NIKKATSU NOIR: Takashi Nomura's A COLT IS MY PASSPORT 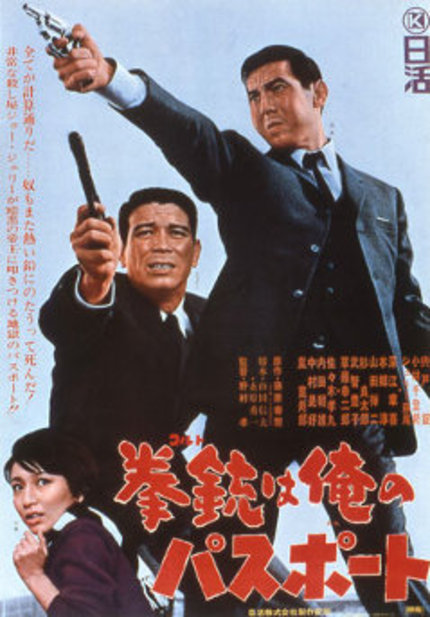 In A Colt is My Passport , chipmunk-cheeked action star Jo Shishido plays Kamimura, a hitman hired by a mob boss to exterminate the head of an opposing group. Kamimura, who runs around with a sidekick named Shiozaki (Jerry Fujio), does the job perfectly. In fact, he does the job too perfectly, forcing his employers to send him into hiding. While in Kamimura is in exile, the rival mobsteam up, leaving Kikimura and his buddy in a bad situation. During their effort to get out of Japan, they are aided by a young woman named Mina (Chitose Kobayashi) who works at duo's hotel hideout.

A Colt is My Passport fuses film noir with spaghetti western conventions. Thus, the viewer is treated to the shadowy, black-and-white photography, the hard-boiled characters, and the criminal scheming of noir, but with a rousing Morriconesque score, big gundowns, and a climactic shootout in a landfill that might as well be a Mexican desert. The black-and-white cinematography is stunning, contrasting the austerity of the city with the grimy sea-side landscape where Kamimura is forced to hideout. Takashi Nomura and his cinematographer Shigeyoshi Mine really go on a tear with all kinds of creative camera work. For example, as characters run towards the camera, the image often zooms in as if the lens and subjects are on a collision course. The camera often zig-zags across the screen to survey the area before resting on the subject of the shot. In the pivotal gun fight, a tracking shot follows Kikimura as he runs from left to right in the foreground, shooting at gangsters who come at him from the distance. One could go on, but the point should be clear.

As with all films in the Nikkatsu Noir box, there are no extras. What one does get is a beautiful 2:35:1 widescreen transfer of a great film with removable English subtitles. The next title to be reviewed is Takumi Furukawa's Cruel Gun Story from 1964.

A Colt Is My Passport

A Colt is My Passport - Todd Brown's review from Fantasia 2007

I am Waiting - Review from the Nikkatsu Noir box set

More about A Colt is My Passport