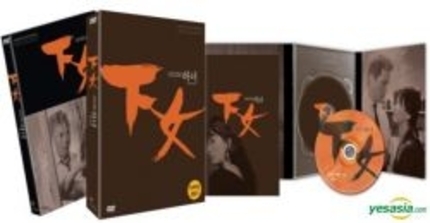 When I reviewed the digitally restored print of The Housemaid at last year's Pusan International Film Festival, I asserted that, when Kim Ki-young's classic was released on video, it would be one of the most cherished DVDs of the year. Having seen the new Korean region-free transfer, I've had to temper my enthusiasm somewhat, though the film still gets the highest possible recommendation. The following is a reprint of that review, along with notes on the Blue Kino DVD.

A tale of sexual obsession without precedent in the history of cinema, The Housemaid, Kim Ki-young’s neglected masterpiece, fairly crackles with blistering intensity, provoking a sensation of horror mingled with delight. A half-century has not diminished the shock-value of the film, which rewarded the viewer with more genuine thrills than Japanese horror filmmaker Shinya Tsukamoto’s half-baked ghost story that also featured in the festival lineup. Stylish direction and caustic wit raise this noirish thriller to the top of the pack.

Dong-sik (Kim Jin-kyu), a middle-aged music instructor struggling to provide for his very pregnant wife (Ju Jeung-ryu) and two small children, unwittingly threatens the domestic tranquility of his home when he hires a mysterious chain-smoking young woman (Lee Eun-shim) to help around the house. Needless to say, steaming rice and pickling kimchi aren’t the duties at which the housekeeper excels, who will stop at nothing to get inside her employer’s pants. A no-holds-barred war of the sexes ensues, with the clueless husband caught in the middle, and the (refreshingly unendearing) children as pawns. A twisted cautionary tale of marital infidelity that may appeal more to fans of Masumura than to those for whom Tokyo-ga is the pinnacle of cinematographic art, a newly-remastered print salvages this classic of Korean cinema from undeserved obscurity, allowing for a fresh reappraisal of Kim’s art.

Like Masumura, with whom he shares a certain spiritual affinity, Kim’s career followed a similar trajectory—from the technical mastery, youthful vigor and keen powers of observation of his early years and the experiments with color in the 1970s—to the tawdriness of his maturity that all too often descended into mere camp. Yet it is by these latter that he has come to be known—to the extent that he is known at all—to a handful of festival goers and cult film fans. Park Chan-wook, Kim Jee-woon and Bong Joon-ho are just a few of of the younger generation of filmmakers upon whom Kim’s legacy has left its imprint.

The common bourgeois household was for Kim a microcosm of the world, which in the aftermath of the Korean War was characterized by rapid urbanisation, exponential population growth, pollution and widespread poverty. The encroachment of Western culture and materialism threatened traditional Korean values. Women were increasingly entering the workforce, while many of the poor ended up in bars, massage parlors and brothels. Kim transformed this chaotic world into celluloid in a way that has been described as surrealist, though the director disavowed any influence of the movement that swept the world in the wake of World War I. From the unsettling (and maddeningly long) game of cat’s cradle that opens the film, to the ubiquitous stairwell, to the grotesquely molded stucco walls of the house, Kim created a setting that was at once familiar and foreboding. The sliding glass door that joins the housemaid’s bedroom to the music room becomes a window through which the spectator becomes a sort of voyeur. Kim, who founded the National University Theater in 1949, and who knew a thing or two about stagecraft, designed the sets and props himself, as well as supervising the lighting.

Eschewing the prevailing realism and humanistic trappings of his peers, tinged with more than a whiff of nostalgia, Kim pursued a boldly expressionistic approach that transcended conventional morality, where raw human passions are laid bare and quaint notions of romantic love are put to rest. Perhaps this is nowhere better illustrated than in comparing the female characters in Han Hyung-mo’s films—by turns adventurous, headstrong and idealistic—to those of Kim’s—manipulative, libidinous and cannabilistic. It is equally impossible to imagine one of Han’s characters drugging her husband and having him undergo a vasectomy (The Insect Woman, 1972), or performing necrophilia on the corpse of her lover (Iodo, 1977), as Kim’s do.

At the screening I attended, the presenter asked for the audience’s understanding, as restorers were still at work removing the burned-in handwritten English subtitles on two of the reels, efforts that will continue until the end of the year. He needn’t have apologized. The digital restoration, a joint venture of the Korean Foundation of Film Archives and the World Cinema Foundation (founded by Martin Scorsese) to commemorate the tenth anniversary of the maverick director’s untimely death in a house fire, rivalled and even surpassed that of any I’d ever seen. The virtually flawless print was, except for the two aforementioned recalcitrant reels, gorgeously luminous, with jet blacks and velvety greys, enabling viewers to marvel at cinematographer Kim Deok-jin’s incomparably beautiful lensing. The legible subtitles were generally free of grammatical errors.

A few months ago, we ran an effusive review of the Kim Ki-young Collection, a DVD compilation (rushed to retailers’ shelves to coincide with a retrospective in Seoul this summer) that we called the most significant release of the year (to which readers may now add Fantom Korea’s Independent Film Collection). We can now confidently assert that, when it becomes available early next year, The Housemaid will be one of the most prized releases of 2009.

Notes on the DVD

Aside from the two problematic reels mentioned above, the digitally remastered image looks very pleasing, considering that the original is fifty years old. Contrast is good, and there are few blemishes, though some scenes appear somewhat bright and shimmering could be detected from time to time in background details, such as the stucco walls of the house. Unlike the stylized font used in the prints that circulated on the festival circuit and which appear in the video streaming over at The Auteurs, the subs on the DVD are standard typeface. The casual banter between Kim Young-jin and Bong Joon-ho on the commentary track and Lee Yeon-ho's essay in the booklet add little to our appreciation of the film. The stills gallery however is beautifully presented and is well worth a look. It is to be hoped that Criterion will deem The Housemaid worthy of the treatment given to Bergman's The Seventh Seal. In the meantime, the Korean release is acceptable and very reasonably priced.