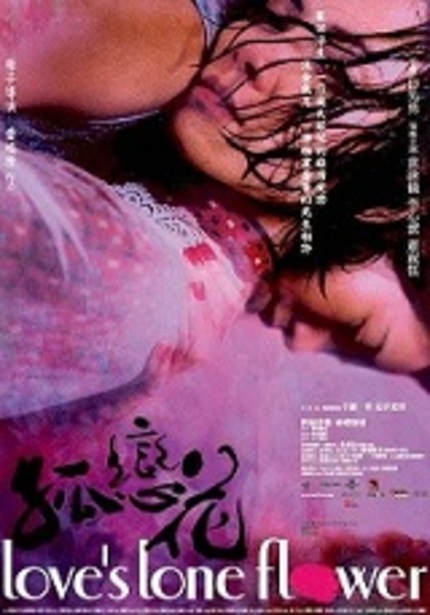 People often fail to credit television dramas are where a great many Asian stars (established or up-and-coming) both cut their teeth and pay the bills. Other than the high-profile productions many go utterly ignored by all but the most devoted Western fans, pigeonholed as artless fluff, but this kind of blanket dismissal overlooks the occasional buried treasure. Why's it worth tracking down Cai Rui-Yuan's 2005 film [i]Love's Lone Flower[/i]? Review after the break.

It sounds the very definition of disposable – a theatrical cut of a popular drama series, edited down for a cinema release largely to wow domestic audiences on the big screen and pad the bill at local film festivals. The lesbian angle, emphasis on unrequited love and period setting suggest any number of tired cinematic tropes done many times before and probably better. Taiwan's film industry has subsisted on this kind of thing for close to a decade. Still, note that Cai Rui-Yuan's [i]Love's Lone Flower[/i] is no idol drama; two of the leads are established actresses (Anita Yuen and Angelica Lee); the plot comes from a respected literary source (a short story by Chinese novelist and academic Pai Hsien-Yung) and the director previously adapted a novel from the same author for television to domestic critical and commercial success ([i]Crystal Boys[/i], 2003).

The story spans two decades, opening shortly after the final phase of China's civil war, when the Communist army captured the capital Nanking in 1949 and the defeated Kuomintang fled the mainland for Taiwan. Yun Fang (Anita Yuen, [url=https://screenanarchy.com/site/view/protege-review/][i]Protege[/i][/url], the animated [i]A Chinese Ghost Story[/i]) is a popular courtesan in pre-civil war Shanghai who runs into Wubao (Angelica Lee, [url=https://screenanarchy.com/site/view/re-cycle-review/][i]Re-Cycle[/i][/url], [i]Koma[/i], [i]The Eye[/i]), a young woman on the verge of being packed off to a brothel by the local gangsters. Yun Fang uses the threat of her connections with the gangsters' boss to run them off, and when Wubao begs her for help, offers the younger woman a place to stay – her kindness prompted first by simple altruism, but later by a growing attraction that's more than platonic.

The narrative skips back and forth between two plot threads. Shanghai is now the past, where a love triangle develops between Yun Fang, Wubao and musician San Lang (TV actor Tou Chung-Hua). Come 1949, San Lang elects to head for Taiwan, and Wubao has to decide between following him or staying behind. The majority of the film takes place some years later, after the two women tried to flee the mainland together, only for Wubao to die in the attempt. Yun Fang lives a lonely existence as the madam of an ex-pat hostess bar in Taipei until she strikes up a halting friendship with Juanjuan (Suzanne Hsiao, [i]Yi Yi[/i]), a young girl working the bar whose innocence and naivete is almost a mirror image of Wubao's. Yun Fang tries to make good on what she sees as a second chance at happiness, but Juanjuan has caught the eye of Ko (workaholic character actor Jack Kao, [url=https://screenanarchy.com/site/view/shinjuku-incident-review/][i]Shinjuku Incident[/i][/url], [url=https://screenanarchy.com/site/view/parking-review/][i]Parking[/i][/url]) a ruthless gangster who wants to drag the girl down with him on the path to self-destruction.

Obviously, there's enough here to make a series – [i]Love's Lone Flower[/i] is edited down from around twelve hours of television to well under two of film and it shows. The pacing is brisk, to put it mildly; backstory, theme, character development all get short-changed to some extent. Angelica Lee's Wubao gets top billing but the theatrical cut leaves the entire Shanghai love triangle feeling a little perfunctory, while Jack Kao struggles to make an impression given his early scenes give him little more to do than turn up, sneer, then leave.

Still, this is a talented cast and their performances come through, even given the vastly cut down running time. Lee has long since had wounded, wide-eyed vulnerability down to a fine art and though she pushes things uncomfortably close to broad television overacting, she gives Wubao a childlike grace that makes it relatively plausible people would fall for her. Suzanne Hsiao is the weakest, though she still manages some presence, and even though her playing of heroin addiction hovers on the edge of generic blank ennui it still lends the climactic scenes unexpected power. Jack Kao starts off almost a cartoon, but the actor has one variation or another of Ko dotted throughout his lengthy resume and two later setpieces, though predictable, give him a chance to show off a sneering, effortless menace that belies any weaknesses in the script.

But the theatrical cut is Yuen's – the actress has long gone under-used since the glory days of Hong Kong's film industry but [i]Love's Lone Flower[/i] is a good argument that audiences have been missing out. Yun Fang becomes far more than an empty cliché, Yuen's performance hinting at all kinds of internal conflict beyond the obvious brought up by the dialogue. The courtesan comes across as someone who accepts with a kind of sad, weary resignation she'll more than likely never find true love, but devotes herself to the objects of her affection because she's a genuinely decent person rather than a narrative convenience. Unlike, say, Tetsuya Nakashima's [url=https://screenanarchy.com/site/view/hiff-report-memories-of-matsuko-review/][i]Memories of Matsuko[/i][/url] there's no suggestion Yun Fang's misery was dreamt up through some sort of bloody-minded vindictiveness on the part of the writer(s), no point beyond which the viewer says 'enough'.

Production design is solid – [i]Love's Lone Flower[/i] is no [url=https://screenanarchy.com/site/view/afi-fest-report-shanghai-dreams-qinghong-review/][i]Shanghai Dreams[/i][/url] or [url=https://screenanarchy.com/site/view/three-times-review/][i]Three Times[/i][/url], but it is relatively glossy, with no jarring anachronisms or inadequacies. The score is never really memorable, but it shows commendable restraint and helps the general atmosphere of winsome melancholy.

Ultimately the film is definitely hindered by its source material, in that it doesn't entirely rise above the limitations of the medium. Quality acting or otherwise, this is still a story painted in very broad strokes that doesn't feel as if it has much more ambition than raising a tear. But it is far more effective and lingers more than first impressions might suggest, deserves more attention than its limited release drew, and for anyone into languid, tragic period romances (or even Angelica Lee's career beyond her role as the Pang Brothers' muse) it comes generally recommended.

The Taiwan all-region DVD is now marked as temporarily out of stock at YesAsia - if you want to bet on it ever coming back in, do so [url=http://www.yesasia.com/global/loves-lone-flower-taiwan-version/1004094734-0-0-0-en/info.html]here.[/url]
The full drama series is readily available on Hong Kong DVD [url=http://www.yesasia.com/global/loves-lone-flower-vol-1-16-end-hong-kong-version/1004435181-0-0-0-en/info.html]here,[/url] but unfortunately without English subtitles.