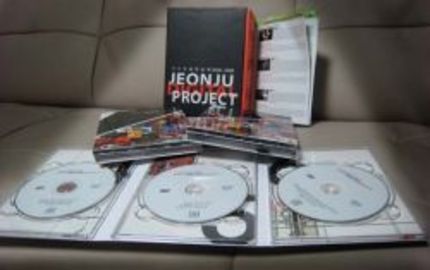 On the occasion of its 10th anniversary, the Jeonju International Film Festival has released a handsomely packaged compilation of 27 shorts by filmmakers from Asia, Africa and Europe. For the past decade, JIFF has been commissioning films from three directors a year, awarding them each 50 million won (USD 38,000) to produce a digital film of around thirty minutes in length. Bong Joon-ho, Zhang Yuan, Sogo Ishii, Shinya Tsukamoto and Pen-ek Ratanaruang are just a few of the recipients who have contributed to the project. Spread out over nine discs, and running from just 12 to 42 minutes in length, the films cover a broad range of genres, encompassing experimental, horror, drama, science-fiction and documentary. The latter address issues as diverse as the hardship of the homeless in Portugal and the plight of Indonesian domestic workers in Singapore; a sobering look at a transit camp for deportees to the gas chambers during WWII; and a decidedly unconventional portrait of a transsexual dancer. Six of the entries in the anthology are by Korean directors. No fewer than four of the films in the collection were subsequently expanded, and one of them, Song-il Gon’s Magician(s), was made into a feature-length film. The Jeonju Digital Project offers the possibility of seeing short films by some of the world’s most acclaimed directors, works generally relegated to the film festival ghetto.

After enduring several hours of non-linear storytelling and self-conscious auteur posing, along comes this simple but affecting documentary about a rural craftsman who makes a traditional Iranian percussion instrument called daf. All able-bodied family members participate in the production, including a blind son, whom we see hitching a ride to market with his sister to purchase the sheep skins and wood planks used in the instrument's manufacture. A doctor visits the father's younger 3-1/2 year-old son, who has also lost his eyesight, and offers this advice: "Pray to God. Give to charity. Have ceremonies and have a dervish play the daf for him." The greater part of the film focuses on the laborious work involved in the fabrication of daf and culminates in a rousing ritual for the ailing boy. The accomplished camerawork takes advantage of the surrounding scenery and local color. Sensitive individuals are warned of a brief but graphic segment of sheep being slaughtered. The image benefits from a solid transfer, with brilliant color and clarity. (5/10)


Like a Desperado Under the Eaves, Aoyama Shinji, Japan. Drama, 41 min.

Meandering tale of a destitute young man struggling to finish a manuscript while coping with an oddball assortment of neighbors and a teetering relationship with a mysterious woman. (4/10)

Structurally similar to Tsai Ming Liang's joyless "A Conversation with God", Park's irreverently playful portrait of Seoul would benefit from a little judicious editing. The film is divided into five sections: 1) "Two Views". Split frame, with busty sex workers on the right, while on the left, seemingly incongruous images appear: a young boy taking a shower, meat in a butcher shop window, and a glove lying in the middle of the road; 2) "Documentary". Firefighters put out a blazing building; 3) "Panorama Seoul". A 360 degree view of the smog-covered skyline as seen from an observation tower overlooking the Han river. Above the horizon, statistics dart past enumerating the number of foreigners, public servants, prostitutes, daily liters of excrement, etc.; 4) "Run Horse Run". A chaotic neon light show of the city at night, to the exuberant strains of Crying Nut's raunchy punk anthem "Run, Horse, Run"; 5) "Digital Search". Graffiti, a kindergarten class and distorted telephoto images of pedestrians. (6/10)

One of the highlights of the collection, Bong's disturbingly humorous mockumentary traces the downward spiral of an unemployed 31 year-old man as he is captured on Seoul's omnipresent CCTVs and observation cameras. The film, divided into four sections, opens with a distant B&W shot of Cho Hyuk-rae (Yoon Jae-moon) standing alone on the Yanghwa Bridge overlooking the Han river. In the first section, entitled "Mr. Cho Works Hard" and announced in bold red letters with a drum roll, our protagonist is seen in a public restroom rehearsing a sales routine with a metal can, leather belt and instant glue before being forceably escorted off the subway by security personnel. Later, joined by an unnamed female accomplice (Ko Soo-hee), Cho is encountered in various underground parking structures, banks and ATM kiosks doing bad things to people. By employing a diversity of techniques: B&W and color, split screen, wide angle, static and panning shots, as well as a liberal dose of black humor, the director keeps the proceedings from becoming monotonous. Bong's film, whose frenzied climax at an ATM fortells the director's merciless skewering of mob behavior in "The Host", has forever changed the way I view subway panhandlers. (8/10)


Dance With Me to the End of Love, Yu Lik Wai, Hong Kong. Science Fiction, 30 min.

A woefully inarticulate and emotionally wraught young actress (Miwako Ichikawa) abandons a film her boyfriend is shooting. One evening, while strolling the streets of Tokyo, she runs into a mysterious woman. A life altering event sees her transported to an island paradise, where she is once more visited by the woman, who informs her that she will be staying, but that the actress must return home, where loved ones and meaningful work await. Deadly dull monologues, monotone acting, and an unsatifsying paranormal twist made this a difficult film to sit through. There is a longer, and presumably duller 61-minute version. (3/10)

The longest and most unabashedly self-indulgent piece in the set, Weerasethakul's ode to the jungle is a boring slog. A young couple runs off to the jungle to find a magical tree; a camera crew trades jokes about Brad Pitt and beer ads; five women do a song and dance routine about finding love; a frisbee-like toy flies through the air; moths flutter around a flourescent lightbulb. Nighttime images are soft and lacking in shadow detail; highlights are burned out in the daytime shots. (0/10)