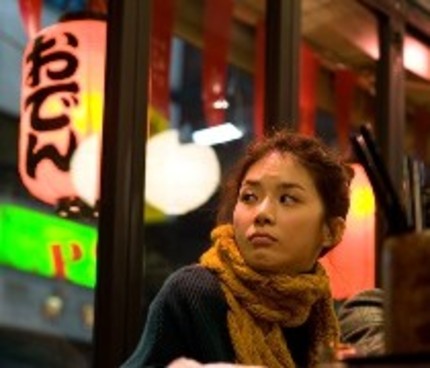 Seems I cannot visit our forum reviews anymore these days without seeing a new review worth putting in the spotlight. Do I even write stuff myself anymore, except introductions? Sigh.
Today's contribution is from loyal forumer Sitenoise, and he has seen a Korean movie that he wrote quite an intimate review for...

The stage is your's, Sitenoise!

This is probably too mainstream for ScreenAnarchy, but I reckon some will like it.

More Than Blue (Seulpeumboda Deo Seulpeun Iyagi), the directorial debut of romantic poet Won Tae-yeon, is in the same league as "A Moment to Remember" ... if you like this kind of stuff. It uses pretty much the standard terminal disease of the week Korean melodrama template: the first half is fun and lighthearted (to set context and set up the sadness); in the first two-thirds of the second half, we watch the knife go in; and in the final third of the second half, the knife is unmercifully twisted.


(More after the break)

Honestly, the first half of this film isn’t very good. Instead of focusing on the couple that are going to face the agony, the director lets other characters tell their story. Problem is, these other characters aren’t any good while the two leads in this film are likable beyond belief and should have been all over the place in our face. Instead there’s the wacky guy with a wacky girl, music industry politics, and a sad, second tier guy who knows, and tells, the story of K who has terminal cancer and is in love with his best friend Cream but since he’s dying he doesn’t tell her. The Korean Times observed, correctly, I think, that while the theme is familiar it “feels more classic than cliched”.

After getting all that plot out of the way of the story the director zeroes in on what he really knows: the poetry of sadness and love. When he gets to this point the direction becomes quite inspired, the acting improves, the soundtrack comes alive, and the whole visual experience elevates a notch or two. There’s a scene in a church the director takes to Godfatheresque operatic proportions without shame.

Sang-Woo Kwon ("Once Up on a Time in High School", "Volcano High") as K pulls out the wounded puppy dog eyes to great effect. But we also see that he is full of love. We can see clearly the range and dynamics of his hope and despair. He delivers with great subtlety.

Lee Bo-Young ("A Dirty Carnival") as Cream, is a Korean actress home run. Beautiful and natural. I was mesmerized by her (performance). Maybe this movie really stinks and I just fell in love with another Korean actress, but I don’t think so. She wears several different hairstyles in the film and wears them all beautifully and naturally. Up, down, all around. They create different shades of her character and don’t look like different hair-dos; they look like she’s just wearing her hair differently. She seems very at home in the role. She plays loveably, attractively, confidently high-maintenance. And she cries well. She’s seductive and childish. She’s my everything.

Lee Beom-Su ( "Singles" ) plays the good man who K tries to fix up with Cream. K wants Cream to have someone who will care for her after he’s dead. (Story) Jeong Ae-Yeon plays the good man’s financé. She’s a hot and sexy photographer and she smokes a lot. (Cigarettes and toothbrushes play major thematic roles) She brings more plot to the film. K has to get her to call off the marriage so the good man will be free to marry Cream. She agrees on the condition that K let her photograph him as he is dying. She’s intense (she smokes, remember?), and begins to question K’s resolve to die without telling Cream how he feels. She calls him a fake and says “When you’re hungry, you eat. When you’re hurting, you cry. When you’re having fun, you laugh. Not hold it in like you. Do you want to Die like this?” When K responds “No. I don’t want to die like this” we really feel the knife twisting.

Strange thing though: the film didn’t make me cry. I found myself thrusting my fists in the air, in a very sports-like manner, at how well directed, and how well acted were the scenes that were supposed to make me cry. Once this film reaches the second half and leaves the detritus behind it’s like floating on a cloud. The director takes a few chances, but he’s getting us high so we give him all the slack he wants. He incorporates twists, some in story and some in the telling of it. The film becomes very poetic on many levels. If you think the twists work they’ll seem brilliant. If you don’t, you may frown upon the whole thing. I’m, of course, not going to say what they are, except to say I think they work and give the film a unique spot amongst the ranks of Korean high-art melodrama.

4.5/5 stars (even considering the crappy first half)

Right up my alley! Thanks for the tip!