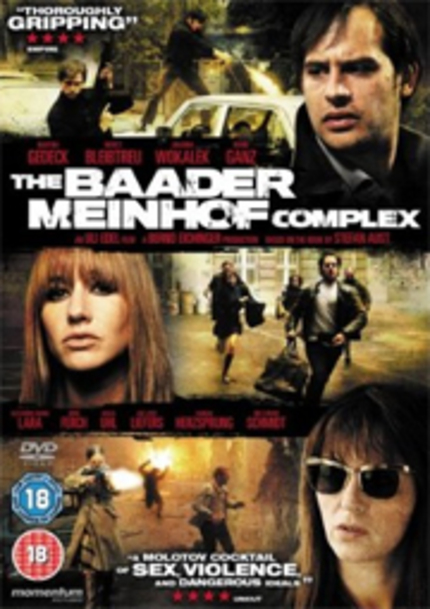 Bernd Eichinger, acclaimed producer of The Downfall, returns to tackle Germany's turbulent past in Der Baader Meinhof Komplex, documenting a decade of the activities of the Red Army Faction. Based on Stefan Aust's authoritative book, the film, one of the costliest yet made in Germany, brings together a cast of some of Germany's leading actors and technicians. There have already been numerous films and theatrical productions dealing with the RAF, including Volker Schlondorff and Margarethe von Trotta's film, The Lost Honor of Katharina Blum (1975), and Schlondorff's own The Legend of Rita (2000). But Eichinger, who co-wrote the script with director and close friend Uli Edel (Christiane F.), says his aim in making a new film was to remove the aura of mystique that has enveloped the group.

The German student movement began in 1961, when the German SDS was excluded from the SPD (Social Democratic Party), one of Germany's three major parties. That prompted the concept of the APO, an opposition movement outside of the parliamentary system. Inspired by the American civil rights movement, as well as by the German pacifist and Christian movements, the German student movement demanded a democratization of the educational system and denounced what they saw as America's imperialist ambitions. On June 2nd, 1967, Benno Ohnesorg, a young university student, was shot dead by a police officer during a non-violent demonstration against the Shah of Iran's visit, culminating in widespread support for the left-wing student movement. The leftist movement had a large number of splinter groups, of which the RAF was the most extreme expression.


Beginning with the incontrovertible strengths of the movie, the producer and filmmaker have gone to great lengths to reconstruct the events and the places depicted in the film as accurately as possible, using newsreel footage and photographs from the era to recreate the look of the period, and the results look thrillingly authentic. From the anti-Shah protests at the Deutsche Oper Berlin in 1967, the 1968 Vietnam Congress led by Rudi Dutschke and his attempted assassination shortly thereafter, to the blockade of right-wing publishing house Axel Springer, the climate of jubilant youthful rebellion and shatteringly real violence are vividly portrayed. Viewers anticipating a lot of action won't be disappointed either, as over a decade of murders, kidnappings and hijackings are compressed into the film's 145-minute running time.


The film benefits too from the fine performances of several notable German actors, among them, Martina Gedeck (Meinhof), Moritz Bleibtreu (Baader), Johanna Wokalek (Ensslin), though Bruno Ganz as police chief Horst Herold was sorely miscast, and Meinhof’s character wasn’t as fully developed as it might have been. From a solely dramatic point of view, it might have been expected that the juxtaposition of the wildly dissimilar personalities of Meinhof, the media-savvy activist, and Baader, the explosive and unpredictable leader, would yield more fruit, but it is Wokalek's fine performance that provides the real fireworks.


On the other hand, by choosing to narrow in on the widely publicized actions and brutality of the group, the film lacks a real political and ideological context that would have made for a more engaging and challenging experience. The numerous newsreel clips inserted throughout the film needlessly lengthen the movie, while leaving little room for the philosophical and intellectual currents that informed the group. Consequently, the film lacks any real depth or psychological insight, and the story drags on after the principal leaders’ incarceration and subsequent trial, one of the longest and costliest in German history. When the end credits roll, we recall the elaborate set pieces and some fine performances, but are left with little understanding of why millions of Germans supported the RAF in the seventies or why the group continues to fascinate so many around the world today. In the end, the film sheds little light on the true motivations of the group and its impact on society.

A handful of directors have given us more compelling portraits of Germany’s recent past and present, for example, Edgar Reitz’s magnificent Heimat trilogy, and more recently, von Donnersmarck’s The Lives of Others and Fatih Akin’s outstanding The Edge of Heaven. And looking further back, even Rainer Werner Fassbinder’s Mother Kusters Goes to Heaven had more artistic integrity and psychological truths about how radical groups operate and manipulate their followers. Perhaps pure fiction is better able to convey artistic truths better than a well-intentioned but misguided adherence to reality.


The DVD
The excellent Momentum DVD (UK, Region 2) faithfully reproduces the ever so slightly grainy look and desaturated palette of the film while maintaining excellent contrast and shadow detail.

Order the DVD from our affiliate