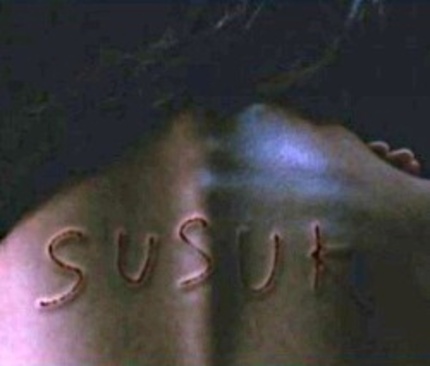 Touted as "The First Muslim Lesbian Vampire Movie!" by co-director Amir Muhammad, "Susuk" was indeed an odd-one-out in the Hungry Ghosts segment of the International Film Festival Rotterdam.
For starters it didn't feature any ghosts.

Instead, the film is more a morality tale about the use of black magic, and even wanders a bit into "Monster Movie" territory.

It is a very schizophrenic movie though, both intentional and unintentional. "Susuk" has been cleverly made, looks very glamorous and is mostly successful in entertaining its audience.
Yet it also strives to replicate the trashy exploitative horror films so abundant in South East Asia, which may be nice and funny but hurts any tension the movie tries to build, and ultimately makes it fail as a horror film.

The plot follows two women in the entertainment industry and their experiences with Susuk. In Malaysia, Susuk is a magical ritual which is supposed to help its practitioner achieve wealth, beauty and success. It consists of a priest inserting small valuable objects under your skin. The use of Susuk is forbidden by Islamic law, but that is not the only taboo a user should be concerned with, as the more powerful versions add a lot of rules to be followed.

Soraya is a nurse hoping to become a singer, and when she is introduced to the practice of Susuk by an older actress she is intrigued by it. Early small experiments do not seem to help much, and slowly but surely she wants to use stronger versions of the ritual like the "Royal" Susuk, although these are also more dangerous.

On the other end we have Suzana, a famous singer who has been at the top for five years and is determined to stay there. Knowing her use of Royal Susuk is responsible for her success she has become a slave to it, desperate not to break any of the many taboos she must now abide by. For breaking even a simple one like "crossing water in daytime" turns her into a fanged monster until she revokes the taboo by killing people...

Ah, vanity! It's an old tale, the damnation of one's soul to achieve eternal youth and riches. The lengths to which people go in this film to achieve it, and the price they end up paying, are not exactly unexpected. Yet the movie starts with Soraya who is nearly angelic. Her problems as a nurse do not originate from vanity or arrogance, but from general misogyny, and this is what cultivates her desire to become a star. From then on the film takes very long time to show Soraya taking the decision to start playing the game dirty by using black magic, and it also includes a gritty extra subplot about spousal abuse. Yet the movie never becomes too serious because of the intercutting with the Suzana storyline, in which people are being killed by a flying witch-creature with long nails and curly teeth. Although the film certainly tries to avoid being censored to death it doesn't really pull too many punches on the gore front, presenting skinned bodies and a slimy disemboweling. If only the creature pulling at the intestines would have looked a tad more convincing, this might actually have had some sort of an impact.

And this exposes the movie's biggest flaw: it is not scary. Whenever the proceedings turn supernatural, they also become camp. This is obviously intentional, and especially Adlin Aman Ramlie is delightfully evil as the "Mystic Medium" (I hope for his sake the voice he has in this film is a dubbed one...), but it prevents "Susuk" from becoming a true horror movie. Instead it gets stuck with being occasionally creepy, with one or two cheap scares (thankfully of the non-fake variety) added for good measure.

And a note to anyone who wants to use an "ugly duckling turns into beautiful swan" storyline: make sure your duckling is ugly first. Diana Rafar (who plays Soraya) is one of the prettiest people on the planet, and is so from her first minute in the movie onward. When her Susuk finally starts to work a bit and gives her some extra "glamor", this is shown by her wearing more make-up and slightly more slutty outfits. This comes down to her being so covered in paint that I see less of her face, and the outfits (while appreciated) also take away a lot of her innate cuteness.
When she gets to the "Beautiful Swan" stage all I could think was pfff, nice but I think I preferred her as she was in the beginning...

After the screening Amir Mohammed was on stage for a moment, providing people with a Q&A, and he is surely one of the funniest people to get near a microphone. As always his descriptions on Malaysian politics and the local movie industry were, to put it mildly, scathing (most of his earlier movies have been banned...). He wasn't sparing himself either though: he quickly pointed out that on "Susuk" he was working for those very same people and how nice all those benefits suddenly were when working with big money behind you.
He also explained that the story of the film was inspired by a female star in the fifties who remained looking good for so long that people were convinced she had to have used Susuk to achieve that. This belief went so far that after her death, local priests refused to bury her, demanding that her Susuk priest come forward to take the Susuk out of her first!

Also, Amir's overview of the history of the practice of Susuk ended with "...and these days we just use Botox, like the rest of the world".
Very funny stuff, maybe I should try and find some of his books.

It's easy to condemn "Susuk" as a fluffy piece of utter nonsense. The movie is silly, will not win awards for acting, has a daft-looking monster and is not scary at all. It is also too long and has an anticlimactic ending.
But on the other hand it uses some clever scripting of events, shows its exploitation roots with pride and provides the viewer with an abundance of flashy visuals (including an absolutely gorgeous lead actress).

All in all it's just too damn fun a package to call an outright failure, as I sure enjoyed myself enough while watching it. I'm not sure who exactly to recommend this to, though...
The Rotterdam audience was similarly in two minds, and awarded it with a 3,0 out of 5.

Michael's review
The Susuk page on the IFFR-website