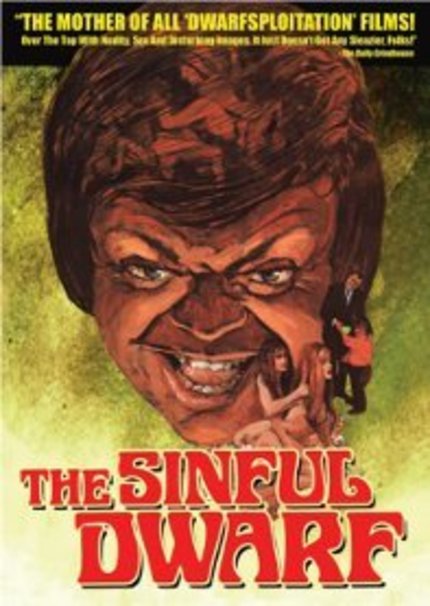 In the 1990s, Something Weird Video struck a deal with producer and distributor Harry Novak to release many titles from his company Box Office International on VHS tape. One of the titles that stood out from weird, sleazy flood was a Danish film called The Sinful Dwarf (Dværgen) . In addition to the usualy cheap thrills, the movie had a rare, secret ingredient: a drooling, perverted dwarf. When Image Entertainment released dozens of Something Weird titles on DVD, The Sinful Dwarf was allegedly skipped because the company thought it went too far. Now, Severin Films has released the film on U.S. DVD so people can judge for themselves.

Torben Bille plays Olaf, who lures young women into his alcoholic mother's house. Once he gets them in the house, which no reasonable person would ever willingly enter, he locks them up, pumps them full of heroin and sells them as slaves. A daft young couple with forced English accents show up to take a room but after what seems like an eternity of obvious clues, they become ensnared in the nasty schemes of Olaf and his mom. A fat bearded drug dealer named Santa Claus, who uses his toy store as a front to smuggle heroin, figures prominently in this mess.

The Sinful Dwarf is fundamentally a cheap, crude sex movie but it has two exceptional features. As previously mentioned, the main attraction of this film is Torben Bille. He ambles and skulks around like a evil kid. The way the camera often focuses tightly on his twitching, slobbering face is a funny as it is sickening. The other interesting aspect of the film is the way its is edited. Innocuous moments, usually involving toys or bad humor, are consistently juxtaposed with loathsome or offensive acts. It is a dubious but effective way to link the filthy scenes to the rest of the movie.

The Severin disc features what seems to be the full-frame U.S. theatrical version that was released by Something Weird except the source is considerably cleaner. The extras are minimal, and include a theatrical trailer, two radio spots, and a short featurette. The Sinful Dwarf is far from being the sleaziest or most offensive movie ever made but its scuzzy ambience and deranged sense of humor give it a undeniably dank allure.

More about The Sinful Dwarf