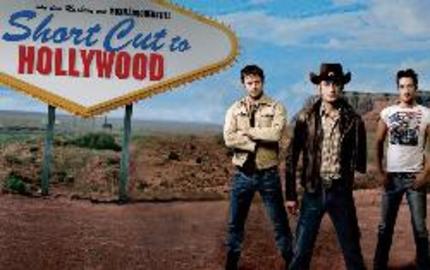 Fame makes people crazy. That's so obvious these days that it barely needs stating. And the lust for fame? Well, there are a host of reality shows on television every night only too happy to show what lengths people will go to for their time in the spotlight. But seldom before has anyone gone quite so far as Johannes, the woeful insurance salesman a the heart of Short Cut To Hollywood.

Johannes is in a rut. A rut so big tat he's worn it down into a full sized pit. He hates his life but sees no way out. His best friends are a bankrupt used car dealer and an alcoholic veterinarian, both of whom arguably have more going for them than Johannes does. The highlight of his week is his regular trip to a therapist at which they engage in a long standing competition to see who can go the longest without saying anything at all, a competition that Johannes invariably wins. The only thing that makes Johannes and his pathetic cohorts stand out from the masses whatsoever is their band, the trio belting out horrible little pop songs in dive bars that nobody else is willing to play in.

Fully into middle age with no skills and no discernable talent there is, of course, only one route for Johannes to take. He will go to America and become famous, America being the place where skill and talent are not prerequisites to fame. All you need is a plan. And Johannes very definitely has that. With the help of his friends he will adopt a new, more flamboyant persona – John F Salinger – chronicling his inevitable rise to fame on film, attracting attention to himself by cutting off pieces of his own body and promising to soon kill himself on camera. His real life back home so hopelessly worn out Johannes will achieve a type of immortality in a truly memorable – and very, very public – death.

The third feature written by, and second directed by, German comedian Jan Henrik Stahlberg, Short Cut To Hollywood cements Stahlberg's place as one of the most unique and pointed satirists on the face of the planet today. Though Short Cut is unlikely to rise to the international prominence of his debut directorial effort – and second writing effort – Bye Bye Berlusconi, it is nevertheless one striking piece of work, one that makes a fascinating companion piece with his debut script – the criminally under seen Quiet As A Mouse – with both features sharing a moc-doc format and taking a dry delight in ripping into American public persona. Yes, the reality television element of the film is an overly obvious one – the reality of reality tv being so banal that it scarcely needs parodying in the first place – but seldom has the vapid nature of modern celebrity been attacked with such a compelling blend of savagery and, oddly enough, legitimate humanity.

In many ways Stahlberg fits much better with the satiric tradition of a Jonathan Swift than with any of his contemporaries. While Jon Stewart pokes fun at doublespeak and inconsistency, Armando Iannucci dazzles the room by obviously being ten times as smart as anyone else in it, and Chris Morris howls with anger, Stahlberg's specialty is putting a human face on the absurdity of modern life and then pushing things out to their logical extremes. Like Swift he proposes that we eat the baby and then shows what happens when we do. When on his game Stahlberg is just as angry and clever as the others but also far more humane, far less prone to stop with his own anger or own cleverness as a conclusion, instead opting for conclusions far more realistic and – appropriately – far more tragic. And while he's not consistently on his game with Short Cut To Hollywood – I find Quiet As A Mouse both a funnier film and a more satisfying one on the whole and would kill for an English subtitled copy if anyone knows where I can get one – the parts that work, which make up the large majority, are positively brilliant.

If Stahlberg were American or British he would be a household name by this stage of his career. But he's not. He's German. And when it comes to generating international notice being German doesn't get you real far, sadly, and so he continues to work in relative obscurity outside of his home country. A true shame, that, as he's one of the best there is.