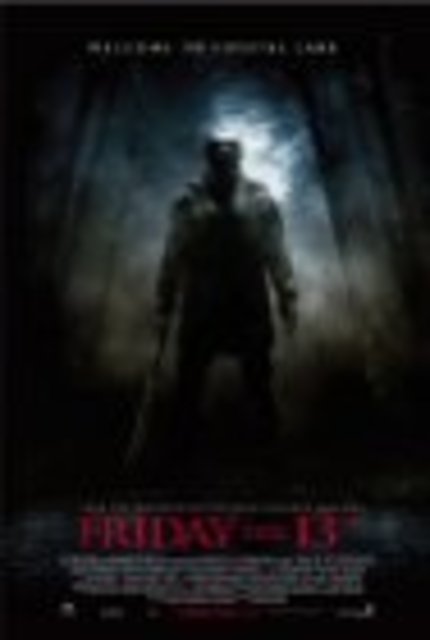 Complete with all of the unhealthy trappings we’ve come to expect from a “Friday the 13th” film, comes this reasonably pleasing, polished new remake. Despite director Marcus Nispel and producer Michael Bay’s attempts to somehow retain the key qualities of the original “Friday the 13th” series while simultaneously stripping away its primal allure in favor of a false “grungy gloss”, this rebooted, re-imagined, re-done version (call it what you will) is imminently watchable. That’s more than can be said for the previous Nispel/Bay horror remake, 2003’s unevenly grimy “The Texas Chainsaw Massacre”.

This film effectively compresses key plot qualities (if you want to call it that) of the first four “Friday the 13th” movies, thus proving their repetitive nature (as if there was ever any doubt about that). With its obvious Hollywood production values, the new “Friday” can’t hope to match the (perhaps unintentional) aesthetic savagery of that source material, which results in a mixed bag of good and bad news for fans. It doesn't bring anything necessarily new to the table, but in its defense, I don't think it's trying to. It is better-acted and marginally more clever than the films of the original series, while still falling comfortably into that slasher/bodycount film mold.

Yes, I know that some of the later, more self-aware films featuring Jason Voorhees were also bigger-budgeted, semi-glossy affairs. With that in mind, I’d rank this film after the imminently more creative and fun “Freddy vs. Jason” (no Freddy equals less fun. Sorry Jason fans!), and then just below the head-scratchingly space-based goofball “Jason X”. Don’t worry, it’s infinitely better than “Jason Goes to Hell” – but then again, so is actually being killed by a masked slasher. When it comes to the older Paramount Jason films, I prefer “Part VI: Jason Lives” as the most all-around solid, and “Part 3-D” for the unintentional laughs of the forced, lame 3-D gags (especially when experienced in 2-D). I base these preferences on having seen each of those films once, around fifteen years ago, so I may or may not still agree if I were to revisit them today.

But let’s take an obligatory moment to consider the allure of “Friday the 13th”. Yes, there are plenty of attractive girls who shed their clothes (this film doesn’t skimp in that department), but it’s also a little disturbing that we are in essence going to the movies to see the said girls (and their dopey dope-smoking boyfriends) get axed to death? Clearly, a great many people grew up watching these films, and no, we did not turn out to be death-crazed masochists. But at some point, we must look in the mirror and realize that this is some pretty psychologically unhealthy stuff. My own draw to films like this lies in my appreciation of a well-executed bravura gore effect. That, and the primal fear of unknown, unprovoked, and unstoppable death emerging from the darkness of nature.

The cold iconography of the hockey mask doesn’t hurt, either. I simply doubt that there would’ve been ten-plus movies about Jason Voorhees had he simply continued to wear a cloth sack on his head. For me, and so many others, Jason is almost someone we’re stuck with. We know he’s not really ever going away for good, and like human sin itself, he has a habit of continually re-emerging. We turn the corner, and yikes, he’s back! As the bulk of the cast is inevitably reduced to blood-drenched window-dressing at a certain point, so too are our own moral defenses. So once again, we indulge. We see the next movie. In a very odd way, Jason provides a look into the mirror of fallen humanity, and our own shortcomings. In an unlikely way, the more Jason comes back (and of all the movie slashers, he comes back the most often), the more powerful this metaphor becomes.

Of course, Jason is also the ultimate cinematic momma’s boy, a supernaturally angry repressed preteen boy lashing out at the emerging deviance that comes for many when childhood innocence (and parental need) is left behind. For Jason, that deviance cost him his life, thus pushing his mother over the edge, and that costing her life as well. Hence, we have the overly repeated motif of death by impaling, stabbing, penetrating. That is what Jason does, ad nauseam. So when this film ventures into torture porn territory for a fleeting moment early on with an elaborate (by Jason’s standards) death rig involving a sleeping bag and fire, it is decidedly out of character for him. Thankfully he never tries something like that again for the run of the film, as Jason’s murder style is the only recognizable character trait that we the audience have to know him by.

Being a fan of the series clearly is not necessarily something to be proud of, but at this point in our media-hardened culture, no one feels the need to apologize, either. Political correctness and gender equality has never exactly been on the radar for this series, and that’s still true this time. The closest this movie gets to any such thing is with its transparently racially diverse cast of teen revelers. Stoner Asian guy? Check. Black guy who’s dialogue consists entirely of witty barbs about the fact that he’s black? Check? Uptight selfish white dude? Check. And of course the well-meaning, virginal heroine? Check and check.

The few creative elements that Nispel and company brings to the table, while not altogether fresh, are a welcome infusion of storytelling finesse to the franchise. Again, no one is reinventing the wheel here, but the effective compression of the first three original films is done in a way that is as engaging as one could expect from an effort such as this, which is clearly committed to staying within all the established “Friday the 13th” parameters. Nispel’s limited strengths lie in his no-nonsense, cut-to-the chase framing and pacing. I personally don't care for the Michael Bay/modern horror aesthetic (the pro lighting sheen and overly dressed sets, etc.) that results from revamping old down-and dirty movies with an obvious Hollywood budget and talent pool. But this was more imminently watchable than your average horror remake. When approaching this film on its own terms, this new “Friday the 13th” is a good time at the movies (and nothing more) for those who go for this sort of thing. It will tide them over until Jason’s inevitable return, anyhow.

More about Friday the 13th