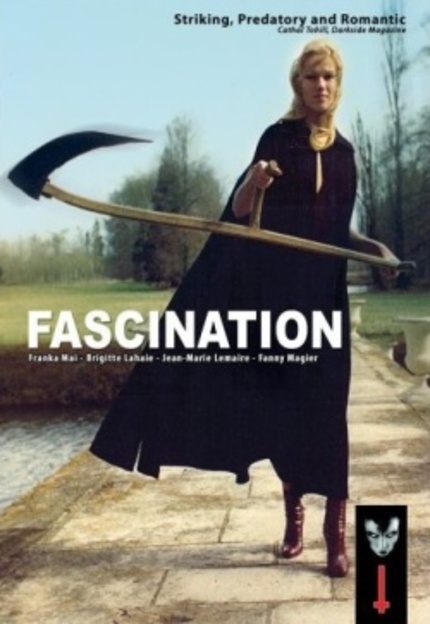 Welcome, registered visitor!
(And if you registered today, welcome to ScreenAnarchy!)

To say that Jean Rollin's movies are an acquired taste is an understatement. Few directors have such a disdain for what most would regard as essential narrative.

Yet the man has his fair share of fans, for various reasons. Some praise the dreamlike quality of the cinematography, some admire the ambitious seriousness he brings to even the silliest stories.

And some just want an arthouse excuse to goggle at nude women of the seventies Eurotrash variety.

With the previous DVD out of print for some time, fans will be happy to know that a new edition of Jean Rollin's e(u)ro-horror-thriller "Fascination" was recently released.
Does the film deliver on the expected Rollin trademark weirdness and thrills?
Will this disc do the movie justice?

Read on, but be warned: some NSFW content lurks within...

Believe it or not, there is a story this time.

A rogue has a falling-out with the band of robbers he employs, and has to run for his life. Wounded, he flees into a large mansion in the middle of a pond, accessible only by way of a single footbridge. He finds the place abandoned but for two young women who he takes hostage. The two damsels seem both shocked and delighted by his appearance and implore him to stay till nightfall, so he can meet the guests of the party they're preparing.

Soon, the visitor has to decide which place is the least unsafe: outside where the robbers are laying siege to the mansion, or inside, where the behavior of both women is fast becoming more and more erratic. They seduce him, threaten him to leave, beg him to stay and even try to lick his wounds!

But things really go crazy once the girls decide to deal with the gang of robbers outside, and the guests start to arrive...

If you’re about to watch a Jean Rollin movie, you know you can expect a nonsensical story, nice visuals, gratuitous nudity and some violence. At times the movie will look like amateur hour, at times Rollin will surprise you with his technical capability.

“Fascination” completely fits this expectation. Acting and story are beyond laughable, with all characters seemingly suffering from inexplicable moodswings. And if you’re watching for sex and gore, there are other films which will be far more rewarding than this one.

But "Fascination", trashy though it is, has a few trumps up its sleeve. Nearly every shot in this movie has been composited until you can use it as a painting. Even in the most throwaway scenes attention has been paid to the colors people are wearing, where they are in the frame etcetera.

And the main location is cleverly used. When the band of robbers decide to try and storm the house the camera swings wildly from door to window, to another window, back to the door again, following the protagonists in a few very clever shots. There is never any doubt where exactly the inhabitants are and where the assailants are.

As for the sex on display: the nudity is almost completely unneeded, but Jean Rollin seems to be thinking that heck, since nudes have been fully accepted in paintings and sculptures for centuries already, why not in put them in his movies? If a composition is more pleasing to the eye if it has nudity in it, Rollin will use it. Even the lesbian scenes do not seem particularly aimed at titillation but seem to be just part of that typical Rollin universe. Maybe this is because he shot "Fascination" between a couple of hardcore porn-movies (for those he used his pseudonym Robert Xavier) and wanted something different? Who knows.

Actingwise, the people here all look like mannequins and play their parts nearly as caricatures of the roles they have in the story. The exception is Brigitte Lahaie, who may look like she is put there just for the eyecandy (she wouldn't have starred in movies like "Six Swedes at a Pump" if she had been ugly), but becomes a different screen presence altogether from the moment she takes on the gang of robbers. As a female terminator she exudes a cold menace, and she gives a "You're dead!"-look few can best. And while the murders themselves might not be too gory, they are shocking in their suddenness and ferocity.

In this sense, the most famous scene from the film (justly Brigitte's) does pose an interesting question. When a fully clothed woman with a switchblade squares off against a mostly nude woman with a scythe, which of the two is truly more naked?

But in the end, when all attempts for characterization go out of the window in a daft finale between the remaining protagonists, the viewer is left shaking his head.

Basically, this is "I Shot a Bunch of Things I Liked, part 21" by Jean Rollin. As always you can easily shoot the movie down if you are inclined to do so, yet there is also lots to like in there, glimpses of what Jean Rollin might be capable of if he was more focused. Or rather, if he was more focused on other things.
So It is definitely recommended for Rollin fans, but for all others I say give it a try but expect the usual trappings of dated horror and European tr... eh... arthouse genre movies from the seventies.

The version I have is released by Redemption but there is a remarkable shortage of crucified naked women on the cover, nor do they mention any "satanic sluts" on the backside. Gosh, have they suddenly gone tasteful?
No fears there: the 50 second Redemption-USA intro almost contains more blood and bloated tits than the movie which follows it. Still, I'll stop my bashing here because it seems this distributor is making an honest attempt to increase the quality of their recently released discs. And "Fascination" is a good example of this. What extras there are make sense, and the copy of the movie they've scored is not a bad one. Oh, and it's regionfree, which is always cool.

Video first. The bad news is that the resolution of the picture is low (only 640px wide), it shows combing and the print has some damage in the form of very thin cables in a few scenes. The good news is that the print shows colors nicely (important with this film), there is no horizontal overscan and the movie was shot quite soft, so the low resolution doesn't do much damage.
Audio next: we have the original French soundtrack with optional subtitles.
In short: it seems Redemption did the best they could here.

Now for the extras: Redemption has included the trailer and a stills gallery. The stills are mostly screenshots from the movie (and therefore sort-of senseless), but some are actually from lobbycards. Unfortunately these were cropped to just show the picture, not the border, so the gallery as a whole fails to impress.

But next in the extras is a selection of trailers from other Jean Rollin movies. There are two: "The Iron Rose" and "The Nude Vampire". Setting these apart from the other Redemption adverts is a nice touch. Alas, no short movies this time.

The rest of the extras are trailers for two other (non-Rollin related) titles: "Nature Morte" and... hey, there they are! "Satanic Sluts: the Black Order Cometh". Truth be told: it wouldn't really have been a Redemption disc without it...


So there you have it: if you like the movie, this disc is not too bad, I've certainly seen worse.

You can order this edition through our affiliate.
My other Jean Rollin review: "The Nude Vampire".