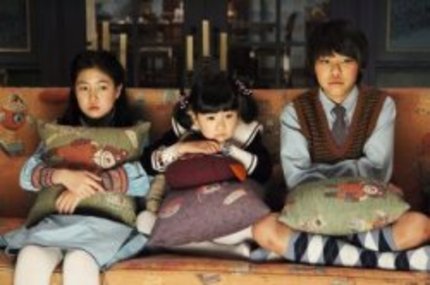 God bless the South Korean film industry. Despite a current lag in quality productions (gone are the boom years of 2000-2006) coming out of Chungmuro, there is a certain type of genre-mash that seems to thrive there better than any other part of the world. Compare the balance of Twilight Zone eeriness, and sweet visual palette in Im Pil-Sung's Hansel & Gretel to the simple vulgarity of Terry Gilliam's Tideland (out of Canada), or the handsome flatness of Krabat (out of Germany) to see what sort a re-envisioning of a Grimm tale is possible. I cannot call Hansel & Gretel a perfect film. Far from it. There are some major stutters resulting from questionable pacing and structural choices. Yet handsome production design, talented children actors and a willingness to take the story to some dark places make the lengthy running time and directorial excess well worth the trip.

While driving between business meetings, Eun-Soo is arguing with his wife on his mobile about not spending enough time at home with their new baby. As if the world doesn't need another reminder about handling a cellular phone while operating a motor vehicle, something on the wet road causes an hasty and ineffective swerve that lands the vehicle wrapped around a tree a ways into a dark wooded area. He awakens to find a young girl of about 12 standing over him with a lantern. Yes, a lantern. Upon dazedly following her though one of those dark and dense forests that exist either in the mind of someone wandering by themselves alone at night, or in the set-design of horror movies, they eventually come upon a house in the middle of the forest. No roads or pathways (or breadcrumbs) lead to this house. It simply exists there. When the sign on the house reads 'Home of Happy Children' and three children and two parents stand there with unusually creepy smiles on their faces, you kind of pull for Eun-Soo to get the hell out of there. Lord knows he tries, several times, but each attempt (Groundhog Day style) leads him back to the center of (his words) the Bermuda Triangle. Inside the cottage it is like a Burton-esque Christmas Town as decorated by the villagers in The Wickerman: A smorgasbord of pastel-iced cupcakes for breakfast, lunch and dinner and wiccan imagery, mostly rabbits, permeate the wall paper, stuffed toys. The capper is a crazy cartoon, involving one bunny tearing the limbs off of another which plays in loop on the TV (not plugged in natch). The adult, Eun-Soo, is very much the hero of the tale (perhaps flipping the natural order of a fairy tale) and he is unwillingly thrust down the rabbit hole and into murky history of the place to forge himself into a better parent.

If only Im Pil-Sung decided to tell his tale in a more coherent, less visually busy fashion, the film may have reached the level of artistry achieved in A Tale of Two Sisters. Yet, a multitudes of flash backs, perhaps a flash-sideways and the need to constantly change the lighting and camera-technique threaten to wash away the very compelling tale of children unable to actually grow up and mature because their every whim is met. Those familiar with the themes and conclusion of the original Grimm fairy tale Hansel & Gretel may clue in early to what exactly is happening. But credit should be given to the clever inversion of things here. Compared with destitute parents having to abandon their children in the upheavals of 1800s Europe, in the modern age of parents over-indulging their innocent little snowflakes, too much influence in the hands of the immature little minds can become something dark and twisted (even if the intent is not necessarily malignant). Yet things are not that simple either. Still as in the classic fairy tale, it is the adults that are the problem. And trust is a pretty big issue. Twists and turns abound here. Suffice it to say that a wary viewer will see much of what is coming in the film, yet for all that is piled on here in the more-is-more approach taken here (I cannot vouch that the directors previous Antarctic Journal takes the same approach, but I know that film has about a 50/50 split of fans and detractors) there are going to be a few surprises to even the most jaded been-there-done-that aficionado of the Rod Serling and M. Night Shyamalan. In an attempt to give a bit more 'aha!' to the ending the result is a slightly shaggy and rushed feel. Yet buried beneath all the brouhaha there is a warning of many forms of wanton evil and casual indifference out there in the world, something that Jacob and Wilhelm Grimm were trying to do in their chosen medium back in the early nineteenth century. Their spirit is alive and thriving, even in a part of the world as unlikely as South Korea.