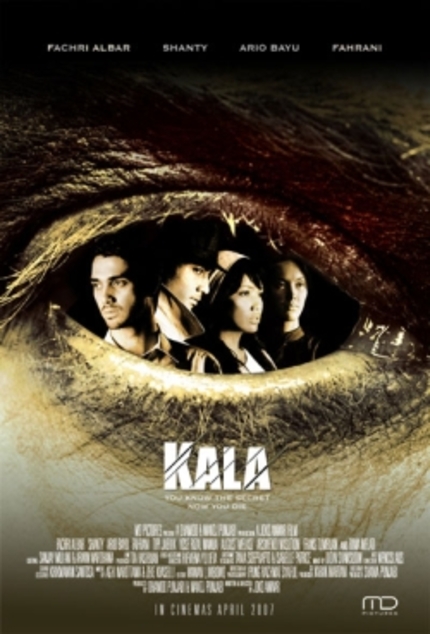 Something strange is afoot in Joko Anwar's supernatural noir Kala , which takes place in an unnamed city in an unnamed nation. Eros is a detective who investigates the murder of a group of men killed by a mob operating freely under a new morality law. Janus, a narcoleptic journalist, is pursued by mysterious men after surreptitiously recording a conversation involving the wife of the murdered man. These two people's lives are further entangled after one of Janus's friends is killed, and Eros is put on the case. As time progresses, it is revealed that these separate threads are all linked through both supernatural and human mechanisms.

Kala is a beautiful film that was made to be viewed on the big screen. The clothing, settings and music invoke film noir but without tying the film to any specific period of time. The rich mixture of dark, neutral colors and sepia tones bolsters the dreary, smoky atmosphere. This rich visual environment supports what is, for the most part, engaging and suspenseful storytelling. Anwar's script puts out a lot of information over the course of the film, and he slowly but surely brings it together. There is, however, an aesthetic incongruity between the ending and the rest of the film that is a bit jarring. Fortunately, the rest of the film is strong enough to withstand Anwar's weird nod to modern horror/sci-fi visual styling.