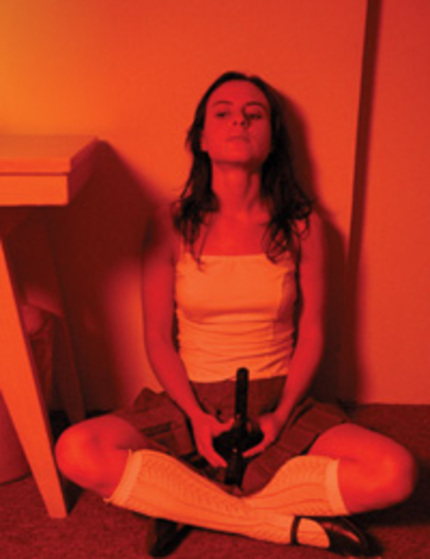 It was only a matter of time when I was going to preview one of the programs created by ScreenAnarchy's lord and master, that lovable rapscallion Todd. Now, I cannot say for sure but I will assume that in each program at any festival you're given a glimpse into the psyche of the programmer. After all what appeals to them or what is deemed suitable for viewing enjoyment by them is in itself also a sign of their tastes and mental fortitude. So when you sit down in a couple weeks to watch the Freaky program as part of the Midnight Mania evenings you will understand what I have known for the past 15 years. Todd is a bit of a freak!

You ever fall in love with a girl and you just cannot stop thinking about her? Did it seem like nothing could get in the way of that crush, that you could not stop staring at her when she was in the room? Would your crush even survive, say, a zombie apocalypse? Aussie director Spencer Susser sure thinks so. I Love Sarah Jane and nothing, not even zombies, is going to stop my love for her.

A trio of animated shorts made it into the roster this year. The Flower is the story of an eternally optimistic daisy and is disturbing at best. I would like to think that Carla Coma took a cue from a Hitchhiker's reference to Mice and Spiders when she created The Squirrel Next Door but I am very likely reaching here. And I for one am a cat person, I know that Todd has three living in his house, so that makes Melty Kitty the feel-good short of the festival for us.

In what I can only describe as experimental cinema meets puke fetish meets cowboy/horror hybrid the most colorful film of the program is most certainly The Rambler. Boasting a vibrant color palette on grainy film stock it is definitely one of the more cryptic of the bunch. But, it does ring patriotic with a lo-fi synth version of 'Oh Canada' in it. Yay! Speaking of Canada, a familiar face from Canadian television Colin Cunningham has his own short Centigrade in this program. To say his short is chilling is rather antonymous but serves as a stark reminder why you shouldn't beat your children. And while on the theme of keeping clear of picking on minors our trip down into Mexico in Fernando Fidel Urdapilleta Jimenez' Pretty Little Thing will have you second guessing your thoughts the next time you drive by a pretty girl in a school uniform. His short really has... bite.

We'll end our tour tonight with a couple shorts busting more of a industrial vibe. Samuel Jørgensen's film Katie's Journey visits the inner world of a child in mourning. A child's own imagination can create events that are more terrible than that which she is mourning. Beware the Tall Man and the Breathing Man. Then proving that you can mash together Horror, Sci-fi and Martial Arts the duo Benni Diez and Marinko Spahic will end your night with Kingz. We've spoken a bit about Kingz here on ScreenAnarchy already and you will be pleased to know that it rewards all anticipation. Kampfansage‘s Mathis Landwehr gets to show off his martial arts skills. I have four words for you. Two. Big. Ass. Knives. At the end of the night remind yourselves this, Kingz was shot as a student thesis film.

Get 'Freaky' and buy your tickets at the official site.