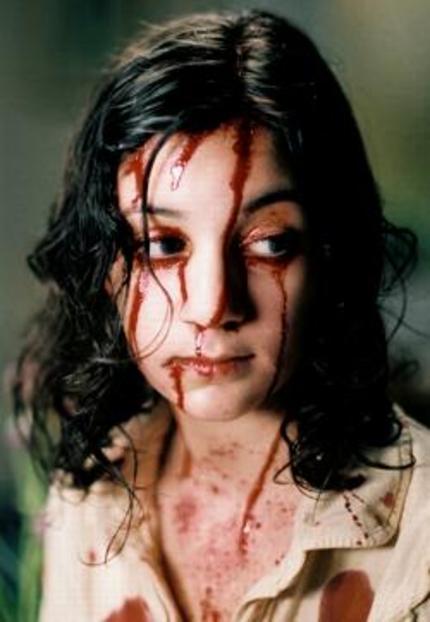 Few things can be harder than making an original vampire movie. The subject has been done to death over and over again yet it keeps rising from its grave, each time more tired and derivative than before.
But people still try and get a unique angle on this, and sometimes they even succeed!

In Tomas Alfredson's "Let the Right One In", the focus is on a 12-year-old boy and his friendship with the similarly aged girl who just moved in next door. Well, that and their love/hate relationship once he discovers she is actually a vampire who is responsible for the recent series of attacks and murders in the city...

Seeing a world premiere is always a risk, because you don't know what you're going to get and even if you have some advanced knowledge, we all know a good trailer can mask a bad movie. In this case the risk paid off though, the whole audience at my press screening had a blast, so a big "Thank You" to everyone who told me to go see this film!
It's a genuine surprise just how delightful a genre-mash this movie is.

Read on after the break...

In 2004 the novel "Låt den Rätte Komma In" by John Ajvide Linqvist was released in Sweden, and was a big success. The book has since been released internationally to rave reviews, and many attempts have been made by Swedish, Danish, German and American companies to buy the movie adaptation rights.

In the end the winners of that particular race were the team-up of local boys Tomas Alfredson (director of "Four Shades of Brown") and author Linqvist himself, who wrote the script.

And lo and behold: they just finished the movie!
Although there have been several press screenings worldwide, the world premiere to a paying public is at this year's IFFR.
Today, in fact (if you read this on the date of the review)!

Oskar is a boy who reads a lot but hasn't got any friends. His nickname is "piggy" and for the school bullies he is the choice object for pestering.

He always fantasizes about taking bloody revenge and is fascinated by news articles about violence, but Oskar is too scared to actually ever do something.

Until he meets Eli, the girl who just moved in next door.
Both social recluses, Eli and Oskar keep bumping into each other on the same playground after dark. And despite their solemn vow not to become friends, guess what...

Things seem fine and Eli even gives Oskar the confidence to fight back against his tormentors. But the neighborhood is shaken up by violent attacks and murders, and Oskar can't help but wonder if there isn't something terribly wrong with his newly acquired girlfriend.

It would be unfair to say one further word before mentioning the stellar acting by the two children who play Oskar and Eli: Kåre Hedebrant and Lina Leandersson. When the two are together sparks fly, it's as simple as that. And with the audience healthily invested in the welfare of these two (who, by their acts, would in other movies easily be the "bad guys") the rest just clicks. Director Tomas Alfredson takes the audience as close to these two as possible and you almost feel part of their team, which is a good thing!

The story doesn't lack punches either, nor does it shy away from darker material. People bleed in this movie, profusely. And Eli doesn't just take "evil" people for dinner but is totally indiscriminate. At one point she even lures her victim by playing a wounded child, a dirty trick if there ever was one. It certainly ups the stakes (no pun intended) for Oskar and makes his friendship with this creature ever more difficult.
Both Linqvist and Alfredson have a background in stand-up comedy, so the goings-on are appropriately infused with some black humor as well.
It's not all sunshine though: there are some plotholes, but nothing bad enough to derail this film.

Production values are pretty good: everything looks believably "eighties", the snowscapes of Sweden look mighty fine and everything is underscored by a suitably moody soundtrack. Maybe it's just me, but after several low-budget movies it was refreshing to be hit by something that was nice and slick.

Also I salute the use of digital effects here. Take notice people, this is how you do it! Every "vampire" effect is done in a very subtle way, so every time you wonder if you really saw what you think you saw. The tweaking of the size and shape of Eli's eyes is marvelous, but the money shots are decent too.

I love this movie, period.

One of the best I've seen this festival, only time will tell if I will hold it in as high a regard as, say, "Pan's Labyrinth". But I'm sure both Guillermo del Toro and Terry Gilliam would have a blast with this movie and that is the best praise I can imagine at the moment.

And my countdown for an English-subbed DVD (the movie is in Swedish) starts...NOW!

More about Let the Right One In