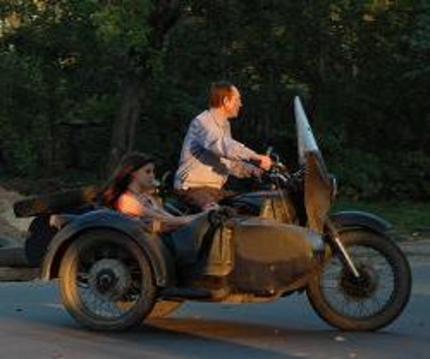 The first film I'll be reviewing this festival was chosen because it was recommended by Ghibliworld's Peter van der Lugt. He saw it in Venice and today urged me to watch and review it for this site, as it was "typically ScreenAnarchy!".
Hopefully Peter is wrong, because if he isn't we might have a small reputation problem on our hands...

Getting the tickets on such short notice wasn't easy, even with a press card: the film was heavily sold out. "Surprisingly!" I might add because this is without a doubt one of the bleakest pictures I've ever seen. The only thing that makes it watchable is the jet-black humor and, well, seeing things rot has its own peculiar entertainment value.

Balabanov meant this film to be the harshest possible condemnation of early 1980's USSR and wants it to give people who longingly talk about the 'good old days of communism' a good kicking.
In the teeth.
Hard.

Storywise it's difficult to explain what's happening without spoiling too much. Suffice to say that after a disco party in 1984 some people get WAY too drunk and a girl ends up missing. She's the daughter of a communist party bigwig, so mayhem ensues. What happens next keeps you second-guessing your expectations, starting with who exactly is the protagonist of this story, or how do all these people relate to each other.

Like Korea's "The Host" this film milks the missing girl angle for all it's worth to try and show how completely rotten everything and everyone is. The case which needs to be solved here is not particularly difficult, but a quick happy end is prevented by corruption, cowardice and a total lack of any empathy in all people involved. This last fact is the most damning of all and the hardest to watch. No one cares about the fate of one particular victim (including the director, it seems). Not a pretty picture.

Another thing which isn't pretty is the background. Most of the story takes place in the industrial town of Leninsk, and it is a cesspool of decay and rot. All buildings are filthy, cracked, sagging, leaking, and covered in layers of peeling paint. A sight to behold!
Even the so-called "powerful" live miserable lives here, and for all their 'might' are not able to get any momentum going. It is not so much the problem that something is wrong, it's that NOTHING is RIGHT! It's clear what the director's view is: the communist ideals in the USSR are like a naked, scared girl in a room full of rotting corpses.

Speaking of corpses and nudity, this movie isn't too gory but it sure as hell is vile.

Alexei Balabanov is known for being very critical of the old communist regime, but "Gruz 200" is so vicious that many of his longtime collaborators refused to take part in it. The unknowns which are now on display here are all playing their roles in a very natural way, giving an almost documentary feeling. At times you might think that you're actually in a room with these people, only you'll be glad you're not!

The movie starts with the statement that it's based on a true story. You can only hope for the sake of everyone involved that Alexei Balabanov is exaggerating. Which might be true: for one thing an incredible double-coincidence occurs during the movie, concerning the titular Cargo 200, which might take you out of the 'realism spell' the movie has been weaving up to that point. But after that point the relentless abuse actually starts to work in favor of the movie, allowing the director to go over the top in such a way that nervous laughter alleviates the tension a bit.


Conclusion:
Re-reading this article I might have given the impression that I didn't have a good time. That would be too harsh, but the fact is this was not the easiest film to watch. Thankfully Alexei Balabanov keeps the film interesting and thrilling enough, especially when the kidnap gets underway.
So it's recommended, but not for the squeemish!

IFFR's page on Gruz 200.
And I mentioned Peter and his excellent site Ghibliworld.