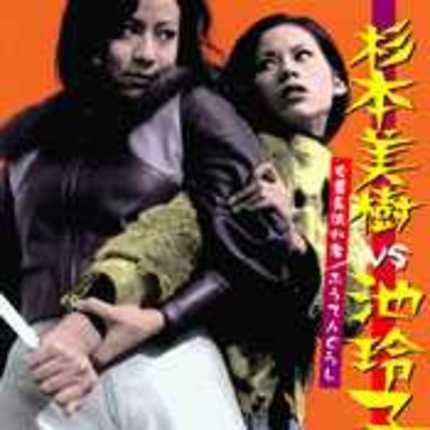 With another 'Delinquent Girl Boss' film coming along just a couple of weeks before this ('Blossoming Night Dreams' on January 29th 2008), it would seem to be that Media Blasters 'Exploitation Digital' sub-label has their hands on the remaining films from the series outside of the one cherry-picked by Panik House for their original box set of 'The Pinky Violence Collection', as this is Norifumi Suzuki's 'Sukeban' under a different title, his early 1973 film which follows Panik House's also-selected title 'Sukeban Guerilla' from the previous year. Still have to hope these discs are decent, still likely to just pre-order them, but I'll repeat that I'm not at all impressed by the first 'Rica' disc and so haven't gone anywhere near the following two.

Here's a synopsis from TLA Video, "A car, loaded with delinquent girls, is headed to reform school when it crashes and the girls escape to freedom. On the run from the law, girl boss Komasa and her friends seek refuge right in the middle of Osaka's hardcore gang territory. Rival gangs battle it out for supremacy in a corrupt world of money-hungry degenerates whose only objectives are to make a quick buck and score a quick score. When Komasa and her pals get involved, it throws the whole underworld into chaos and they soon find themselves at the mercy of some sinister thugs. Abused to no end at the hands of some rough customers, the girls find themselves the currency in a brutal transaction. But girl boss Komasa won't consider any debts paid in full until she has her revenge!".

Media Blasters have been a little loose with their lips on other upcoming licensed projects, with a mention for the 'Lone Wolf and Cub' TV Series, plus a vague (but comparatively specific) mention on Miike's 'Zebraman' (2004) as finally coming somewhere around February or March time next year; Amazon.com confirms it as February 19th 2008.

If anyone wonders about the state of play on these 'Pinky Violence' films from my perspective - well, the one's specifically labeled and sold as such, not the ones out there that fit the bill but are fairly under the radar as far as the slightly bigger, popular reaction that the Synapse / Panik House ones are getting - I would say that 'Horrors of Malformed Men' (by Teruo Ishii) is the greatest achievement in rescuing a film, though I wouldn't have put it in the genre at all... 'Female Demon Ohyaku' is the nicest and most interesting of the recent slew as it seems to confirm and explain the teen take on Jidaigeki or Chambara movies... Nobuo Nakagawa's 'Snake Woman's Curse' has the ghostly faces but little else evident of Criterion title 'Jigoku', and 'Okatsu the Fugitive' has the lovely sound stage sequences of that film too, along with a better overall execution than the second film of the loose trilogy, with 'Quick-Draw Okatsu' being fairly flat apart from the wonderfully colorful clothing worn by the women.

Still, all these and many more are a given in a relatively starved (but almost established as solidly as any sub-genre) market for Japanese movies of the 1970's exploitation type, but we could do with some much wilder and less familiar (or generic, if there's such a thing) stories to tempt us in further, because I fear familiarity might unavoidably come in far sooner than many companies would like if there's not a continual evolution to be had, or at least some fresher entertainment within them. Lots of Norifumi Suzuki appearing in Japan unsubbed at the moment too.