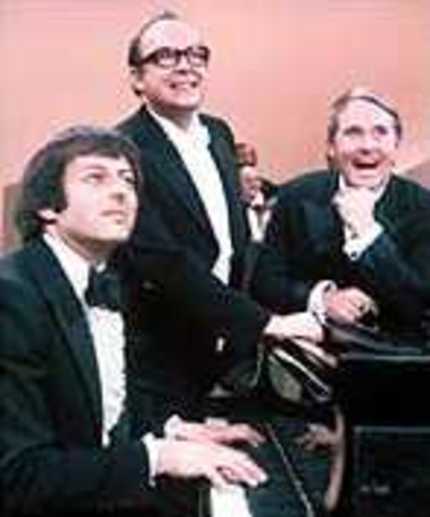 The joys of Christmas are almost upon us once again. At least, if you step into any large department store in London from June 1st onwards, and you'll find the decorations are on sale already. Usually this translates to the old discussion of Christmas coming around all too soon once again and it's usually portrayed as a national issue (which is not exactly discouraging the opinion), rather than because tourists from across the globe are here in their largest numbers at that time, and it's not for our benefit that these things happen. Christmas is, was, and will always hopefully be, about sitting in front of the TV and having a good laugh...

In more innocent times, as the saying goes, when TV here consisted almost literally of several channels, when variety, easy-going and relatively non-political comedy was still commonplace, seaside sauce and war-time escapism were still habits and pleasures firmly in our minds, Christmas was a time the family gathered to argue in front of a nice special episode of the major comedy figures of the time. Yes, after the Queen's Speech at around 3pm, after some golden religious epic film, or following the latest blockbuster that either BBC or ITV had forked out for, we often found time for the odd double-act who dominated a good couple of decades worth of prime time slots. Still fondly remembered, the two mainstays of Xmas special viewing are The Two Ronnies and Morecambe & Wise (later giving way to uber sitcom 'Only Fools and Horses' as the major events) and for those that remember these times or those brave enough to want a taste of something relatively lavish, something for the family, something from the upper levels of British Comedy acting and writing, there's plenty to be had in two sets of these shows coming soon, and they don't tend to get shown that often in complete form these days... there's also some classics which get dug-up at this time and repeated in graveyard slots.

And, as Christmas is a time when the British need cheering up more than most other times of the year, remember that there's a good couple of decades of habitual releases from popular comedy figures trying to cash in on peoples desire to miss out on all those film repeats and various other time fillers before the special new shows appear in the schedules, so peruse the latest from those you're familiar with, or take an unusual tip or three from me...