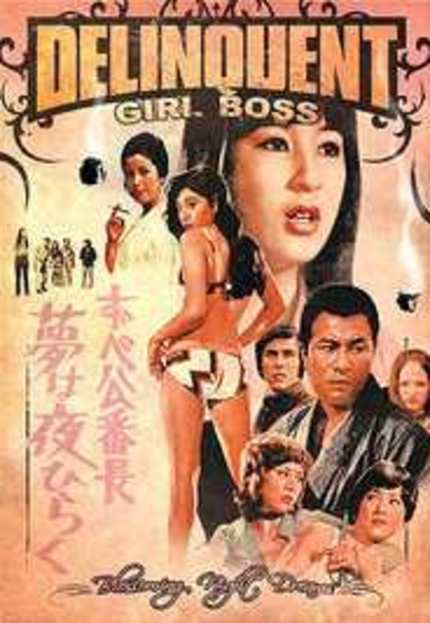 Media Blasters, their Exploitation Digital sub-label, seem particularly keen on Pinky Violence films right now. Ongoing at the moment, their 'Rica' trilogy is going down well for it's content - though I've not really picked up on what I sensed when trying out the first of the three, that the mastering is probably the worst I've seen on any DVD anywhere - and many are already happily declaring their interest in a further venture into the 'Delinquent Girl Boss' series which Panik House picked 'Worthless to Confess' out for their Pinky Violence Collection set.

Back then, as is remembered by some, Panik House said they weren't releasing a series - as these films often run for more than a few sequels if they went down well in Japan originally - but instead picking out their favourites from a slew of series. Now that the opportunity to catch more seemed to have passed us by, in come Media Blasters to pick up the torch, with what I seem to be able to discover was the first, known originally as 'Yume Wa Yoru Hirakua' (the previous film being the fourth - there may be a fifth also) and this does suggest to some we'll see the gaps filled here.

Who knows for certain? Well, they do, we don't, but we'll hope to find out in time. Let's hope - and I'm holding off on this one until I sense how it turned out - that the disc is a decent job and that the opportunity isn't wasted, as 'Rica' looked like one of those really heavily compressed files that could have come from some Japan-only DTO scheme as some studios have seemed to supply material for... plenty of similar stuff is starting to appear on DVD in Japan, so there could be new masters being done for that market which MB can dip into.

Synopsis from TLA Video, "After a life in reform school, Rika (Reiko Oshida) tries her hand at becoming a decent, upstanding citizen. But try as she might, she just can't get the hang of the straight life. She finds herself back in the big city where the hippie revolution has taken hold and psychedelics are the drugs of choice. Back on the streets, she meets up with her old reform schoolmates and becomes embroiled in an underworld full of gangsters and shifty kidnappers who have a taste for money and women. Now, Rika must rely on her two greatest assets — her beauty and her butt-kicking skills — to help her friends take brutal revenge!"