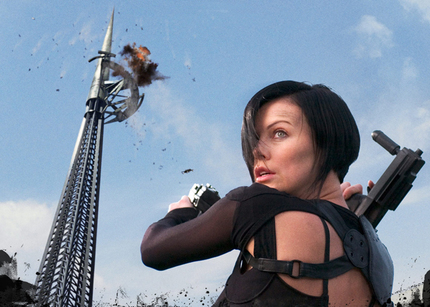 [Since I am an unabashed fan of Peter Chung's original MTV incarnation of Aeon Flux, the below review inevitably keeps coming back to the TV show For better or worse, there is little attempt to assess the film completely as a stand-alone vehicle. Note, there may be a mild *SPOILER* or two in there as well.]

"It looks like nature found a way." -- One of two likely unintentional Spielberg references in Aeon Flux, puts the film nicely in the sphere of the biological-minded science fiction. The novel cyberpunk aspect, biotech gone wild, is rather nicely ported over from the Peter Chung's anarchic animated TV series. Scissor-like flesh-seeking blades of grass and fruit-on-the-vine capable of firing poison loaded darts at both a high rate and velocity offer interesting visual thrills and botanical challenge for Aeon as she tries to infultrate the sprawling lair of her arch-nemesis Trevor Goodchild. Accompanied by fellow state-terrorist (a welcome Sophie Okonedo) who was forward thinking to have her feet surgically replaced with hands for an acrobatic edge, they dance and dive their way through the most unique corporate greenscape ever committed to celluloid.

In the 10 episode TV series, there was never an attempt at narrative continuity either within a show or across the series. Each episode more or less had Aeon attempting to thwart one scheme or another of Bregnan scientist-dictator Trevor Goodchild, but at the same time dealing with her lust for him. The film does have the feel of an extended episode with the concession to mainstream multiplexes being a story is structured in a far more straightforward manner, somewhat amplified in stakes.

Elaborate, vaguely Eurasian architecture and costume design give you a very interesting world to look at. It was a smart move to set the film away from the Orwellian model of dark and dreary dystopia, even if the visual palette occasionally treads into Star Trek: The Next Generation territory. Aeon and her fellow feminine rebels-against-the-man, lead by fiery-haired and ghostly Frances MacDormand, do not need to meet in clandestine back alleys or bunkers, but rather take a pill and meet their leader in some sort of pharmacological state of being. Phones are implanted directly into the ear, video-email can be sent by spores in a glass of water. Production design reigns supreme.

Bregna, the last civilized outpost of any kind left on a post-industrial planet earth, is a police state walled in from the dangers of the rest of the world - a flirting comment on US domestic policy scaled out to a far flung future. But it is not the war on terror, rather the poison terrarium that is the rest of the planet. It seems 400 years prior, the rest of the planets population succumbed to a vague 21st century pollution-disease (an echo of Todd Haynes' Safe) that was later cured by a distant ancestor of the current Chairman. Despite seemingly unlimited biotechnology, fear of disease prevents citizens from venturing out into the wild greenery beyond Bregna's walls. The population is suffering strange dreams and vast number people are disappearing, both harbingers of a strained society ready for revolution and change. It comes in the form of a domestic terrorist movement, known as the Monicans (of which Aeon is a key member).

Aeon is first given a mission to destroy the massive Minority Report like liquid surveillance system and afterwards, extended orders to assassinate fearless-leader, Chairman Goodchild. There are sexual wrinkles at play. The kill/kiss dynamic between Aeon and Trevor from the show is muted, insofar as Marton Csokas' rendering of Goodchild is neither menacing nor diabolical; merely aloof. Despite visual comparisons to Chairman Mao via beautiful propaganda billboards scattered around the city-scape (and a dizzying metallic-Worholian collage in his own secret laboratory) there is a lack of villainy in Trevor. This is a mostly result of the screenwriters inexplicable choice to divide his character from the TV series into two. Co-Chair of Bregna is Trevor's treacherous brother Oren (played by Johnny Lee 'Sickboy' Miller of Trainspotting or Hackers' Zero-Cool, if you prefer). Oren is evil and not really that interesting outside of his delusional conservativism of the Bregnan way of life. It begs the question, when adapting a idiosyncratic property, Why the split the original character into two discrete ones? The result is both being diluted, convoluted and frankly, unnecessary.

Where Aeon Flux really suffers is in the loss of curiously whimsical levels of carnage omni-present in the in the original wordless Liquid Television shorts. Oh, there is nothing wrong with Charlize Theron's appearance, even if it is a fair bit toned down from the original dominatrix outfit. What is missing is the joy of her simply being Aeon Flux - ecstasy from being good at what she does and a haughty superiority of being 'above it all.' This was the cornerstone of the series, which often ended episodes with her lust for Trevor bringing her back down to the filth and imperfection of humanity.

Screenwriters Phil Hay and Matt Manfredi have given a reason for her isolated toughness, a sister which from the outset you know is doomed, but you would think director Karyn Kusama would have given said sister more than two minutes screen time. This is one sign of directorial clumsiness otherwise absent in a handsomely mounted female affair. The TV show made her over-confident and playfully punished that attitude by killing her as often as letting her live, here she is much more hesitant and uncertain, but nearly always successful. I just prefer the former. Another misstep is in the editing the fight sequences like Mark Steven Johnson's inept Daredevil, too many cuts undermining the grace of movement. With no shortage of imported Asian stunt choreographers, from Donnie Yen to Siu-Tung Ching to Woo-ping Yuen, doing work in a variety of Hollywood films, Aeon deserved better, it flirts with clarity, but always undercuts the motion with cuts.

Ultimately though, Aeon Flux aims to move past the comic-book action film which is the basis of the main value proposition of the film. Nicely, it favours science fiction concepts; shades of The Matrix, which no doubt was in large part inspired by the original Aeon Flux animated episodes. Things are quite successful in this department, although to further elaborate on some of the details would be heading full on into spoiler territory. The film is certainly not the disaster that the lack of press-screenings (and subsequent press reaction because of those lack of screenings) implies. I would bet a few dollars that if the film was not an expensive would-be franchise, prominently featuring two Oscar winning actress, or if it was buried in the way that Peter Jackson's The Frighteners or Kurt Wimmer's Equilibrium, it would achieve 'overlooked' status in a few years. Instead, by virtue of Oscar winners following up with tentpole blockbusters, it is inextricably linked to bonafide distaster Catwoman, which seems a tad undeserved. The overall package is entertaining and of a novel eye for visuals. It also provided fans of the original show with a top shelf DVD release. To that I say, thank-you, Paramount.

For completeness sake, other than Jurassic Park, what was the other unlikely Spielberg reference? Well, for one Aeon Flux more than once stretches the level of brutality of the PG-13 rating, favouring the bloody and the fleshy in a time when these elements are surgically excised from most action films. Where Temple of Doom (the film that stretched the PG rating to the breaking point and all-but created the PG-13 rating) had villain Mola Ram reach his hand physically into a body to remove a still beating heart, Ms. Flux plunges a digit or two into the wounds Trevor Goodchild in an attempt to remove a few bullet. The scene carries sexual undertone very much in keeping with the spirit of Aeon Flux. The film version needed more of this. Lots more of this.

Do you feel this content is inappropriate or infringes upon your rights? Click here to report it, or see our DMCA policy.
Aeon FluxCharlize TheronKaryn KusamaPeter Chung