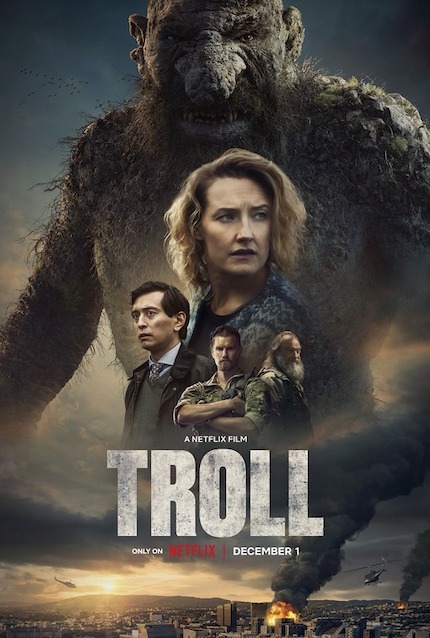 My, what big feet you have!

Troll
The film is now streaming worldwide on Netflix.

Writers Roar Uthuag and Espen Aukan conjure up a modern-day fairy-tale about a giant monster who wakes up one day. And, oh my, is he hungry!

As a director, Roar Uthuag brought new life and vitality to a frozen thriller (Cold Prey, 2006), a disaster movie (The Wave, 2015), and a Hollywood action-adventure (Tomb Raider, 2018), among other accomplishments in his filmmaking career. His latest film, Troll, returns to Norway to update a fairy-tale that is related in the opening scene, involving a young girl named Nora and her beloved father, Tobias Tidemann (Gard B. Eidsvold).

Years later, Nora has grown up to become Professor Tidemann (Ine Marie Wilmann), a paleontologist doggedly digging for dinosaur bones when she is called to Oslo and ushered into a top-secret meeting with Prime Minister Berit Moberg (Anneke von der Lippe) and her top advisors. They are deciding how to respond to a disastrous event on a mountain which was mined to clear room for building a new railway line, which has awakened a mysterious creature of gigantic size.

Nora teams with the geeky Andreas (Kim Falck) and military leader Captain Kris (Mads Sjøgård Pettersen) to make an initial investigation into the field. Bonding quickly, it's no wonder that they stick together as the true nature of the mysterious, giant creature is discovered. Of course, we already know what it is -- see the title, above -- and soon the question becomes: how can it be stopped?

Director Roar Uthuag does not rush into the action, though he moves at a good pace in order to create a foundation for Nora and her view of things. She is a scientist with a grounding in folklore, which means she represents and understands both perspectives, which makes her character believably integral to the plot.

Ine Marie Wilmann brings great conviction to her role, manifesting as an empathetic woman who is smarter and bolder than everyone else. Everything she does is completely convincing and logical. She is a hero for our times.

If you've seen past films by Roar Uthuag, then you're already familiar with his method of borrowing Hollywood blockbuster-movie tropes and making them thoroughly Norwegian, reflecting the country's culture and tradition. All of that means is that the movie feels faintly familiar, while refreshingly different, featuring new wrinkles that are well-considered and profoundly satisfying.