Review: NOCEBO, Revenge of the Exploited 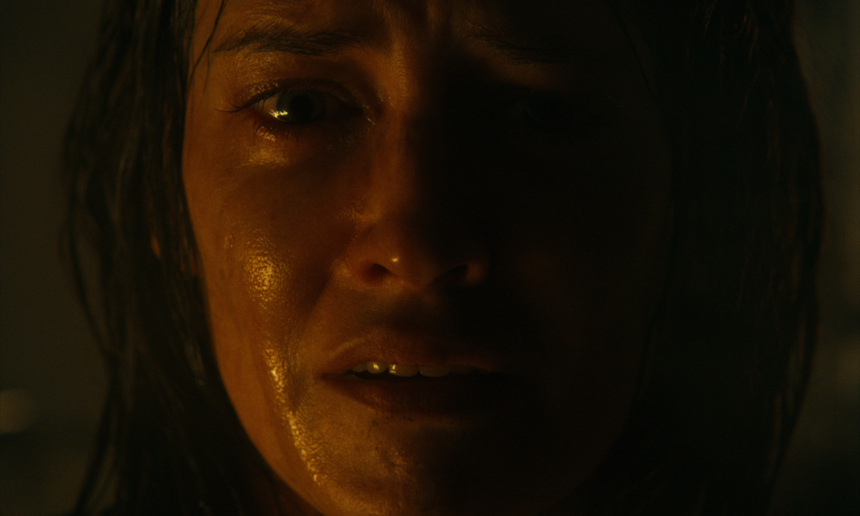 I've always found the expression 'it's all in your head' to be a bit odd; well, yes, things are in our head, as that's where we process the information that we're given by our senses and our experience in the world. Just because it's all in our heads, doesn't mean it isn't happening or it isn't real.

Such is the case with Lorcan Finnegan's new film, Nocebo. What exactly is happening is slow to reveal (though perhaps not as slow to be figured out), but it definitely wants us to question how our emotional state can affect our physical health, and just how much guilt we can bear - and really, what we should take responsibility for, when we are the cause of other's grief and pain.

Christine (Eva Green) is a succesful high-end children's fashion designer, who one day gets some terrible news. Flashforward several months later, and she's suffering from a mysterious illness with mixed symptoms that elude doctors and frustrate her husband Felix (Mark Strong) and daughters Bobs (Billie Gadsdon). One day, Diana (Chai Fonacier), a woman from the Philippines, shows up at their door, claiming that Christine hired her as their new live-in housekeeper. And while she proves excellent at that job, it seems she also has a plan for 'healing' Christine.

The exploitation of household workers, particular ones of colour in white homes, lends itself to a subtle insidiousness. Finnegan shows well how the family acts friendly and welcoming on one hand, but will test their help with microaggressions (the poor are never to be trusted), and suddenly set boundaries with the other, boundaries that make little sense to anyone but them. But it's not surprising that a woman such as Christine would develop an attachment to her servant Diana, someone who seems to embody everything that Christine needs in her life - a cook, a maid, a confidente. She thoughtlessly set asides her social and racial privilege as she wants, something Diana can never do.

But Diana is more than aware of this, and (quite rightly) exploits her employer's sense of privilege that leaves her blind to what's really going on. Fonacier is magnetic as Diana - her stature belies her power, and she knows all too well how rich, white, westerners like Felix and Christine see her and others like her. As long as it's just food and gentle spiritual rituals they impart, it's fine - but they have no trouble proverbially (or literally) working them to death. Diana knows what is causing Christine's mysterious illness - coming from her head, indeed, but with a very real source - and Diana's cure takes an unusual form.

Finnegan and screenwriter Garret Shanley, who worked together on Vivarium, once again make uncanny the domestic space. This time, by forcing people like Christine and Felix to acknowledge that they have that domestic space because of people like Diana and the labour that is forced from them. Even if it's pretty easy to know why Diana is targetting Christine, she still has secrets and tricks up her proverbial sleeve; she will only harm those that deserve it, and seek revenge with those in kind to the horror they have wrought.

Nocebo definitely gets quite dark, as it depicts events that have happened in the past, for the same reasons they happen here: the selfishness and lack of empathy of those with power and privilege. That privilege and its attitudes are turned against those were abuse this power, with devastating yet satisfying results.

Full disclosure: Founder and editor Todd Brown works with XYZ Films; Nocebo is an XYZ Films project; Todd was not involved in the writing or editing of the review.

Do you feel this content is inappropriate or infringes upon your rights? Click here to report it, or see our DMCA policy.
Lorcan FinneganGarret ShanleyEva GreenMark StrongChai FonacierThriller