Nate Boyer, who also directed, and Will Phillips star in a stirring drama, inspired by real-life events. 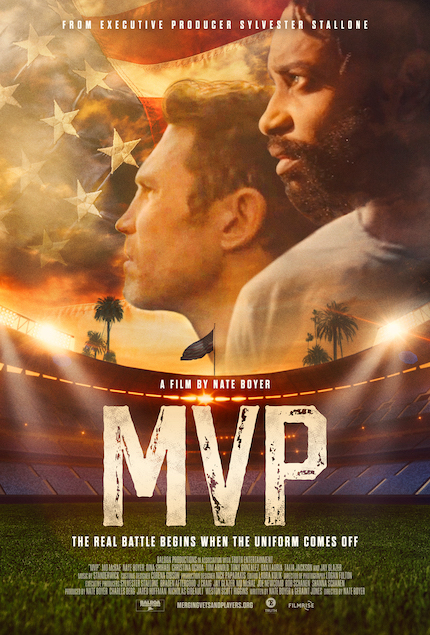 One served in a field of military battle. The other served on a playing field. What brings them together?

From outward appearances, military veteran Zephyr (Nate Boyer) has it all together and professional football player Mo McRae (Will Phillips) does not.

Zephyr has settled into convivial living quarters with other military veterans in Los Angeles, who banter in a rough but playful manner every day. He works as a security guard in a wealthy neighborhood, which is far too boring and quiet for him, but at least brings in a steady income. He remains politely guarded in his dealings with the homeowners and other civilians; he trusts no one.

After a successful playing career that brought him notoriety and wealth, Mo McRae finds himself unemployable. He yearns to play, but he can't find a job in the NFL and is ill-suited for a broadcasting career, as he discovers in a disastrous audition opposite Tom Arnold. He is at loose ends, and is making his wife and others in his personal circuit terribly unhappy because all he does is mope around each day.

Early in the film, Mo and Zephyr have a serious misunderstanding that leads to conflict: Mo wants to help Zephyr in the only way he knows how, and Zephyr rejects his transparent attempts to salve his own guilty conscience. They work things out and start doing some things together, revolving around something that Mo establishes to try and help military veterans, but their own personal histories keep getting in the way.

Based on a true story, MVP is awash in earnestness that is genuinely earned. Boyer, himself a military veteran who wrote the film with Geraint Jones, does not depict himself as a hero, but as a flawed human being who is dealing with Post-Traumatic Stress Disorder and all its attendant challenges. He may not call himself a hero, though certainly many of his actions can be described as heroic.

McRae brings empathy to his troubled character, without an excessive amount of self-pity. He is dealing with loss on his own terms; it's not loss in a material sense, necessarily; what affects him more than that is the idea that he's lost his sense of self-worth, which was tied up in doing work that he loved and still wanted to do.

Empathetic and balanced, Nate Boyer makes the connection between military veterans and retired professional athletes crystal clear. I've never been either, but I could empathize with the obstacles they face and their individual resolution to overcome them, and help others in similar circumstances to do the same.