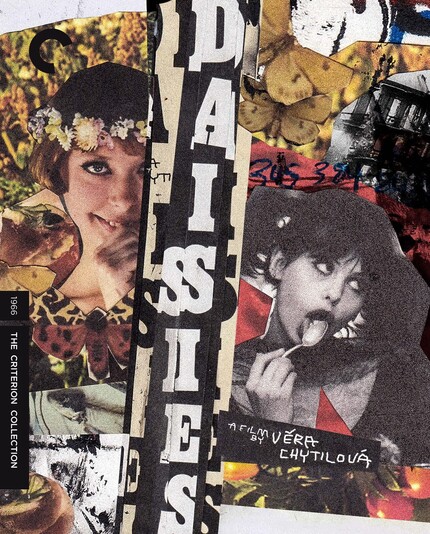 While there might be filmmakers who more readily come to the minds of cinephiles when you mention Czech New Wave cinema of the 1960s, I'd argue that there is no more important film of that era than Daisies. Věra Chytilová's groundbreaking film is at once a art collage, a philosophical rant, an experiment in form, and a tale of two women on the cusp of the sexual revolution. Deceptively complex and intelligent, deeply humourous, often dark and brimming with energy, it defies both expectations and easy categorization. Even more than 50 years after its creation, it remains fresh, relevant, and unequaled.

Marie I (Jitka Cerhová) and Marie II (Ivana Karbanová) are two seemingly ordinary yound women who randomly decide one day to be bad. Well, bad might be a relative term; what they do is take advantage of how the world sees them and their place as working class women, and throw off responsibility. They let men take them to dinners and clubs, offering nothing in return except that brief time in their company, thoroughly engaging in the frivolities of indulgence. They lounge in their apartment, frolic in the countryside, invade and devour a banquet, until it all comes (literally) crashing down around them.

The film begins and ends with images and sounds of bombs and war; not exactly what one would expect from a film about two girls being bad, but there was a war of culture, of ideology, of politics in this era in Czechoslovakia, and for Chytilová and co-writer Ester Krumbachová, what better way to express the war in which women were caught? They seem to behave as marionettes, sound effects emphasizing this, and yet is this not how women are expected to behave? Being 'bad' is simply about accepting the role that society has forced on them, and the Marias take full advantage of this. This is satire at its most cunning - one that deceives those who secretly believe the stereotype, presenting it as both tangible and absurd.

With the mix of media, Daisies plays as much as video art as it does as film (it certainly could never be mistaken for a narrative story), as Chytilová employs all manner of methods to weave this collage - different colour grading and film stocks, discordant sound effects, strange costumes, genre semantics from comedy to drama to action. Nothing is sacred and everything is allowed, if the Marias are to truly explore what it means to resist tyranny via abandonment of responsibility.

Resisting tyranny is hard work to make one hungry and thirsty, and not just for food and drink. Daisies offers its characters, and the viewed, the opportunity of resistance via thwarted and embraced expectations, and Chytilová's unique engagment with the medium of film in all its variety. 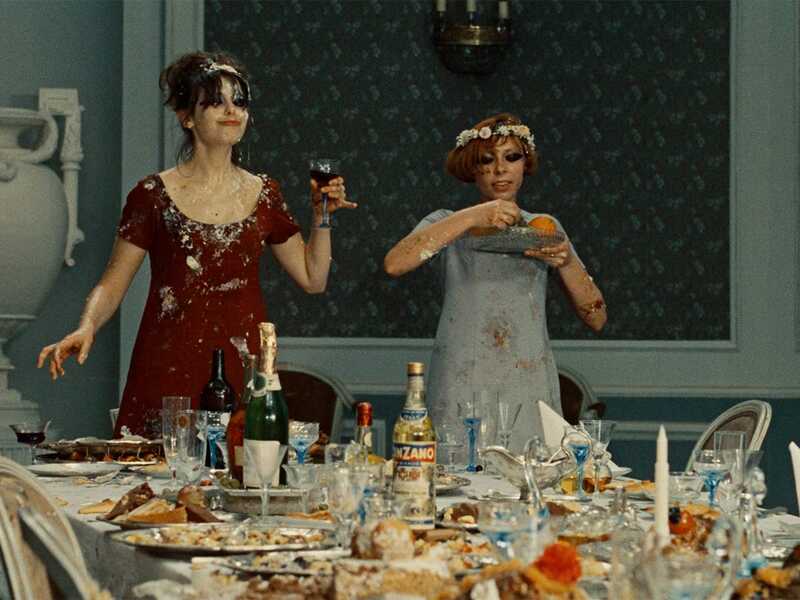 The new 4K digital restoration does exactly what it should: makes you feel like you're watching the print for the first time. The colours pop, the black and white scenes feel rich in light and shadow. The uncompressed monaural soundtrack lets all the strange sounds come through crisp and clear. The audio commentary from film scholars Peter Hames and Daniel Bird is informative; for example, I did not realize that neither Cerhová nor Karbanová were professional actors (but it might have been nice if one of the commentators was a woman).

A new interview with programmer Irena Kovarova is a nice intro to Chytilová for those who might not know her or the importance of Daisies, its place in both Czech and women's cinema (though Chytilová eschewed the label of 'feminist' for understandable reasons, she just wanted to be known as a filmmaker). The 2002 documentary is a wonderful archival piece, with Chytilová herself talking about her passion for film, why it became the medium she worked in, and how and where she found inspiration. It's intimate and inspiring to see how giddy she is just to hold a camera, to learn how she made film a part of her everyday life with her family (and to see photos of her directing while very pregnant). She talks of the pressure on women to be 'perfect' mothers and how she know she could never live up to the standard; and yet, she likely was a great mother, just as she was a great filmmaker. Hers was a life of rebellion and resistance.

Equally, the second documentary, about her collaboration with cinematographer (and her first husband) Joroslav Kuċera, and screenwriter Krumbachová, shows how not only is film as an art a collaborative effort, but how especially in these years of communism and oppression, this kind of collaboration was part of that rebellion and resistance. Carmen Grat's essay provides a detailed analysis of the film's themes and symbolism, helpful to those who might need a bit more history to understand much of the context of the film.

Two of Chytilová's shorts, made a few years before this feature, A Bagful of Fleas and Ceiling, provide insight into how she and her team got to Daisies. One could argue that they are the two roots from which the feature emerged. A Bagful of Fleas is a cinema vérité style story, but featuring women trying to work and exist as themselves in a world which will not let them. Ceiling shows the use and abuse of a fashion model. One can see how the characters from that could be the Marias, who in Daisies, rebel against the treatment they experienced in the shorts.