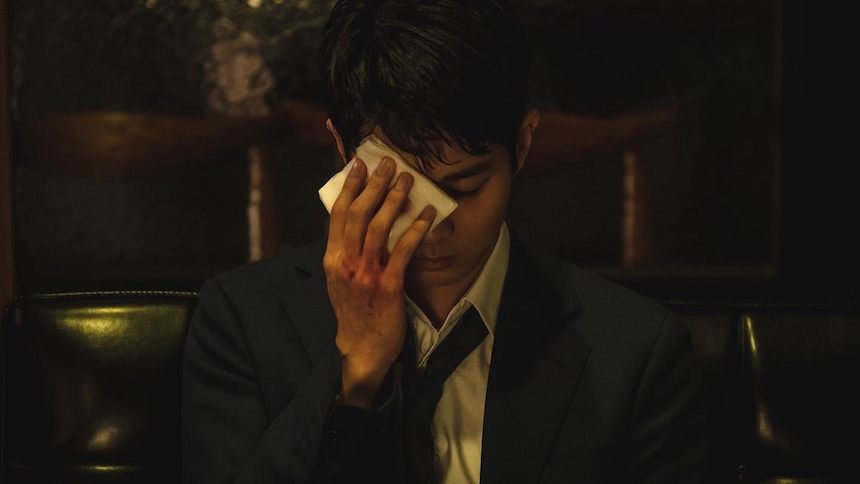 When you've been deprived of something for an extended period of time, anything that comes close to the real McCoy starts to look a little better than it did before.

That may well apply to The Policeman's Lineage, director Lee Kyu-maan's new thriller starring Cho Jin-woong (Believer) and Choi Woo-shik (Parasite), which delivers plenty of reliable thrills in a slick package, but eventually runs into trouble when its familiar elements begin to tangle themselves in a messy final reel.

Given the overall paucity of new Korean releases we've had ever since the beginning of the pandemic (countless completed films are still waiting in the wings for local market conditions to improve), we've been treated to precious few Korean thrillers over the past few years.

That old reliable which delivers a sharp dose of blood, rain and soju, comfort food for genre fans the world over, Korean thrillers have a knack for hitting the spot, even on an off day.

The Policeman's Lineage scratches that itch straight away, with a nighttime opening scene drenched in rain, in which a serious looking pack of men scuttle around a bloodied corpse.

The body belongs to a fallen police officer and among the men gathered around are Internal Affairs investigator Hwang In-ho, played by Park Hee-soon. In-ho is looking to take down Park Kang-yoon (Cho Jin-woong), head of the Metropolitan Investigation Unit, who he believes is a dirty cop.

In-ho recruits the idealistic young cop Choi Min-jae (Choi Woo-shik), who has just tattled on his partner for beating information out of a criminal, to join Kang-yoon's team as a mole. Min-jae is reluctant to go down this path, but In-ho reminds him of the untimely death of his father, also a cop, and asks him why he joined the force.

Min-jae joins the team and after a little hazing quickly settles in as Kang-yoon's right hand, shuttling him between his sleek apartment and meetings with dodgy loan sharks in an imported sedan. Kang-yoon and his team benefit from special 'sponsorship' from top brass, but Min-jae's job is to figure out if their lavish spending has other, more illicit roots.

Min-jae is focused on the task at hand, quickly gathering intel and sending in reports, but when Kang-yoon, who takes a shine to him, impresses him with his commitment to justice, his loyalties begin to shift.

The substitute father-son relationship that develops between Min-jae and Kang-yoon is an enjoyable one to follow, especially as we tag along with them into neon crime dens peopled with colorful thugs and kingpins.

But after following this familiar path for a while, the film suffers as it tries to find the meaning in its story. As indicated by the title (a somewhat clunky translation of the local one -- 'Blood of a Policeman'), the film explores the family ties that brought Min-jae into the force.

Alas, the most interesting thing about this is seeing terrific indie actor-director Park Jung-bum (Alive) pop up as Min-jae's father. But it's all downhill from there. Whatever point the film is trying to make about heritage and following in a father's footsteps is lost in a series of bluffs and double-crosses which strain credulity.

This is all very familiar territory for Cho, whose character fits somewhere between his stoic protagonist in Believer and his oily villain in A Hard Day, but given that these flinty cops are the actor's forte, his presence can be chalked up as one of the film's strengths.

For his part, Choi delivers a gutsy performance as Min-jae, but he's short-changed by a script that doesn't give his character a clear trajectory.

In what may be a sign of the times, the ace sallow-cheeked actor Park is frittered away in a thankless role as In-ho. Park, until very recently almost exclusively a film actor, is now getting much more attractive roles in small-screen thrillers like Kim Jee-woon's Dr. Brain and Netflix's My Name.

Do you feel this content is inappropriate or infringes upon your rights? Click here to report it, or see our DMCA policy.
Cho Jin-woongChoi Woo-shikLee Kyu-maan경관의 피이규만조진웅최우식