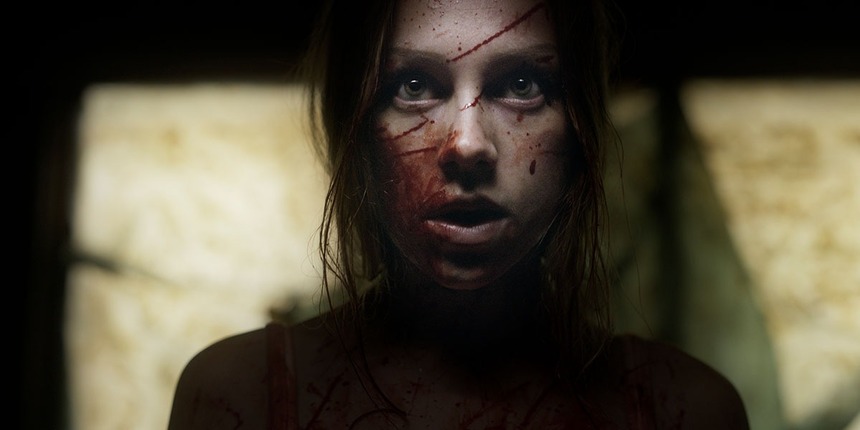 Don't you hate it when you're trying to pull off the perfect crime under the noses of a local drug lord and you end up having to confront supernatural forces bent on subjugating the earth instead, all the while trying to protect a niece that you hardly know because your sister has disappeared? Yeah, me too.

Spanish filmmaker Jaume Balagueró has entertained and horrified us in many ways - from his zombie franchise [REC] (with co-director Paco Plaza), to the haunted house in Darkness, to the psychological thriller in Sleep Tight. In his latest feature, he seamlessly combines two apparently disparate genres into a whole that is quite a wild and bloody ride. Venus starts with a bang and rarely lets us and takes its audience through some impressive twists and some very dark laughs and screams.

Lucía (Ester Expósito) works as a dancer in a nightclub; but it seems she has other plans for her future. She gets caught when trying to sneak out one night with some very valuable goods, injuring one of her boss's goons. She hides out in the only place she can think of: her sister's apartment in the Madrid suburbs. She and Rocío (Ángela Cremonte) have barely spoken in years, and Lucía doesn't really know her young niece Alba (Inés Fernández). But something is happening in this apartment, something that Lucía did not bring with her, something that will require her to step up, as it were, to save her family and herself.

Some information at the opening of film gives us a somewhat deceptive hint (quite a big one, cosmically speaking) of what's happening. Lucía finds other hints around the apartment: a box with what Alba calls tribute to her, from some monster that lurks in the ceiling and is now haunting Lucía. A group of older women seem to be the only current residents, along with one other little girl, and Lucía is smart enough to realize this may be more than she can handle.

Lucía is trapped; first by the gang who she knows is tracking her down and her lack of means of escape from them, then by her sister's seeming abandonment of her child. Someone, or something, is after Alba, and Lucía quickly enough takes a protective stance for the girl. We don't know much about how she got to the point at the beginning of the film, but it's clear she's smart enough to at least try to herself and her niece safe, even as she tries to figure out whom she can and cannot trust.

Balagueró keeps the story spinning with a lot of dark humour, and broad, with some skewereing of stereotypes particularly of the gang characters. But he keeps women at the dark and disturbing heart of this tale. And using location to his advantage: in the end, what matters is the people that occupy a space and what they bring to it, be it a traditional haungted house, or in this case, a modern enough suburban apartmenbt building in a blank part of town. Anywhere can be scary enough when the occupiers have sinister motives.

With the range of horror that Balagueró has in his fimography, he is more than capable of keeping his hand firmly on the wheel of this story, able to shift tones between crime and horror stories. One keeps us grounded, the other makes us shiver. His work is matched by his star Expósito; it's easy to relate to her, despite the unusual circumstances, as she has to take each step as it comes, with all the danger thrown at her. Her endless determination and refusal to give up, gives us a great new horror heroine.

Venus gives its audience little room to breath, keeping the proverbial hits and literal blood coming at a ever-exciting pace. A highly enjoyable film with horror, crime, buckets of blood (have I mentioned how much blood there is?!?), awesome crafty old ladies, a cute kid, and a kick-ass heroine.

Do you feel this content is inappropriate or infringes upon your rights? Click here to report it, or see our DMCA policy.
Ester ExpósitoJaume BalagueróTIFF 2022Venus