Now Streaming: BLACK BIRD, With a Friend Like This 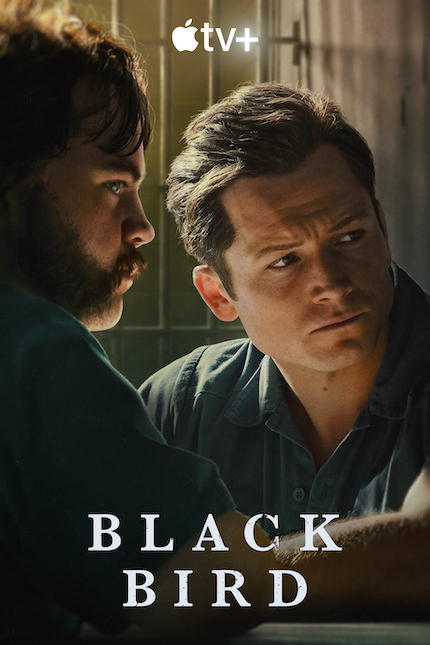 How do you make friends with a serial killer?

Black Bird
The first two episodes of the six-episode series are now streaming on Apple TV+. Succeeding episodes will premiere globally every Friday.

Percolating from its first moments, thanks to a minor-key musical score by Mowgli, off-kilter shot selection by director Michael Roskam, a precisely unnerving script by mystery novelist Dennis Lehane, and the engaging presence of Taron Egerton as a charming drug dealer, Black Bird soon gets down to the business at hand.

Sentenced to 10 years in prison in the late 1990s, Jimmy Keane is offered the chance to 'get out of jail free' -- all he has to do is assume a new criminal identity, transfer to a maximum security prison, and befriend suspected serial killer Larry Hall (Paul Walter Hauser) before he is released on appeal.

Throughout the first two episodes, which are both now streaming, Keane is shown to be a criminal with an engaging manner who smiles freely and makes friends easily. He is not necessarily the violent type, though, and is definitely out of his league compared to the hardened convicts who now surround him, day in and day out. With only minimal training, he must pass himself off as a maximum-security type of convict, someone who is more brutal, savage and lethal, without committing additional crimes behind bars, such that would invalidate the offer of judicial commutation of his sentence.

Previous to his arrest, Larry Hall, the suspected serial killer, has been known locally as a serial confessor, claiming to commit crimes for which no evidence could be located. Then, through dogged investigative work, Brian Miller (Greg Kinnear) lays the groundwork to elicit a confession that looks like it will hold up in court, only to have suspicions cast on Larry Hall's guilt by other authorities.

He teams up with Lauren McCauley (Sepideh Moafi) from the FBI to investigate further, all while McCauley and her boss (Robert Wisdom) endeavor to elicit the location of the bodies from Larry Hall via undercover digging by Keane. As Keane tries to adjust to his new circumstances, a new development (in the third episode) puts his life at greater risk than ever before, and the timetable gets jammed up.

Keane's father is portrayed by the great Ray Liotta. Knowing that Liotta passed away recently makes his performance even more valuable, but it's not easy to watch him play an aging former police officer who remains proud of his son, even though he hates what the kid ended up doing. Watching Liotta give life to a man who is aware of his own imperfections and struggling to help his son, despite everything, pierced my soul.

If the narrative sounds complicated in writing, it doesn't play that way on screen, thanks to Dennis Lehane's meticulous yet entirely absorbing writing. Lehane developed the series from a memoir by James Keane and Hillel Levin, and the show is introduced as "inspired by a true story," which puts it on solid ground dramatically. Lehane is a master plotter, as he's demonstrated time and time again in his densely-layered, compulsively readable mystery novels, including Mystic River, Gone Baby Gone and Shutter Island.

His experience in writing for the screen dates back to The Wire -- thus, the Robert Wisdom connection -- and extends to The Drop (2014), which he wrote for the screen based on his own short story and was directed by -- another connection here -- Michael Roskam. Lehane's other credits include a couple episodes of crime series The Outsider and also Mr. Mercedes.

Thus, it's not exactly a surprise that Black Bird is compulsive and compelling, even though it's not structured like other limited series. I got to binge all six episodes in advance, and they flew by.

It's not because events proceed in a manner that teases without delivering on what is promised. It's more like knowing that your car is going to crash sometime soon, except you don't know exactly when it will happen or if there's anything you can do to prevent or avoid it.

Slowing down won't make a bit of difference. All you know is that the crash is going to happen; it's going to hurt, and it may kill you.