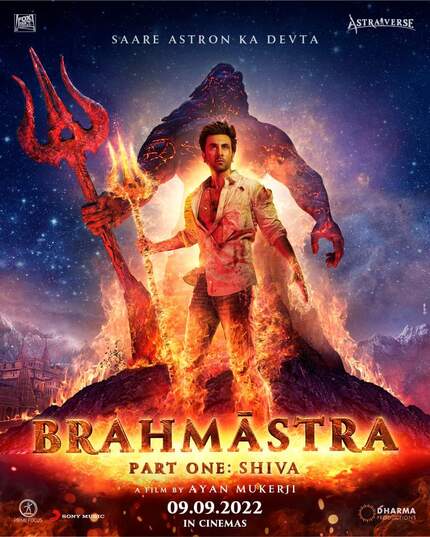 Fox Star Studios and Dharma Productions in India are preparing to launch their newest potential franchise in the superhero saga, Brahmāstra. This isn't India's first superhero film, over the last decade and a half they've made well over a dozen, from the big budget Krrish series with Hrithik Roshan, to A Flying Jatt with Tiger Shroff, to last year's excellent Malayalam language film, Minnal Murali with Tovino Thomas, and too many more to list here.

What is interesting about Brahmāstra is the scale of the feature. This is a big swing for some of Bollywood's biggest producers featuring a lot of their premiere talent. Leading this first film, is Ranbir Kapoor (Barfi, Jagga Jasoos, Rockstar), one of India's biggest young stars and leading men as the fire-friendly Shiva. Alongside Kapoor is another of the leading lights of Bollywood, Alia Bhatt, most recently seen in the excellent Gangubai Kathiawadi and with an extended cameo in SS Rajamouli's runaway hit, RRR.

It isn't just the young actors lighting up the screen here. Bona fide world cinema legend Amitabh Bachchan (Sholay, The Great Gatsby) appears in a kind of mentoring role, and Telugu film royalty Nagarjuna (Shiva) also takes a big swing as another of the super-powered "Astras".

Directed by rom-com specialist Ayan Mukherji, Brahmāstra looks to be anything but subtle, with the VFX dialed up to a million and plenty of loud echo-y shouting. The trailer does a lot of heavy lifting in terms of exposition, but it does seem to be heavily steeped in Indian religious and mythological tradition, which could be a challenge for newcomers. But I'll be damned if it doesn't look like one hell of a spectacle.

Brahmāstra is due in theaters worldwide on September 9th, here's what the official synopsis has to say about the film:

BRAHMĀSTRA – the Trilogy, is a 3-part film franchise and the beginning of India’s first original universe The Astraverse. It is a new original cinematic universe inspired by deeply rooted concepts and tales from Indian history but set in the modern world, with epic storytelling of fantasy, adventure, good vs evil, love and hope; all told using cutting edge technology and never-seen-before visual spectacles.

BRAHMĀSTRA: PART ONE, is the story of SHIVA – a young man and our protagonist, who is on the brink of an epic love, with a girl named... Isha. But their world is turned upside down, because Shiva learns that he has a mysterious connection to the Brahmāstra... and a great power within him that he doesn’t understand just yet - the power of Fire. In this movie, we experience Shiva’s adventures as he journeys into the world of Astras and in turn, discovers his destiny as the DIVINE HERO of the universe.

Do you feel this content is inappropriate or infringes upon your rights? Click here to report it, or see our DMCA policy.
Ayan MukherjeeAlia BhattAmitabh BachchanRanbir KapoorActionAdventureFantasy