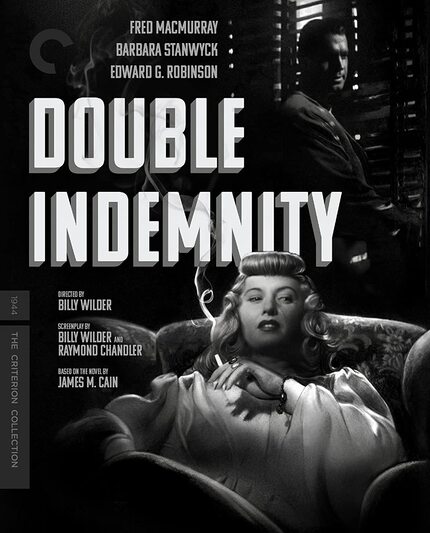 If there is one film movement that Hollywood can lay claim to, it is the Film Noir. A staple of cinema from the late '30s through the '60s and sporadically thereafter, film noir is a genre retroactively coined by the French in reference to a style of film that luxuriated in dark themes and characters, as well as a visual sense defined by shadows. There are hundreds of examples of classic film noir, it's perhaps one of the most exploited cinematic styles of the twentieth century, but only a handful became legitimate classics, and Billy Wilder's Double Indemnity is one of them.

A 1944 production of a 1943 novel of the same name, Double Indemnity has come to embody and encapsulate the spirit and vision of film noir, and with good reason. Adapted from James L. Cain's book by Wilder and detective novel expert, Raymond Chandler, Double Indemnity is the epitome of the style and substance of the film noir movement. A disgruntled wife looking to knock off her husband, a morally malleable insurance agent looking to gain the affections of the above-mentioned murderess, and a lot of double-crossing lead to one of cinema's most lauded examples of noir, or cinema in any genre, to be blunt.

At the forefront is the powerhouse that is Barbara Stanwyck, one of Hollywood's greatest actors at the time, saddled with a silly wig, but no less powerful than her performances in films like The Lady Eve, Forty Guns, or The Furies. Stanwyck's femme fatale Phyllis is like catnip to the otherwise dutiful agent Walter Neff. Neff is portrayed completely against type by all-American boy Fred MacMurray, who would later go on to greater fame as the patriarch of the classic TV series, My Three Sons, but here, he's a man caught in a web, digging himself deeper into his own grave as he foolishly believes that everything will be okay, until it isn't.

Due to its position as perhaps the greatest, but certainly the most archetypal, Film Noir, Double Indemnity has been dissected by hundreds of minds greater than my own. However, I've always appreciated it and though I may not be able to express why in as erudite a manner as many scholars, I'll be damned if I don't want it on the record that this is a perfect film.

The Criterion Collection released Double Indemnity on both Blu-ray and 4K UHD Blu-ray, though it was the former with which we were provided for review purposes. That being said, as a person who has owned Double Indemnity on multiple formats, including the previously released Blu-ray from Universal. Criterion's disc is from a new 4K restoration that presents the film in a more stark edition than previous HD discs.

The cinematography of John Seitz is exceptional, and his use of light and shadow, particularly in the case of the multiple uses of venetian blinds, would come to set teh standard for noir lighting over the next fifteen years. The Criterion version of the Blu-ray leans into the contrast provided by those slats, with blacker blacks and whiter whites, I have to imagine that both Seitz and Wilder would approve.

The mono audio is clear and easy to understand, which is quite enough when it comes to films made pre-surround sound.

When it comes to extras, fans will be thrilled with the bounty of bonus material provided here, both new and archival. There is a commentary track with Richard Schickel that digs into the production, the casting of Stanwyck and MacMurray and so much more, a true joy for enthusiasts. A brand-new conversation between noir guru Eddie Mueller and historian Imogen Sara Smith conducted in 2022 where both gush over the film and Stanwyck as potentially the greatest actress there ever was. An interview with historian Noah Isenberg gives an essential overview of the film, its production and influence that definitely helps put it into context. An archival piece called Shadows of Suspense from the earlier 2006 release that incorporates the thoughts of numerous noir experts, that fans will appreciate being ported over.

The highlight for me, though, is a series of long form interviews called Billy, How Did You Do It? from 1992. In this series, which runs over three hours in three parts, Wilder is interviewed by Criterion favorite Volker Schlondorff (The Tin Drum) about his entire career. It's an engrossing, casual work from both parties. Wilder lets all of his defenses down, long past the point in his career where he cares where anyone thinks and speaks the truth about his Hollywood career. Double Indemnity is a part of the conversation for sure, but Schlondorff goes through his filmography one piece at a time, discussing Marilyn Monroe, Gary Cooper, Humphrey Bogart, and his long association with I A L Diamond, and so much more. Normally I'd balk at an extra of this length, but every minute of this extended interview is gold.

An exceptional essay from Angelica Jade Bastien rounds out the package. Bastien's observations and analysis run the gamut from technical to thematic and definitely give fans a lot to chew on. I'm on record as not being a fan of Criterion's fold out inserts, and sadly that trend continues, but the content satisfies, and this is one of the best essays I've had the privilege of reading in a while.

While I wish we'd had the opportunity to review Double Indemnity in 4K, the Blu-ray is the best the film has looked in that format, and we expect that the 4K disc will follow suit. Highly recommended.

Do you feel this content is inappropriate or infringes upon your rights? Click here to report it, or see our DMCA policy.
Billy WilderRaymond ChandlerJames M. CainFred MacMurrayBarbara StanwyckEdward G. RobinsonCrimeDramaFilm-Noir