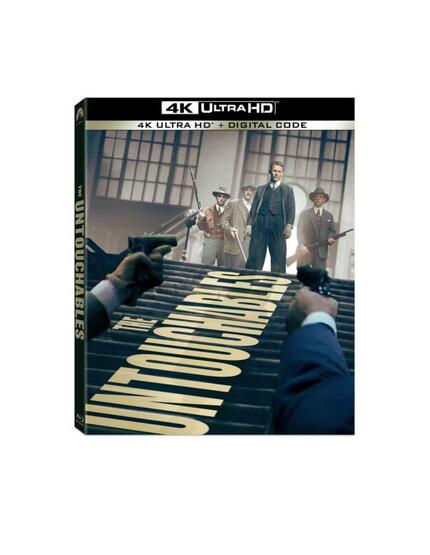 You know, it's funny. I love a ton of De Palma's output, and I've seen The Untouchables several times. However, every time I re-watch the film, I remember just how much I hate most of the characters. I think my brain tends to focus on De Palma's technical directing, his camera moves, and how well shot his films are. I tend to remember his better films. But the characters in The Untouchables?

They’re nearly all one-note, one dimensional manifestations of American justice --- at all costs. Robert De Niro and Sean Connery manage to escape the basics of what’s been written for them, as they’re absolute masters of their craft, and can conjure up deep inner meaning to line their characters’ faces with emotions.

But poor Patricia Clarkson, the ONE female supporting character, is given about four lines in the film as Elliott Ness’ dutiful wife. And she just smiles all the way through her few appearances in the film. Frankly, she smiles as if she’s been lobotomized; at the radio, at her husband, at the violence that later erupts in the courtroom at the end of the film. It’s maddening to watch.

Kevin Costner stars as the American paragon of law who was famous for finally bringing down Elliott Ness. It was his first major role and man, he was not up for the challenge; my dude was as cardboard and unmovable as they come. Thanks, studio execs, for foisting that upon both De Palma and audiences. (There's an interview with the filmmaker in one of the legacy featurettes, and he didn't seem very enthused with having had to work with Costner in the lead.)

Anyway, Ness is a government suit in Chicago during the Prohibition Era who's understandably upset that a child was killed in a mob bombing. After being confronted by the mother of the dead little girl in a very Jaws-like moment, he sets out after his target (De Niro's smarmy and entertaining Al Capone), anger renewed.

All this because the United States wouldn't let people drink.

So as the story continues, Sean Connery's mentor beat cop comes aboard as the trusted elder, with a tiny accountant man thrilled with the potential to "man up" with some potential bloodlust and a young and excellent Andy Garcia playing Italian-American rookie cop George Stone rounding out the group.

Story and character-wise, there are lots of head-shaking, hypocritical moments and decisions, and when maestro Ennio Morricone's score came on for the more... "poignant" scenes, I couldn't help but mutter, "it's the Sad Fascist Blues." These men are a volatile cocktail of toxic masculinity, big surprise.

From the first few scenes, I was shocked at how absolutely clear the picture was while watching the new 4K master. Wow! Throughout the film, I only noticed some minor flickering (among the appropriate amount of film grain) here and there.

In fact, the picture on this release of The Untouchables is so damn clear, that I almost wondered if my TV had turned on that horrid “smooth motion” function by itself. (**Shivers** that invention is not only aggressively dystopian, it’s relentlessly evil toward filmmakers.)

Sound is uniformly excellent as well. This home video release comes with a crisp Dolby Atmos® soundtrack** and a digital copy of the film. As for featurettes, there's around an hour of legacy bonus content in high definition. I liked watching them for details on how the production was made, particularly on the cinematography.

At the end of the day, regardless of character and story, The Untouchables is entertaining, and this is a fantastic release in terms of picture and sound. You can find it wherever you usually find your 4K discs. Just don't forget to exercise your freedom and drink all the way through the film!