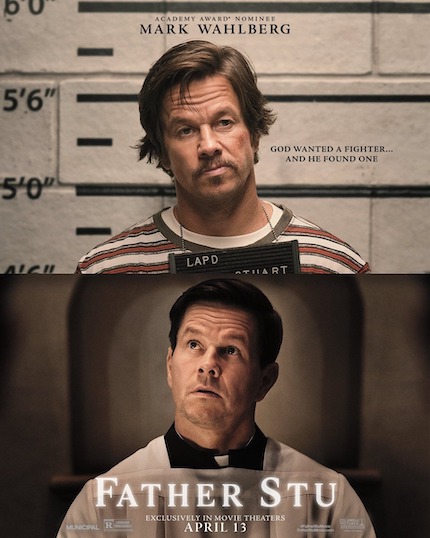 The last time Mark Wahlberg appeared onscreen, he was playing Victor "Sully" Sullivan,  second-lead, dubious mentor, and occasional comic relief to Tom Holland’s Nick Drake character in Uncharted, the long-delayed, much-anticipated videogame adaptation and blockbuster wannabe that came and went just two short months ago without leaving much of an impression box-office or pop culture-wise. (A sequel is in the planning phases.)

While Uncharted may have become a distant memory for some or many, Wahlberg’s back with Father Stu, a faith-based personal project that Wahlberg, no stranger to controversy, primarily funded himself, a decision reportedly inspired by Mel Gibson’s unprecedented success with The Passion of the Christ almost two decades ago.

A directionless, Montana-based boxer with more dreams and plans than common sense or follow-through, Stuart Long faced multiple crossroads in a too-brief life, beginning with his impetuous decision to leave Montana and boxing behind for an acting career in Hollywood. Despite small parts not becoming larger ones, Long remained in LA, working customer-facing blue-collar jobs, including a supermarket gig where he apparently meets the first love of his life, Carmen (Teresa Ruiz), a Sunday school teacher. In pursuing the devout, true-believing Carmen romantically, inadvertent churchgoer Stuart becomes a true believer himself, apparently by osmosis. He gets  baptized and adorns his apartment with religious symbols.

While Long navigates a romantic relationship with Carmen initially based on a lie (his conversion), his spirituality, such as it is, doesn’t deepen until he’s involved in a horrific, near-fatal motorcycle accident, where, presumably oxygen-deprived, he receives a vision of the Virgin Mary, essentially telling him to hold on, carry on, and so forth. It’s enough to turn the recovering Long into a full-blown, doubt-free convert to Roman Catholicism, while also motivating him to make the head-scratching decision to join the priesthood, including the requisite vows of poverty and charity.

It's a decision that understandably leaves Carmen feeling betrayed. Stuart’s long-suffering mother, Kathleen (Jacki Waver), and his abusive, bitter, alcoholic father (Mel Gibson, channeling his public persona into an all too believable performance), are also frustrated, perplexed, or downright upset at Long’s seemingly quixotic idea to join the priesthood after a dissolute, faith-free life.

Written and directed by first-timer Rosalind Ross (the upcoming Barbarian), Gibson’s real-life partner, Father Stu hits all of the faith-based beats efficiently, if all too predictably, from Long’s haphazard, unfocused pre-conversion life, to his personal “Paul on the road to Damascus” moment on an LA street, to the deepening of Long’s faith in the face of obstructions and obstacles, personal and otherwise, to the physical downturn that tested Long’s still nascent faith. Too often, though, Ross’s overbroad, schematic screenplay skips past fully interrogating the physical and spiritual challenges Long faced to arrive at comforting, predetermined answers (i.e., “God’s plan,” “embrace the mystery”) that only practicing Roman Catholics will embrace.

It’s only when the earthy, F-bomb prone Long mixes and matches his out-of-the-ordinary personal journey with religious instruction (e.g., in a prison filled with cynical inmates, his first public sermon) that Father Stu feels like it’s approaching the raw, real-world authenticity that drew Wahlberg to stepping into the title character’s priestly robes in the first place. Father Stu also falls squarely into Wahlberg’s general comfort zone performance-wise: His rough, instinctive acting style, general proclivity for, and attraction to playing white, working class characters throughout his career.

While Gibson’s involvement as both actor and producer was undoubtedly a dubious decision, likely to rankle anyone even vaguely left-of-center, it’s hard to argue against casting Gibson as Long’s virulently reactionary, regressive father. What, however, makes little to no sense beyond contrarianism or trolling, was the decision for Ross to give Gibson an egregiously flippant line comparing his son’s late-in-life decision to join the priesthood to “Hitler joining the ADL.”

It adds an otherwise offensive note to what should have been (and often is) a heartfelt story of finding purpose, meaning, and faith in the face of difficult, even insurmountable obstacles.