Jared Leto and Anne Hathaway star in a series that details the rise and fall of WeWork, debuting on Apple TV+. 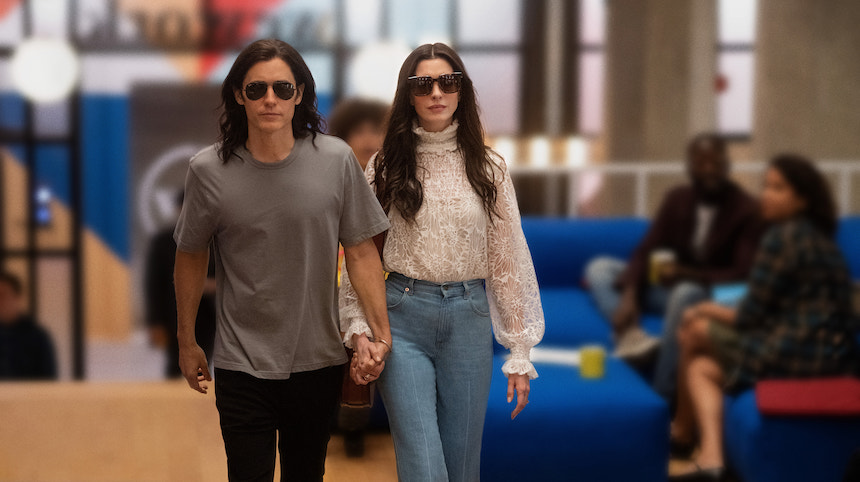 Startups depend upon two things: (1) a great idea and (2) a great leader.

The 21st Century business world is littered with a lot of great ideas that were dreamed up by lousy leaders, wonderfully creative dreamers who should have turned over their great ideas to boring business people who knew how to make money.

It follows that the 2022 streaming world is littered with a lot of great ideas that go on and on and on, stretched way beyond their creative breaking point and the viewer's tolerance for watching arrogant dreamers portrayed by talented performers.

As it happens, The Dropout, starring Amanda Seyfried, dropped last week on Hulu; this week, WeCrashed, starring Jared Leto and Anne Hathaway, drops on Apple TV+. In between, Super Pumped, starring Joseph Gordon-Levitt, dropped on Showtime. All three follow wonderfully creative dreamers behind companies that achieved multi-billion dollar valuations; all the dreamers' dreams eventually ended up in the hands of others.

Yet, like a slow-motion automobile accident on the other side of the highway, failure can be fascinating to watch. Of these three, I've only seen WeCrashed from start to finish, all eight episodes, and I must say that all the accumulated awfulness has been a drag to binge because I felt like my soul was drowning by the end.

Only the first three episodes are available, and that's a good thing. The first two showcase Jared Leto as Adam, a human idea generator from Israel, as he meets Anne Hathaway as Rebekah, an aspiring actress. Immediately smitten, Adam doggedly pursues Rebekah until she succumbs to his sweet persistence.

As a parallel, intertwining story, Adam meets Miguel (Kyle Marvin), a young architect, who helps Adam with a crazy idea about leasing office space and transforming it into a vision for a worldwide community. Together with Rebekah, they begin laying the building blocks for a company that will storm the stodgy old financial markets, roil Wall Street, and sell investors on the idea that their company, WeWork, will somehow turn a profit on the magnificence of their dream and more money, more money, more money.

Leto and Hathaway are wonderfully magnetic together. On his own, Leto is a powerful and charming figure as the fast-talking Adam; he is the consummate salesman. Hathaway is also great as the equally arrogant Rebekah. Both are blind to their own aggressively inflated view of their own personal superiority to every other person on the entire planet, certain that any problems they encounter are due to the puny thinking of puny people.

Created by Drew Crevello and Lee Isenberg from a podcast, WeCrashed goes long on the idea that watching two infuriatingly self-involved yet eminently attractive people, portrayed by two very talented actors, is an intrinsically compelling proposition. The challenge here is that blowing up the story, the main points of which were persuasively covered in less than two hours in Jed Rothstein's documentary WeWork: or, The Making and Breaking of a $47 Billion Unicorn -- now streaming on Hulu -- into a series that stretches over nearly eight hours doesn't bring much more to the story.

It does, however, allow for extravagantly-enacted recreations of lovely sets, impressive production design and exquisite costuming throughout, and the luxury of enjoying two immersive performances at length. Your mileage may vary.

Do you feel this content is inappropriate or infringes upon your rights? Click here to report it, or see our DMCA policy.
Anne HathawayApple TV+Jared LetoKyle MarvinUS