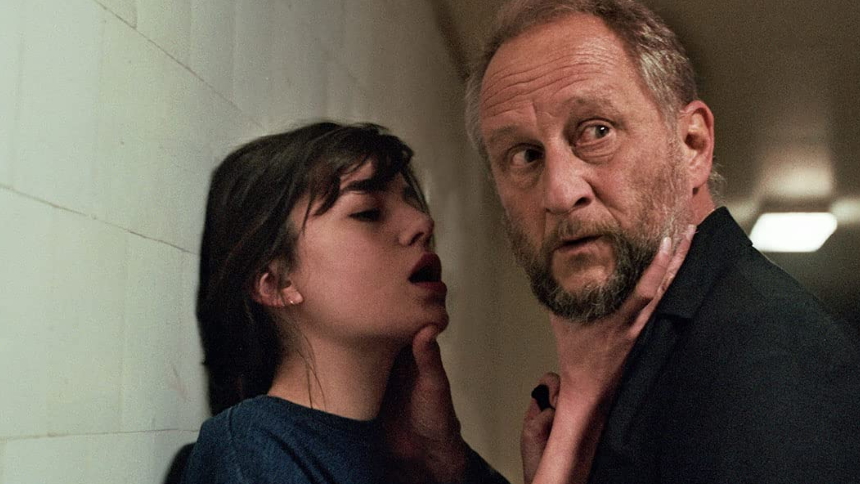 Belgian director Fabrice Du Welz is no stranger here at ScreenAnarchy, as the man has made quite a few eye-catching genre films in the past two decades. His films tend to start as regular thrillers or dramas, but will at some point leave the safe path and go into very uncomfortable territories. From his well-titled feature debut The Ordeal onward, his lead characters always have quite a bumpy road ahead of them.

In his newest film Inexorable it is no different. We follow the successful novelist Marcel, who is married to the extremely rich Jeanne. His wife is also his publisher, and the couple have just moved into a gigantic old mansion with their daughter Lucie, in the hope that the new environment will inspire Marcel to finish his new, long overdue novel.

Then one day, the family dog has gone missing but is luckily brought back home by Gloria, a young woman who just moved into the nearby village. As everyone takes a liking to Gloria, she becomes more and more a friend of the family, even becoming their housekeeper and moving into the mansion. But, and that's a BIG but, Gloria's sudden appearance isn't exactly entirely a coincidence. She has plans for Marcel... or rather, an ordeal perhaps?

So far, so good, and Fabrice du Welz weaves a nice (or rather not-so-nice) thriller together, with influences ranging from Hitchcock, to classic "noirs", to more modern fare. Benoît Poelvoorde is excellent as the flawed Marcel, and we see layer after layer exposed on his face as more skeletons leave their closets. And Alba Gaïa Bellugi is great as his unhinged foil Gloria. But the problem is, there have been many thrillers about parasitic intruders inviting themselves into families already, and quite recently there were two stellar examples in Borgman and the Oscar-winning Parasite. As such you can't help but wait until Inexorable turns into something really special, and while it's definitely well-made, it never does that. When you start thinking about where the plot will be going and where the twists will be, you will probably have a few ideas already. Chances are you'll be right on most of them. When du Welz manages to insert an original scene, it immediately livens up the film, but unfortunately there aren't many such moments.

Still, it sure is not bad, and the audiences at the International Film Festival Rotterdam gave the film a very respectable rating of 3.9 out of 5.