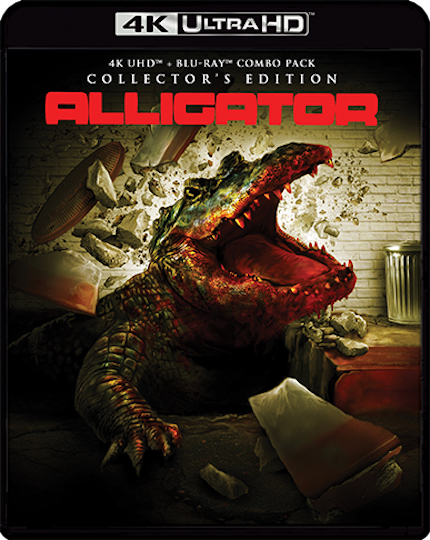 Steven Spielberg is responsible for many things in the film world, including the popular spate of “animals attack” films of the ‘70s and early ‘80s, whether he liked it or not.

One of the best of these films was the 1980 monster-in-a-city flick, Alligator, out this week in a 4K/Blu-ray combo release from Scream Factory. Directed by Lewis Teague (Cujo, Cat’s Eye, The Jewel of the Nile), the film was script-doctored into significance by screenwriter John Sayles. (Shortly after Alligator was released, Sayles went on to direct popular Bruce Springsteen videos and other projects. IMDb currently lists one of his pre-production projects as writing a new Django film, Django Lives! with original star Franco Nero attached.)

Anyway, the plot of Alligator is basically that a baby alligator (just like the urban legend) is flushed down the toilet by the father of a little girl (who sees an alligator attack and kill its trainer in good ol’ Florida) and begins a life of crime in the sewers. There, it dines on the corpses of hormone-infused, dead dogs disposed of in an all-too-complicated way by a shady pet shop owner. You see, the pet shop owner has been supplying a villainous animal testing facility with scores of pups, and this guy has nothing better to do than to make the rounds coming and going.

At least until one day, when the titular alligator in question has become big enough to dine on something larger than pets, and the pet shop owner doesn’t own anything anymore.

The alligator formerly named “Ramon” by its former child owner then goes on a rampage in Chicago (I think), which doesn’t really hold its own standing in for Los Angeles when you see the L.A. River and various red curbs and palm trees.

It’s not high art, but it’s a very good time if you love genre and bits of hilarity. There are of course, many situations and scenes you’d never see today, not in America, which involve unattended children (an actual reality of American life in 1980) and violence that may or may not be hilarious, whatever the intent was. Alligator does have the effect of a heightened reality, heightened enough to pull us out of the one that we seem to be suffering through now. Enjoy.

The extras on these discs (of which there are three) are very much worth mentioning. Check out the list!

Bryan Cranston talks for over 20 minutes on how much he loved working on Alligator as one of his first jobs in a very touching segment. He moved from working as P.A. in the production office and then got an opportunity to become the fourth assistant in the special effects department. Watch him recount the formative experience of doing that and meeting and being wowed by star Robert Forster. It’s lovely.

Director Teague’s interview is similarly moving and interesting; he speaks about how they managed the special effects work and miniatures to create the illusion of a giant gator terrorizing a city. Tiny baby gators with miniature sets was one solution; watch the interview to hear more. It sounds like Teague’s still trying to get projects off the ground, and I wish him luck.

There are many other featurettes, but another highlight is director Karyn Kusama (Destroyer, The Invitation, Yellowjackets) doing a fun “Trailers From Hell” spotlight on the film.

The image quality on this release is astounding, likely the best that the film has looked since its original, limited theatrical release. Shout/Scream Factory has done a terrific job in restoring Alligator; sound is terrific as well. They’ve given a lot of care to this 1980 cult film, and it shows.

Add this super-fun monster movie to your own home video collection by heading over to Scream Factory here.