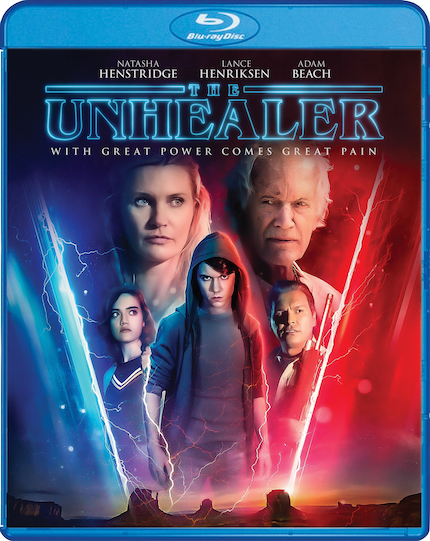 Any movie that A) you’ve never heard of, and B) shamelessly appropriates the Stranger Things glowing typeface for its logo ought to be a red flag.

Goodness knows that there are too many such efforts out there.  The Unhealer, an independently produced bit of “horror with heart” (a phrase, a clearly planted, that’s tossed around more than once by cast members in the promo interviews, which are included as bonus features), turns out to be no exception.

The story follows an odd Arizona teenage boy named Kelly (Elijah Nelson), who suffers from the disease pica -- a compulsion to eat non-food things like plastic cups, pencil erasers, paper receipts, and so forth, all of which he devours -- as he attempts to be healed by a roving charlatan thief of sacred Native American magics, played by an off-the-wall Lance Henriksen of Aliens fame.

The boy’s desperation for a cure is understandable.  He’s regularly hounded by a pack of bullies, who opt to take a multi-generational approach to their tormenting.  They dump him in a public garbage can like their old-school Biff Tannen-esque predecessors, and, like the thugs of today, post it to social media.  Later, a weekend teenage pallet-burning bonfire at the beach gives way to street racing and more aggressive bullying.  You know, just like in The Karate Kid.

Kelly soon develops the supernatural ability to transpose any pain inflicted upon him back to the inflictor.  As far as such things go in movies, it’s a fascinating power, though the rules of use get murkier as the story goes on.  Kelly’s mom (Species’ Natasha Henstridge in a diner waitress uniform) becomes understandably more and more concerned about all of this, as his changes manifest in different ways.

Soon enough, the bullies learn that there’s now more to Kelly than garbage eating. Instead of “Trash Boy” being scrawled on his locker, it now says “Monster.”  Concerned Native Americans come poking around, played by Branscombe Richmond and Adam Beach, but once the bullies push things into potentially fatal directions, Kelly becomes manically unhinged.  Things do not turn out well.  Through all of this mild gore and mayhem, a cute girl who likes him (Kayla Carlson) decides to hang around a lot.  In some ways, she’s the biggest loser in all of this. 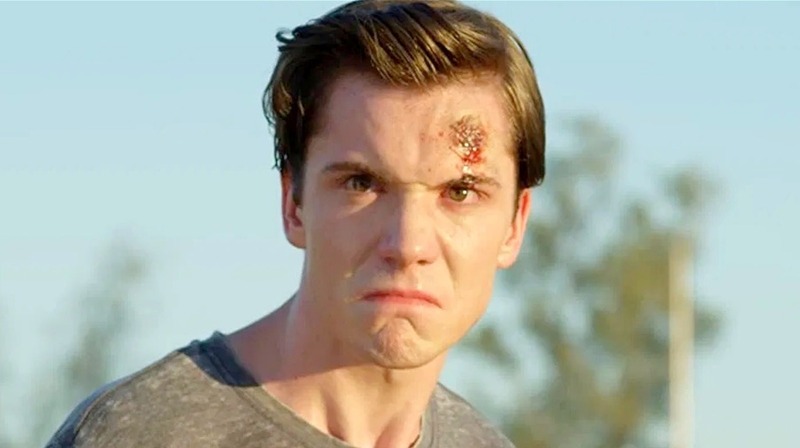 The Unhealer, now available on Blu-ray from Shout Factory, scored a fine cast that fully commits, and makes great use of its rural Arizona desert location.  But the overall film somehow lacks much-needed empathy.  Instead, it seems unsure just how much to commit to its many influences, be they 1980s teen flicks, John Carpenter movies, Stranger Things, or whatever else.

The disc’s bonuses feel like lazy, by-the-numbers, late-‘90s DVD-era tossed-on promo content.  There’s behind-the-scenes interviews, alternative/extended scenes, deleted scenes, and a gag reel.  Let’s talk about the “gag reel”.  Running at just a few mercifully short minutes and intended to impart a summer camp frivolity in regard to the less-than-one-month production, the outtakes, in actuality, depict a tired and draggy bunch.  When an exasperated Lance Henriksen stumbles asking if they’re “going or not [intending to film the scene],” no amount of jovial cutting over “Rockin’ Robin” (bleh) can conceal the obvious grueling vibe of the endeavor.  (As is the case with any low-budget shoot of ambition).

The Unhealer cannot escape it’s made-for-Redbox trappings, though it definitely tries.  Here’s hoping for a better result next time for all parties involved.