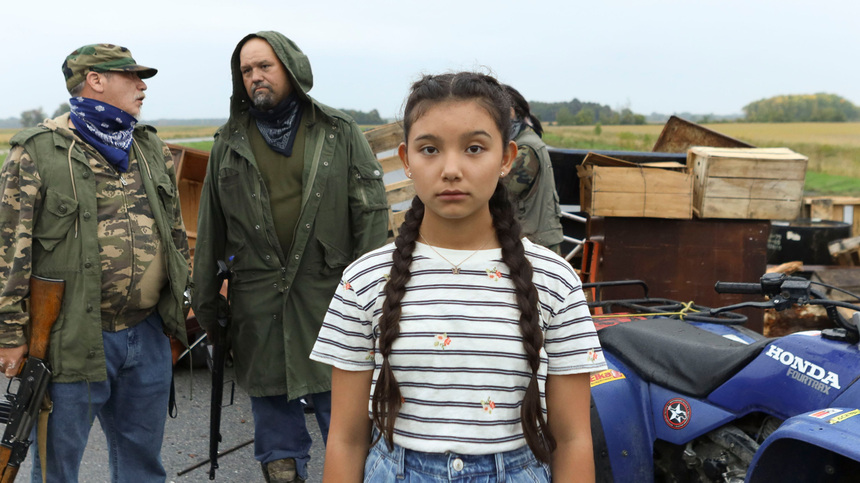 Most coming-of-age stories centre on a pivotal moment in a child's life, that cusp between childhood and the teen years, where their heart still yearns for so-called childish things, but their mind and body are moving them elsewhere. Sometimes these days collide with large events that threaten to change life as you know it, threaten you and your family and world directly, collide with your being that you find yourself in the midst of a crisis for which your young mind has no choice but adapt.

Tracey Deer's feature debut Beans centres a young Mohawk girl, ready for the next phase of her life. But this is also 1990, on the Mohawk reserve of Kahnawà:ke; and as any Canadian and Indigenous person can tell you, it was a pivotal moment in the nation's history, most especially for those under the proverbial and literal guns of their oppressors. It's a remarkable debut, thoughtful and straightfoward in its portrayal of one girl's struggle to comprehend her world and identity, and how she will cope with a society that wants her, and people her like her, to stay oppressed.

Tekehentahkhwa, or Beans (Kiawentiio, Rutherford Falls) as she is nicknamed, is hoping to get into an exclusive private school so she can study to become an artist. Meanwhile, in what begins as a normal summer, she plays with her younger sister Ruby. Her mother Lily (Rainbow Dickerson) wants something bigger and better for Beans, while her father Kania’tariio (Joel Montgrand) thinks Beans needs to toughen up. The opportunity suddenly arises in the worst way, when Kania’tariio and other Mohawks block off a sacred area of land that has been sold to a developer who wants to build a golf course.

As tensions quickly escalate between the land protectors, and the police and white people in the nearby town, Beans finds herself drawn to April (Pauline Alexis, Reservation Dogs), an only slightly older but much tougher girl. Beans' natural cherry nature and enthusiasm are not 'cool', and she tries to slip into a form that doesn't fit. And yet, where else is her anger to go? Like any child her age, she's trying to figure out who she is; hard enough for anyone, between parents, siblings, and peers, but put on top of that a society that calls you a savage and throws rocks at your car. Add in people who will deny your basic needs and rights, who deny your humanity, who impose an identity on you, and that identity will keep you under their proverbial thumb.

As Beans witnesses how her family and community are treated, she is (rightfully) angry. Deer draws from her own personal experience of the crisis, and its shows not only in her sensitivity to Beans as a character, but the forthright narrative. The archive footage from news reports of the real event highlight the blatant racism and hatred towards the Mohawk people, and Indigenous people: this is uncomfortable, as it should be, and frequently upsetting, given how little things have changed. No wonder Beans is angry, and often that anger comes out in negative ways. Not with the cops at whom she rightfully screams for allowing white people to pelt their car with rocks, but in her need to find her own way, she rebels against her father's militancy, her mother's pragmatism, and her sister's devotion - but she finding her own path means taking some bad turns.

Kiawentiio is a marvel in this breakout role; we feel what she feels keenly, we want to shout with her and protect her, though mostly we want her to root for her as she stumbles along the path to finding herself and combining what she was as a child and what she will be as an adult, feeling comfortable, and most importantly, proud in her skin. She wants to be cool, attractive to boys, tough like her father, smart like her mother; and she is or will all of these things, but getting is there is the battle she faces, in the midst of the chaos of her world.

Beans stands out not just as a coming-of-age tale, with a lead character whose struggle we understand and feel keenly, but as a drama of a painful and pivotal moment in Indigenous and Canadian history, one that continues to reveberate even 30 years later.

Beans debuts in select theatres and on demand in the USA beginning November 5th.

Do you feel this content is inappropriate or infringes upon your rights? Click here to report it, or see our DMCA policy.
Tracey DeerMeredith VuchnichKiawentiioViolah BeauvaisRainbow DickersonDrama