True events of an escape from Auschwitz-Birkenau extermination camp are in the center of the pulse-racing Holocaust thriller.

Slovak director Peter Bebjak has become the most prolific filmmaker in the Slovak-Czech territory and the most sought-after craftsman for small-screen projects.

In addition to his ballooning list of mostly crime series, Bebjak has been tinkering with different genres in each of his big-screen efforts and remains tilted towards arthouse cinema. Bebjak's arthouse-ish genre filmmaking became apparent when his crime drama The Line won the award for the Best Director at the Karlovy Vary International Film Festival and became a box-office hit on domestic turf as the second most-visited film that year, beating out even the competition of U.S. imports. While being constantly busy back and forth between episodic and feature projects, Bebjak and his crew have been working on his most ambitious project on a long-term basis, Holocaust drama The Auschwitz Report.

The Auschwitz Report is based on the life story of Alfréd Wetzler, who, along with Rudolf Vrba, were the two Slovak Jews who managed to escape from Auschwitz in 1944 and report on what was going on behind the barbed wire fence of the concentation camp. Their testimony became known as the Vrba-Wetzler Report, which was later used at the Nuremberg trials.

Wetzler and Vrba each wrote their own memoirs. The Auschwitz Report is loosely based on Wetzler's account, captured in the book Alfred Wetzler: Escape from Hell. Vrba and Wetzler became unsung heroes, whose achievement has not been immortalized on the big screen. yet unlike the one of Sir Nicholas Winton, whose admirable deeds were turned into several films,  including a docudrama by the Slovak director Matej Mináč, Nicky's Family. 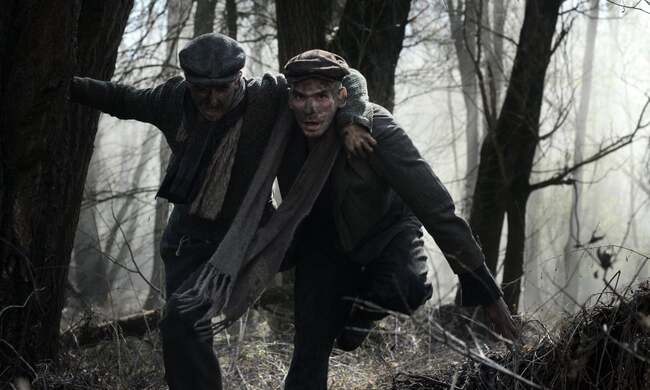 The Auschwitz Report begins with Wetzler and Vrba getting ready for the escape. The film captures basic routines as the two protagonists are in hiding and awaiting the best moment to flee the diabolical complex of concentration and extermination camps in Auschwitz.

At this point, the plotline splits into two strands, one focusing on the protagonist duo while the other focuses on the collective of prisoners from the unit that Vrba and Wetzler were assigned. They are enduring inhuman punishment for the absence of the two Jews, with the degree of violence growing by the hour.

The plot structure of The Auschwitz Report is divided into three distinct parts, the first entailing the preparation for the prison break while demonstrating the mounting tension between prisoners and Nazi officers. Bebjak utilizes different genre framing for each of the three distinctive segments.

The first act unfolds as a slow-burning thriller while the following act switches gears to an adrenaline-fuelled prison break and hunt. The two protagonists wander through forests and mountains hurrying to evade suspicion and find relevant authorities.

The film's middle part turns into a survival film before the last act that replaces the suspense of the prison break for the suspense behind the negotiation table. The grueling journey does not end just by reaching the destination, which adds to the frustration of Wetzler and Vrba, especially since every hour they are missing is weighted against another atrocity. 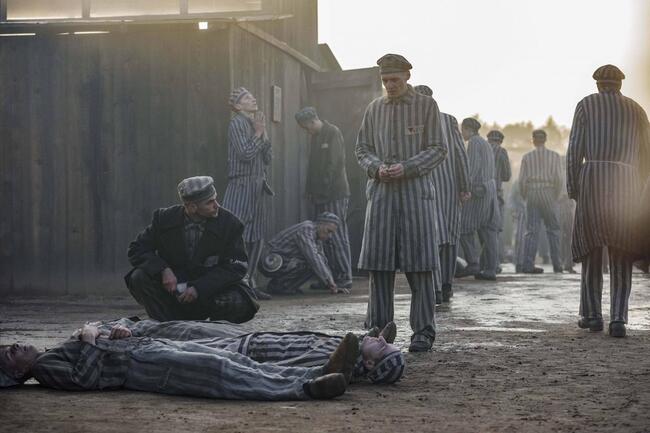 The Auschwitz Report has been lensed by Bebjak´s frequent collaborator, DoP Martin Žiaran, and Žiaran finds a different visual language for each act. Initially, Žiaran puts focus on faces and hands as the leading protagonists remain in hiding, with medium shots of the unit reserved for daylight alterning with chiaroscuro night scenes shot with wide-angle lens.

As the pulse gets racing during the escape, the kinetic handcam adds gravity and urgency to the mid-act. For the final part, Žiaran adopts a sedate movement in a single-shot that carefully follows the verbal exchange deciding the life and death of thousands of lives, especially if the core of the argument is to prove that Auschwitz is far from the resettlement camp that Germans made the Red Cross believe it was. Bebjak and Žiaran interrupt the linear narration by inserting a scene with a new arrival that turns for the worst in an impromptu massacre, which Žiaran shoots from a bird's eye perspective as a counterpoint to horizontal ground action.

The Auschwitz Report does not need to forensically recreate the crimes against humanity as tone-down suggestions remain telling. (None of the scenes contains ovens, towering chimneys, or mass graves, with one sole exception in the beginning of the film showing a dehumanized pile of corpses.) The majority of the story takes place beyond the confines of the Auschwitz-Birkenau camp, although there is a constant reminder of what is going on with Vrba-Wetzler's unit materializing the costs of the escape.

Similarly to The Line, no matter how counter-intuitive it sounds for a Holocaust movie, The Auschwitz Report also straddles the genre and arthouse filmmaking. The genre serves as a vehicle for an important message without overt didacticism, while building an emotional bridge with an audience.

While heavily inspired by true events, The Auschwitz Report is not a proper biopic, as the plot unfolds over a tiny slice of historic events, eschewing Rudolf Vrba and Alfréd Wetzler´s backgrounds and their eventual fates and the creative license applied for augmenting the suspense. Nevertheless, Bebjak and his co-writing partners Jozef Paštéka and Tomáš Bombík shifted the story of the protagonists' suicide mission to be of a hopeful message in the bleakest period of mankind´s history as a small effort can turn the tables against an unforgiving system.

The Auschwitz Report will be released on September 24 in select theaters in Los Angeles Dallas, Seattle, Detroit, and Minneapolis, as well as via various Video On Demand services.