Review: COMING HOME IN THE DARK, New Zealand Family Must Face the Past 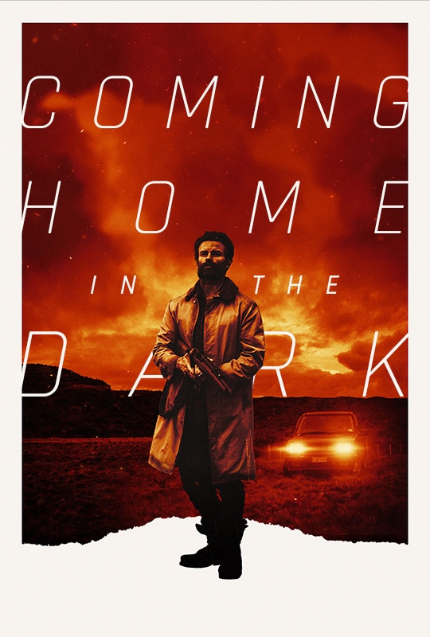 During a picnic, they are interrupted by a couple of strangers with weapons and a peculiar attitude. The confusion doesn't take long to clear up, although the fear continues: they are being assaulted.

Their vehicle and some belongings are the criminals' main target. The leader of the thugs, Mandrake (Daniel Gillies, memorable) - who, unlike his silent partner, Tubs (Matthias Luafutu), is outspoken and radiates some charisma, despite being a bastard - announces that they'll be able to retire with their stolen goods.

The horror seems to end for the family... until one of the sons refers to his father (Erik Thomson) by his nickname: Hoaggie, short for Hoaggenraad. This draws the assailants' attention, the surname is familiar to them.

Another vehicle is approaching, the armed robbery that hadn't had major setbacks up to that moment gets complicated. Once they prevent the others from noticing something strange, Mandrake assures the family that they'll regret not taking that opportunity to fight back. And yes, they will.

Coming Home in the Dark soon turns brutal, a demonstration of the cold blood with which humans can act. The initial confusion of the family before the assaulters return in the worst way, is now linked to violence and tragedy.

The film becomes a very different type of road trip. The criminals take command and, little by little, it's suggested that their attack has another motivation. Could it change the whole meaning? Could we be facing a revenge thriller?

Ashcroft's film aligns with those stories as it becomes clear that the victims - in this case specifically the father, Hoaggie - are hiding something murky about their past that their loved ones are unaware of. Not even his wife, Jill (Miriama McDowell) has any idea why her life has just been completely ruined.

It's fascinating how the approach to a tough social issue that has been extensively addressed by cinema is turned around. I'm talking about the systematic abuse that occurs in boarding schools against students. If movies like If.... - or its contemporary derivation with comedy and fantasy, Slaughterhouse Rulez - take us inside these type of schools, Coming Home in the Dark presents the fate of two youngsters who experienced the abuse in their own flesh decades ago (in the 80s) in a New Zealand all-male boarding school.

Did you connect the dots? Two of the maltreated boys, put down by authority figures - even potential victims of sexual abuse - are consequently marginalized adults in the present. They steal cars and are capable of murder. In contrast, we understand that Hoaggie has had a long and successful career as a teacher, even though he was once close to the harsh reality of a boarding school.

Coming Home in the Dark is still a genre film. Its execution is that of the classic exponent about crime or revenge plagued with setbacks: the victims try to take advantage of any opportunity to fight back; innocent people's blood is spilled, because they were in the wrong place at the wrong time. In addition to the ingredients that usually leave you frozen, in a good dramatic sense, here it is linked to the horror that was lived in boarding school, still present decades later.

The film attempts to subvert the known expectations of this type of genre film. This makes it anticlimactic, without any Asian-style shock. Although it seems to go that way, it's not about settling a specific dispute. The teacher's background is more complex, addressing issues of complicity, inherent in any systemic problem.

Developed over a few hours, taking as a starting point the coincidence of two perspectives (trauma and guilt), Coming Home in the Dark explores how the darkness of the past is not erased and returns when you least expect it. Even if, at least physically, its representation (the boarding school) is literally in ruins. Only they know what happened there. The film is a more interesting production due to its themes, rather than entirely effective in the execution of its climax.

Review has been edited after its publication in February 2021, in connection with the Sundance Film Festival. (A version in Spanish of the original review was published at Cinema Inferno.) The film will open in select theaters and on VOD on October 1 via Dark Sky Films.

Coming Home in the Dark

More about Coming Home in the Dark