Now on Home Video: SUMMER OF 85, Getting Hot in Here

Felix Lefebvre and Benjamin Voisin star in a film by Francois Ozon, now on Blu-ray and DVD from Music Box Films. 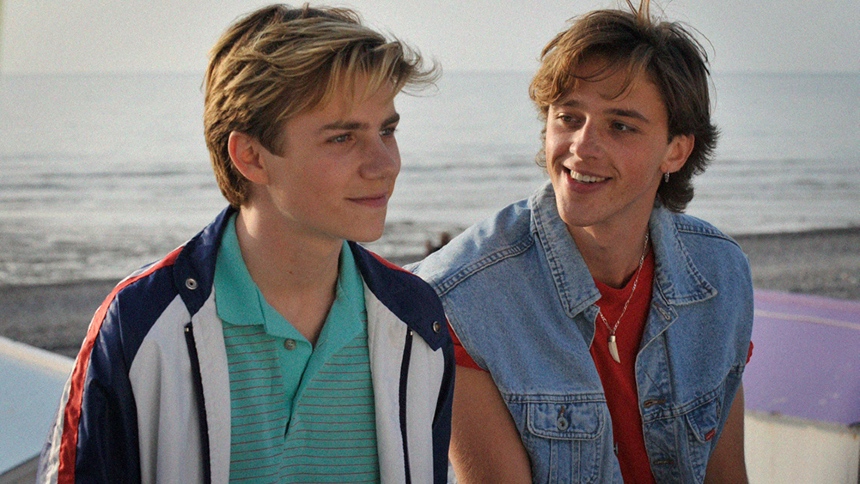 Summer of 85
The film is now available on Blu-ray and DVD, via Music Box Films.

"François Ozon (Swimming Pool, Criminal Lovers, Sitcom) goes back to his roots and concocts a naughty and delicious Hitchcockian summer fling movie, based on a 80s British YA novel Dance on My Grave by Aidan Chambers.

"With a sunny resort town on the French Riviera as a backdrop, Summer of 85 blasts off with The Cure's In Between Days and introduces our young protagonist, Alex (Félix Lefebvre), an angel-faced 16-year-old high-school student on the verge of self discovery. Alex is accused of some grievous crime that might have caused the death of his friend David Gorman (Benjamin Volsin).

"As usual, in a true Ozonian fashion, the director throws in a red herring, leading us to believe that it's a murder mystery. The film slowly reveals what really happened that fateful summer in flashbacks as Alex narrates his side of the story within the story."

So began our own critic Dustin Chang in his review, published in June, which concluded:

"The film is an erotically charged period piece, filled with pastel colors and 80s pop songs. It's a deliciously seductive summer fun movie."

I've watched the Blu-ray, which was just released in time for the conclusion of the summer season, and I agree with every word of Dustin's review. The Blu-ray itself, from Music Box Films, looks glorious; the transfer is quite good, the sound features a tremendous dynamic range, the English subtitles are easy to read, and I appreciate the special features, which is a specialty of Music Box Films and reflects what they've done in the past, especially with Ozon's films:

Ozon notes that he was just 17 when he read the novel that serves as source material for the feature, and that it had a profound influence upon him. He later imagined it might be his first feature; instead, it took more than 35 years for his dreams to become a reality.

The final feature listed is Ozon's excellent, evocative A Summer Dress, a 15-minute short film that Ozon made in 1996, and which is homaged in the feature film, both in the relationships and in the titular costume.

This is a great package, especially for Ozon fans, and is highly recommended.

Do you feel this content is inappropriate or infringes upon your rights? Click here to report it, or see our DMCA policy.
Blu-rayFranceFrancois OzonMusic Box Films

More about Summer of 85