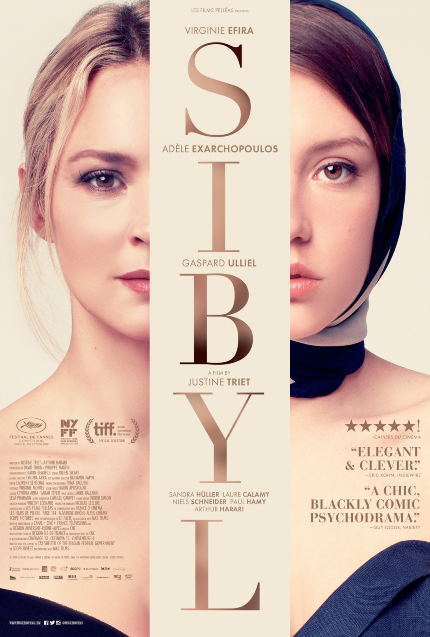 Once a writer, always a writer.

Sibyl
The film is now available on DVD from Music Box Films. It is also available to watch via Music Box Direct.

Psychotherapist Sibyl (Virginie Efira) is having a mid-career crisis.

After a decade in which she has built a respectable practice in her professional career, while at the same time building a safe and comfortable family life with her husband Etienne (Paul Hamy) and two adorable children, Sibyl decides it is time to return to her roots as a novelist.

Understandably, this has (sometimes) troubling repercussions for her patients. She decides to keep just a few, and finds herself unable to turn away a desperate plea for help from a new patient, Margot (Adele Exarchopoulos), an actress who says she is pregnant and cannot decide whether to have an abortion or not, owing to pressure from her boyfriend, a 'famous' actor.

As Sibyl has trouble getting started on her new novel, she commits fully to Margot and learns about her relationship with the actor, Igor (Gaspard Ulliel). Their relationship is quite complicated, since Igor is married to Mika (Sandra Huller), who is currently directing the film in which both Igor and Margot are starring. Bad timing, I'd say!

In turn, Sibyl's search for inspiration brings back memories of her own troubled relationship years before with the dashing Gabriel (Niels Schneider). Sibyl and Gabriel easily fell into passionate sexual encounters, but it seems that the relationship overall may not have been emotionally healthy for either of them.

Directed by Justine Triet (Victoria, 2016), who co-wrote the screenplay with Arthur Harari, the film plays from the perspective of Sibyl's mind, which means it is constantly shifting from past to present, and from fiction to reality. What is true and what is real? It's never entirely clear, which also applies to our individual lives as well, whenever we lie awake at night in the comfort of our beds and/or loved ones.

Music Box Films presents the film on DVD in a fine presentation, supplementing the complex, thoughtful picture with several helpful special features. A 20-minute segment combines individual interviews with the director and most of the lead and supporting players, evidently at Cannes after the film premiered at the annual festival there.

A photo gallery of behind-the-scenes shots, three teasers, and the theatrical trailer are also included, along with a handful of trailers for films from Music Box Films.

Sibyl presents a good-sized chunk of a woman's life as she works out haunting memories from her past, deals with challenges of today for herself and her family, and contemplates the future. Recommended.