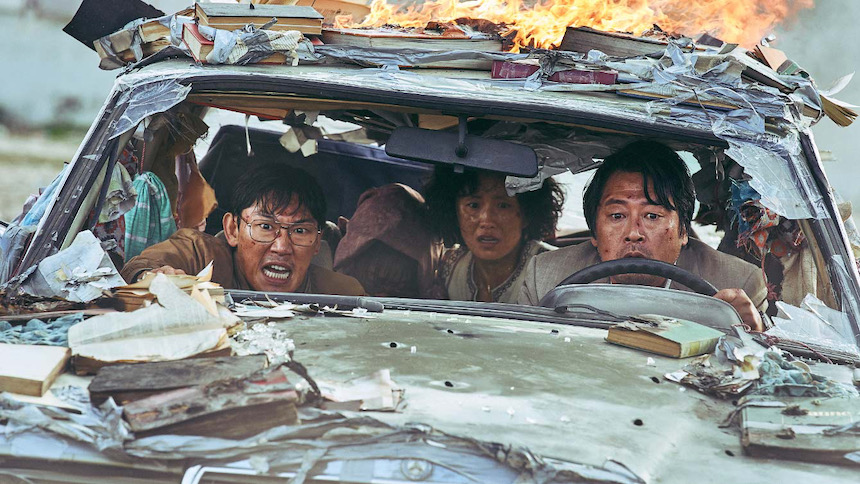 As violence erupts in the African nation of Somalia, delegates from both North and South Korea scramble to evacuate the capital city of Mogadishu in Ryoo Seung-wan's action-packed political thriller Escape From Mogadishu, which was the opening night film at this year's New York Asian Film Festival.

In the late 1980s, South Korea and its contentious Northern neighbour were both lobbying to be admitted into the United Nations. As Africa contained the most member countries at that time, it fell to the Korean ambassadors in those regions to curry favour with local African delegates. Escape From Mogadishu picks up in December 1990, as the South Korean Ambassador to Somalia Han Sin-seong (played by Kim Yoon-seok from The Chaser and The Yellow Sea) is hoping to secure a meeting with President Siad Barre, as is Han's opposite number from North Korea, Ambassador Rim (Heo Joon-ho). Before either diplomat can achieve their goal, however, the city is overrun with guerrilla violence, as rebel groups battle to take control of the country and topple Barre's dictatorial regime.

Camped out in their respective embassy compounds, both delegations realise that their only hope of survival is to flee the country. But with communications cut off, preventing them from contacting their embassies in neighbouring Kenya, their only hope is to negotiate help from other allied nations also attempting to leave. The situation is exacerbated further when the North Korean embassy is attacked and Rim and his staff are forced to evacuate. Unable to reach their Chinese allies, the Northerners do the unthinkable, and turn to their Southern counterparts for help.

Director Ryoo Seung-wan has established himself as one of South Korea's most consistent purveyors of tough, testosterone-fuelled thrillers. From Crying Fist to City of Violence, The Unjust to Veteran, Ryoo's work is polished and kinetic, and regardless of whether he is dealing with gangsters, deadbeats, cops or bureaucrats, his narratives are propelled almost exclusively by bravado and bull-headed machismo.

Coming off the overly ambitious, overly jingoistic prison drama The Battleship Island, Ryoo now attempts his most challenging production yet. Escape From Mogadishu was filmed entirely on location in Morocco, which is ironically where Ridley Scott shot his 2001 military thriller Black Hawk Down, which focused on a later chapter of the same conflict. Ryoo's film, however, deals not with combat-trained army rangers, but with ordinary civilians, and as such recalls the type of politically-charged action thriller Hollywood excelled at in the eighties and nineties.

Films like Under Fire and Salvador, the Jack Ryan caper Clear and Present Danger, or more recently Ben Affleck's Argo come readily to mind, films in which US foreign policy inevitably destabilises third world regimes, leaving them in chaos. These frenetic, high-stakes dramas focused on protagonists who were not front-line military tacticians, but journalists and office workers, for whom the danger is more palpable, and for audiences, more relatable.

Escape From Mogadishu is at its best during these high-stress, life or death moments, not least the nail-biting climax during which a fleet of civilian vehicles must snake their way threw bullet-strewn back streets in a Hail Mary effort to reach the airport. Ryoo's screenplay, however, has loftier ambitions. By forcing members of the North and South Korean delegations to collaborate in a neutral situation, where neither side can be accused of being responsible, and where everyone else essentially perceives them as being equal, the film hopes to make a grand statement about the futility of their ongoing rivalry and conflict back home. But when handed the mic, Escape From Mogadishu has precious little to add to the conversation.

Characters are drawn in broad strokes: Jo In-sung is the film's de facto hero, a handsome, righteous South Korean intelligence officer, willing to step up and guide them confidently to safety. Koo Kyo-hwan, conversely, is almost cartoonishly evil as Jo's North Korean opposite number, weaselly and sadistic, spitting venomous insults and patriotic propaganda in an almost indecipherable dialect requiring subtitles of its own. Both ambassadors, though loyal to their respective causes, are ultimately level-headed pragmatists willing to strike a truce for the greater good. Everyone else is just a helpless woman or child on hand to cry and cower and, hopefully, not die.

The end result is a big, brash, but empty spectacle. Entertaining on its surface for those demanding little more than two hours of perilous adventure, but a somewhat perplexing ordeal for those seeking something more substantial. One had assumed that considering the sheer scale and effort that went into the production, Escape From Mogadishu might have had more to say. As it stands, it does nothing to advance the conversation concerning the Han peninsula's seemingly endless domestic rivalry, and not a single thought regarding the Somali people or the nation being so inconveniently ravaged around them.

Do you feel this content is inappropriate or infringes upon your rights? Click here to report it, or see our DMCA policy.
Escape From MogadishuNew York Asian Film FestivalNYAFFRyoo Seung-wanSouth Korea

More about Escape From Mogadishu