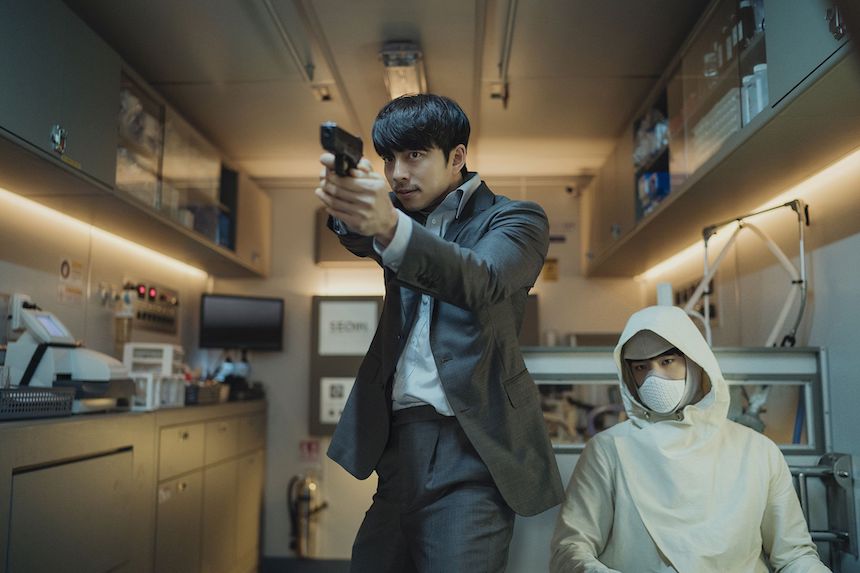 Directed and written by Lee Yong-ju, (Posessed, Architecture 101) South Korean blockbuster Seobok was one of those festival films that I happened upon and loved. Thanks, Fantasia (who has the Canadian premiere)!

I'm not sure what's going on in South Korea's film schools and culture, but it's magic. They know what they're doing. I'm trying to come up an example of a not-so-great South Korean film, but I can't; so whenever I see that a production from that country, I know I'm in for some high-quality horror, thrillers, crime tales, and vengeance.

Anyhow, Seobok is the story of Min Ki-hun (played by Gong Yoo, of the spectacular Train to Busan) who's looped back into service, this time for high-security scientific facility powered by a shady military operation. Like Liam Neeson's popular character in Taken, Min Ki-hun has a very particular set of skills that make him a nightmare for his adversaries.

Unlike that film, Seobok has a deeper philosophy on the injustices of the world --- which in this case, pertain to the unprecedented powers of man and creation in the story. Stories have played with men creating new forms of life for awhile now, since Mary Shelley's Frankenstein brought the concept into public consciousness.

Min Ki-hun is tasked with protecting the world's first, undying human clone, named Seobok by one of the head scientists. He's created with DNA from the scientist's long-deceased son, and though he calls her "Mom," there doesn't seem to be much affection between them. I don't think I'd be close to anyone who constantly experiemented on me, either. Later on, there's a scene where Seobok visits her dead son's final resting place in order to see where he's come from in a physical sense. Tears are shed in this poignant moment.

But I digress. It's revealed that Min Ki-hun is dying from a terminal disease, and that the scientists can help him live forever if he joins their program. Because death is terrifying, he relents. When transporting Seobok to a different location, Min Ki-hun is attacked by American military, and he barely manages to escape with the clone. On the way to a safehouse, they end up traversing through a small village, and Seobok is rightly curious about the outside world. Elements of humor and exasperation humanize the situation.

It isn't long before there are dueling words between factions of the company that own the clown. This results in violent double-crosses, as well as some funny, figurative dick-swinging contests between the narcissistic men who want to continue playing God, no matter the consequences.

Like Charlie in Firestarter, Seobok posesses telekinetic powers and longs to escape the military complex's clutches. A big-budget finale wows, but come for the deep philosophical questions that the film asks: how far is too far? Do humans get to control life itself? And which among us is "worthy enough" to live forever, and at what cost?

Seobok is an impressive feat --- existential science-fiction wrapped up in a blockbuster package. I can't recommend it highly enough. Well Go USA appears to be the distributor here, so North American audiences should get to see this film sooner than later. In the meantime, Seobok can be seen on demand via Fantasia (geoblocked to Canada).

Do you feel this content is inappropriate or infringes upon your rights? Click here to report it, or see our DMCA policy.
Fantasia 2021Sci-FiThrillerLee Yong-juPark Bo-GumGong YooJang Young-NamAction