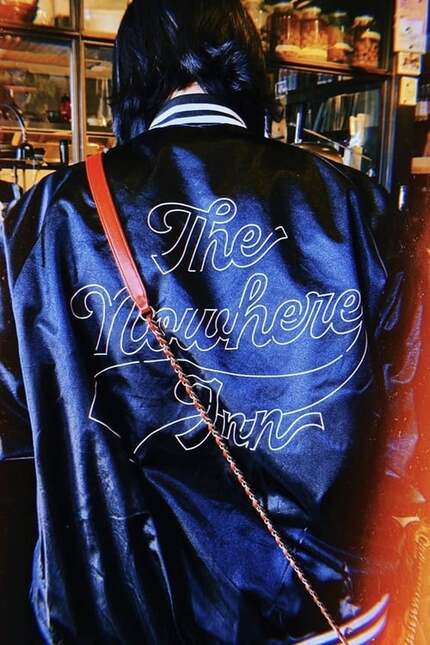 At a crucial turning point in The Nowhere Inn, a woman, clad in bright-colored latex, quips to the camera. "This is how rockstars act in movies," she says, cigarette in hand. Scratch that, she tells the film crew. She can do better. So she does, this time with intensity welling out of her razor-sharp leer and well-toned visage. The film then cuts to a handsomely shot 16mm footage of her onstage performance. The music envelopes this moment with an atmosphere fit for a bona fide rockstar. And for a moment, we buy into her illusion that St. Vincent's icon and person are one and the same, despite the obvious fabrication we've just witnessed.

In reality, St. Vincent is merely an onstage persona. She's played by Annie Clark, the 'subject' of this faux-docudrama directed by Bill Benz. Clark plays a fictitious version of herself, one who doggedly heeds to every fan's request, and rather ordinarily, likes to waste hours on Nintendo Switch games. This is an issue for her best friend, Sleater-Kinney's Carrie Brownstein (also playing a version of herself), whom she enlists to direct a documentary tells "her own story."

If it sounds strange, it's because it is. Part parody of celebrity-docos and part encore of a distinctly Lynchian nightmare, The Nowhere Inn is an intoxicating thriller about fame and artistry, both colossal culprits to which celebrities and artists lose their any and all sense of self. It's reminiscent of Mulholland Dr. in its showing of the frailties of artists that make them privy to self-desolation. That goes both to Clark and Brownstein--the former an artist whose person is bested by her persona, the latter a filmmaker unable to find herself in her own piece. As Clark points out at some point in the film: "All of it is me. And none of it is me."

There's a whole subset of horror-adjacent films that make creatives' hair raise, from The Shining to The Devil's Candy. And while it defies this categorization, Benz's film pulsates with similar fears, haunted hotels notwithstanding. The Nowhere Inn gets real without warning. Talks about constant failures and becoming uninteresting get heavy, but heavier is the reminder that artists nurse their inner saboteurs. Color within or outside the lines, an artist will shroud in self-doubt and sabotage either way.

The movie gets spooky, too. Skillfully lensed, scored, and soundtracked, scenes carry on with a heavy sense of unease. When it doesn't overindulge with punchlines and meta-commentary, the film gets properly scary. The rear end of the film has the most chilling moments, as both accomplished, multi-faceted women succumb to varying degrees of insanity in the name of their craft. The bit towards the end is nasty, putting all prior "reclaiming the narrative" efforts to shame.

Though it has some parts better pruned, The Nowhere Inn is a remarkable subversion on 'documentaries' about recognizable artists. It is smart, unusual, and often beautiful. It is difficult to box into a description without diminishing it, but I turn to St. Vincent's song, "Los Ageless". It's all but burnt pages of unwritten memoirs.

Do you feel this content is inappropriate or infringes upon your rights? Click here to report it, or see our DMCA policy.
Bill BenzCarrie BrownsteinSt. VincentDakota JohnsonComedyDramaHorror