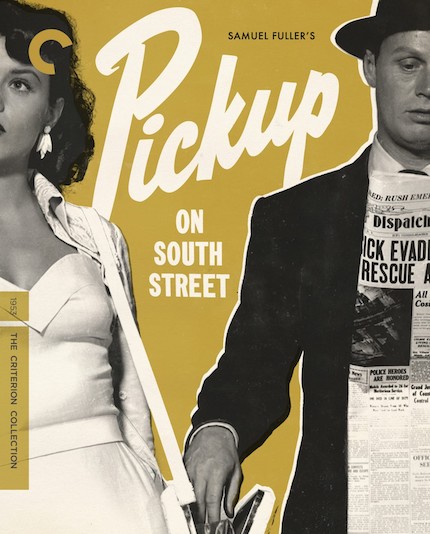 Pickup on South Street was released in 1953 and directed by Samuel Fuller (The Baron of Arizona, The Crimson Kimono, Shock Corridor). This 80-minute noir is an in-depth look at the seedier side of society, in which Fuller was well versed. Watch any of the supplements on this release and he'll regale you from beyond the grave with glee on how he admired people existing outside of the system, aka criminals and those who made their own path.

The film centers around a few criminal elements, but mainly on Candy (Jean Peters, who later married Howard Hughes), a moll who decides to get romantically involved with Skip, a pick-pocket who lives in an overwater shack abutting the Brooklyn Bridge. Skip is played by Richard Widmark (Don't Bother to Knock, Coma), who does surly and insolent extremely well, having inhabited other dark characters, such as the psychopathic killer in Kiss of Death.

Anyway, Candy is on her way to making quite the illegal delivery (though she has no idea what she's delivering) when she realizes someone's stolen the goods right out of her purse on the subway. That person is Skip. This opening scene has a pretty spot-on depiction of riding the NYC Metro, even back in the early '50s --- you can practically feel the sweat and smell the body odor --- and that one extra is more than suitably annoyed.

Candy then calls her ex Joey for whom she's making the drop, and he instructs her to abort the mission. As it turns out, Candy was carrying top-secrect US information on microfilm. As this took place in the '50s, the Cold War was heating up. Hollywood itself had its own reckoning and blacklist.

After some manhandling by Joey, Candy goes to investigate. She finds Skip, but not before we get to know him and his very lonely friend Moe, played by a terrific Thelma Ritter (All About Eve, Rear Window). This role was one of the six for which she was nominated for an Academy Award, and when you see her death scene, masterfully directed here, you'll know why.

Candy inexplicably falls in love/lust within 24 hours with the terrible Skip, who should never date anyone. He swindles her for a huge payday and treats her quite roughly, which is apparently a thing with Fuller's characters. Funny enough, he was opposed to violence in real life, but depicted much of it on celluloid. A catharsis of the psyche.

The filmmaker cut his teeth reporting events (and mingling with dark elements) at the salacious New York Journal, where he worked at the tender age of 17, and later went on to fight in WWII. For his spotlight on mob and underworld dealings, Fuller was hugely influential on Martin Scorsese, and you can even read a bit about what Marty has to say about Fuller via the robust, included booklet.

To continue with the story, Candy and Moe both go to bat for the non-deserving Skip, one woman losing her life, and the second beaten and shot. Initially, he wasn't especially concerned about whose hands the microfilm end up in, only that he gets a $25,000 payout.

Finally, out of a smidgen of guilt, nigh more than a gleam in the sociopath's eyes, Skip begins to act more moralistically. But will it last? Pickup on South Street ends in kind of an oddly upbeat scene, with Skip and Candy ready to try a life together. Somehow I doubt they'd succeed, with all Skip's terrible qualities and proclivity to annoy and provoke cops, but hey, Hollywood ending.

Despite the story flaws and the film's hyper-masculinism that's wielded like a machete, there's plenty to admire about Pickup on South Street. The characters are gritty and feel real, hewn from the inner city. There are tons of fun touches, like a stoolie picking up money with his chopsticks as he's eating (ew, but amazing). Fuller's direction is excellent; his choices of where and how to stage the camera are hands-down brilliant, among other things.

Like most Criterion releases, this disc has excellent sound and picture owing from the new 4K restoration. It's nearly flawless. I enjoyed reading the included essays about the film and its director. My favorite special feature was critic Imogen Sara Smith, who has an endless well of knowledge on this film and its players.

To read more, watch a trailer, and add Pickup on South Street to your home video collection, head over to Criterion's page for the film here.