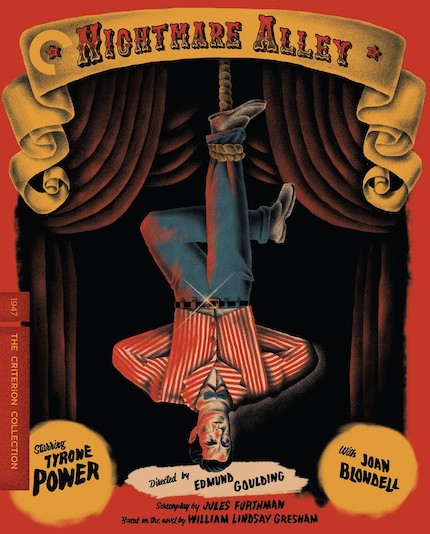 The Criterion Collection releases the original 1947 film Nightmare Alley in just over two weeks' time in North America. Directed by Edmund Goulding (Dark Victory with Bette Davis and Grand Hotel, the Academy Award winner for Best Picture in 1932), this film was adapted from the lurid, bestselling novel by William Lindsay Gresham.

The book put Gresham on the map, and he went on to write more fiction, as well as non-fiction, but he never again achieved the critical and public acclaim of his very first book. He also went on to cheat on his wife with her cousin, whom he later married... while his wife traded up and married the more successful author, C.S. Lewis (The Chronicles of Narnia series). Gresham also committed suicide in a hotel room, due to a tongue cancer diagnosis, and likely, his personal demons.

These footnotes are digressions for sure, however, it's interesting to take them into consideration when looking at the source text (novel) for this film.

Nightmare Alley is the story of Stanton Carlisle, a shady mentalist who enjoys manipulating his audience for financial gains and kicks. But he doesn't stop there --- he plays mind games with his friends and associates, climbing the ladder of success with unchecked greed and zero conscience --- until he meets someone who out maneuvers him on both accounts and sends him running from the law and into true ruin.

Played with aplomb by Hollywood superstar Tyrone Power (Rawhide, The Mark of Zorro), who begged 20th Century Fox studio head Darryl F. Zanuck to star in this adaptation so he could showcase a deeper side to his acting talent. Zanuck (who rose out of poverty and abandoned orphan status to the lofty role on wits and talent, but that's anothe r story) acquiesced, but then buried the film, taking Nightmare Alley out of theatres only two weeks after its premiere. (Such a short theatrical run wasn't nearly as common then as it is today.)

Joining Power in his role of Stanton (or "Stan"), was Joan Blondell (Blondie Johnson, Gold Diggers of 1933), another big star and pre-Code darling, in addition to newcomer Colleen Gray (Red River, Kiss of Death) as Molly, who marries Stan, and Helen Walker (Brewster's Millions, Impact) as Lilith, Stan's criminal partner and master manipulator. The rest of the cast are as fantastic as the leads, and Goulding's direction is superb. Prolific cinematographer Lee Garmes (uncredited on Gone with the Wind, Shanghai Express, the original 1932 Scarface) was also in top form on the film.

I don't want to give too much away, but this sordid noir packs more human truth in it than most --- and it is engrossing to watch unfold. There are twists and turns, both of the plot kind and in the main character arc in terms of guilt and his rise and fall in life and social status. The studio tacked on a happy ending of sorts (which the novel didn't have), but I'm not sure how much difference it would make in the inner life of Stanton.

Another footnote: Nightmare Alley is considered to be a cursed film of sorts, widely suppressed by the studio, who didn't really care for the downer content. Power himself died very young at age 44, of a heart attack on the set of Solomon and Sheba while filming a sword fight... shortly after filming a PSA on recognizing the early symptoms of oncoming heart attacks. Sadly, that PSA was his last completed, full work. His role in Solomon and Sheba was replaced by Yul Brynner. Helen Walker died of cancer at only age 47, but not before her house burned down.

There was a DVD released in the early 2000s, and poor, degraded bootleg copies of the film before that. It's not really until now, at this point in film history, that this intriguing, carny noir has been widely available in an optimal format.

In this case, Nightmare Alley was sourced from a beautiful nitrate print and restored to this gorgeous 4K presentation. Sound is also excellent; this release is a real winner.

I loved critic Imogen Sara Smith's video essay on the film and its history; I could listen to her talk about film for hours. Here's hoping we see her even more on future Criterion releases. Carny historian and performer Todd Robbins' interview was also illuminating, and it was fun to see the film's last remaining star speak about Nightmare Alley. (At least, it was likely that she was the last cast member standing, in 2007 when the interview was recorded. She's now passed on.)

Strangely, the official list of "special features" on Criterion's website doesn't list the tarot cards included with my review copy. I don't know if that's an oversight or if I'm just lucky, but they're wonderful. Here's a shot of what I received in my release:

The cards are illustrations of the main characters (and of the setting and a sub-theme). They're gorgeous. I haven't seen any release include something like this, and it was a bit of a thrill to find them tucked in the great fold-out essay from Kim Morgan, who co-wrote the screenplay for the newest Nightmare Alley adaptation with maestro Guillermo del Toro. (That film is scheduled to be released in early December 2021 as of this post.)

Add this engrossing film to your home video collection by heading to Criterion's page for the film here. But hurry --- add this release and any others that have been on your mind soon. Criterion has a 30% off sale through May 31st.