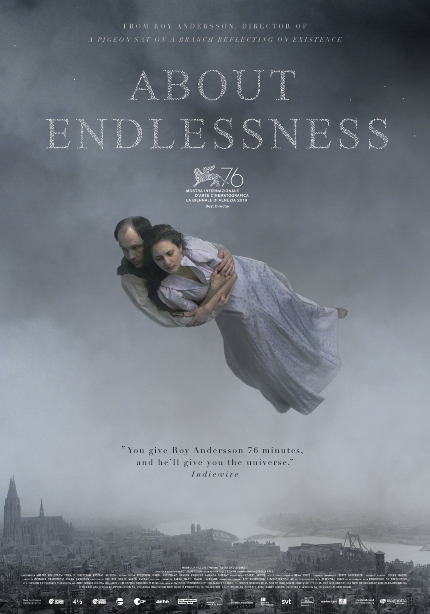 The expression "You either you love [insert name here]'s work or you hate it" is a phrase perhaps a bit oversued, but I'm not sure there is a filmmaker to whom it more readily applies than Roy Andersson.

His films are a series of short vignettes that centre on the mundane and the fascinating, in a strange universe that is both isolated from and wholly a part of our own. While it features Andersson's signature and unique style, this latest addition to his ouevre seems to be asking deeper questions, asking the audience to consider the meaning of time and our place in it, while perhaps finding greater hints of hope than we might dare to have in our current state.

The film opens with a man and a woman flying over a city in ruins; the voice of a young woman is heard describing what she sees. This narrator will continue her observations throughout the film, which, like Andersson's past work, has a few recurring characters and situations -- the main one being a priest who dreams of carrying a cross through the streets, and seems to be losing his faith -- as well as moments of life, from a man coming into a bar to look for his blind date, to a young shopgirl watering an outside plant, to a young mother having to remove her broken shoes.

It feels as if our narrator is some kind of historian or anthropologist, someone with only the most basic understanding of humans and the names for things, and she steps into each situation as an observer who must report her findings to a higher authority, without the proper tools for contextualization, or knowledge of what are the more important moments of life to observe. Hence, at one moment, we watch a man and a woman drink champage; in another, prisoners of war being marched through the cold and snow to their Siberian prison.

There are usual characters (and many of the same actors) that populate Andersson's film, with their pasty-white make-up, and the scene set-up, a camera in one spot with everyone performing before us -- that are reminiscent of some kind of early theatre or silent film where no one told the non-professional actors exactly what to do. This time, there is more of a focus on (as the title suggests) endlessness: to be more specific, the time that passes, and how we fill it. How, in our need to fill the time in which we exist, do we make connections, or become alienated from one another? How do we find meaning in longing and isolation? How do we find moments of beauty and joy, and more importantly, communicate that with our neighbours, friends, lovers, countrymen?

Andersson is not offering any easy answers, though he does seek, perhaps a bit more with this film than with his past ones, to provoke (there's a pretty astounding vignette with a certain long-dead genocidal maniac that definitely had me a bit stunned). His films never give their answers easily, steeped as their are in his Swedish culture, where (and perhaps this is my mistaken impression as an outsider) a cold surface exists that belies hearts and souls too often unable to process the seeming meanlessness of existence.

And yet, if this is how some future human or alien will look on us, if this is a recording of what is left after the demise, like the couple floating above the city who are somehow granted moments in the past to witness, what will it say about us? That we are kind, stupid, living, lonely, rude, funny, strange, and perhaps above all, hopeful. About Endlessness (oddly) may clock in at a relatively short 76 minutes, but like the rest of his ouevre, time is not a factor when there are so many stories to tell.

Review originally published during the L'Etrange Film Festival in September 2020. The film will open in U.S. theaters on April 30, via Magnolia Pictures. Visit the official site for more information.

Do you feel this content is inappropriate or infringes upon your rights? Click here to report it, or see our DMCA policy.
Anja BromsBengt BergiusMarie BurmanRoy AnderssonSweden

More about About Endlessness