A Local Ritual Turns Deadly in Trailer for SILO 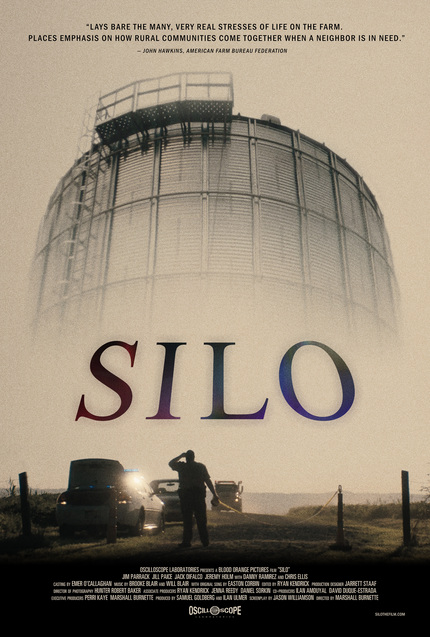 When I was a kid, there was a news story that held sway on television and in newspapers for what seemed like several days: young girl had fallen down an abandoned well. It wasn't a simple matter of just sending down a rope to get her out, hence the story's dominance in the news cycle. But there is something to be said of humans trapped in a Schroedinger's Cat scenario: in recent years, the stories of the Chilean miners trapped underground and the Thai students trapped in a flooded cave made headlines (the former already a film and the latter soon to be one) have captivated us for terrifying reasons.

Silo tells the story of a teenage boy who, thanks to a sort of 'ritual' for young men starting farm work, ends up trapped and drowning, so to speak, in a silo filled with corn. We've likely all scene these giant towers dot the rural landscape, and I shudder to think about the horrors of falling inside. Based on the short documentary of the same name, made by the same director, Marshall Burnette, hte dramatization of the terrible event is part of a larger story of the state of farming and farmers in 21st century America.

Inspired by true events, SILO follows a harrowing day in an American farm town. Disaster strikes when teenage Cody becomes the victim of a grain entrapment accident. Family, neighbors, and first responders must put aside their differences to rescue him from drowning in the 50-foot tall silo where corn quickly turns to quicksand. Shedding light on an issue plaguing rural America, SILO shows how dangerous modern farming can be, while also highlighting the ways in which communities band together to look after one another.

The film is scheduled for release in the USA by Oscilloscope on May 7th, in theatres and virtual cinemas. Check out the very tense trailer and stills below.

Do you feel this content is inappropriate or infringes upon your rights? Click here to report it, or see our DMCA policy.
Jack DiFalcoJeremy HolmJill PaiceMarshall BurnetteSilo