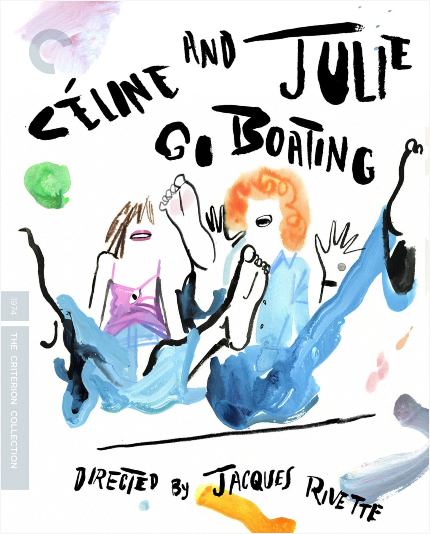 The Criterion Collection presents, as usual, a fascinating collection of titles coming up in March 2021, which should appeal to a wide variety of cinematic tastes. Jacques Rivette's Céline and Julie Go Boating is a title that has long been revered on the arthouse circuit. It's described as "a time-warping adventure involving a haunted house, psychotropic candy, and a murder-mystery melodrama," which makes me finally want to see it. (Previously, I've been put off by its 193-minute running time. But if you're watching at home, who cares about running times?)

Before seeing Meryl Streep in Albert Brooks' Defending Your Love, I never fully appreciated her comic abilities. The neuroses of Mr. Brooks have never been placed in greater relief before. It is very mainstream, not very genre, yet eminently re-watchable.

Criterion's description -- "Born from a painstaking process of rehearsal and improvisation with a powerhouse ensemble cast" -- could apply to most of Mike Leigh's films, but Secrets & Lies dives deep into what it means to be family. Its themes seem more timely than ever.

I am nearly completely ignorant of African cinema, so Touka book sound especially intriguing: "Djibril Diop Mambéty paints a fractured portrait of the disenchantment of postindependence Senegal in the early 1970s. In this picaresque fantasy-drama, the disaffected young lovers Anta and Mory, fed up with Dakar, long to escape to the glamour and comforts they imagine France has to offer, but their plan is confounded by obstacles both practical and mystical. Alternately manic and meditative, Touki bouki has an avant-garde sensibility characterized by vivid imagery, bleak humor, unconventional editing, and jagged soundscapes, and it demonstrates Mambéty's commitment to telling African stories in new ways."

The previous-announced World of Wong Kar Wai, collecting seven of the auteur's films, is also due for release in March. Read more about all these titles, and place your advance orders, at the official Criterion site

Do you feel this content is inappropriate or infringes upon your rights? Click here to report it, or see our DMCA policy.
Blu-rayDjibril DiopDVDJacques RivetteMike LeighThe Criterion CollectionWong Kar Wai