The Way of the Samurai is an absolute surplus of special features, apparently. 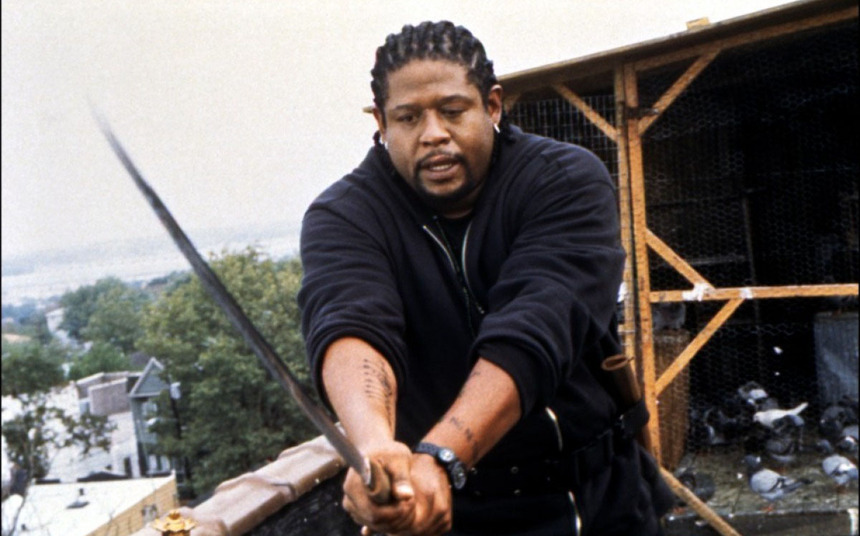 I saw Jim Jarmusch's 1999 film, Ghost Dog: The Way of the Samurai, a long time ago, and didn't remember it well beyond vague feelings and dreamy after-images. Revisiting it this week ahead of its release as part of the Criterion Collection (spine #1057), those memories proved on-point. There is a meditative purity to Ghost Dog, playing perfectly to Jarmusch's strengths (think Only Lovers Left Behind or Paterson, not Night on Earth or Down By Law). It's an absorbing rewatch, one which only seems to have gained power in the 21 years since its theatrical release.

All of which might make it sound like Ghost Dog is too ephemeral or elliptical to really sink one's teeth into, which couldn't be further from the truth. It plays so adroitly with broadly entertaining film forms -- mobster movies, hit-man movies, and of course, jidai-geki -- that it's incredibly fun to watch. (A passing knowledge of Jean-Pierre Melville's Le Samourai helps, but is not essential to, this fun.)

Forest Whitaker plays the titular Ghost Dog, a Black contract killer whose life was once saved by an aging mob underboss (John Tormey). Since that life-altering day eight years ago, Ghost Dog has absorbed Yagakure Tsunemoto's Hagakure: The Way of the Samurai and lives his life by its koan-like passages. He can now be summoned only by carrier pigeon (complex, or even impossible, communication is a prevailing theme throughout), and carries out work for his "master" faithfully and flawlessly -- until, of course, something goes wrong.

When the mob turns against Ghost Dog and starts hunting him -- futilely, hilariously, ineptly -- Ghost Dog's samurai teachings are put to the test. This unlocks the thematic core of the film. Whether samurai or mobster, the major characters are living out codes of dying tribal orders; there is even the (more than passing) suggestion that none of them are actually what they claim to be, beyond their own behaviour; they might basically be cosplayers. (The mobsters, for example, never do anything -- they sit around in a restaurant like mobsters in a mob movie. They're also behind on the rent.)

The film has been restored in 4K for this release, and Robby Müller's cinematography looks splendid in blu-ray. Night scenes, as Ghost Dog glides through Jersey City in a succession of stolen luxury cars listening to RZA, are fluid and clear. A late-film trip to rural New York State -- in autumnal bloom -- pops beautifully.

The real surprise on the release is the seemingly bottomless supply of special features, which begin to make their presence felt as soon as you open the blu-ray case; a tiny reproduction of Hagakure: The Book of the Samurai falls out, containing the thirteen passages quoted in the film. The usual Criterion booklet of essays is also fatter than we've seen in a while, featuring an essay by Jonathan Rosenbaum, another by Greg Tate, and an archive interview with Jarmusch, reproduced from Projections 11: New York Filmmakers on Filmmaking.

Then you crack open the Supplements section of the disc itself, and the exploration continues. There is a nearly ninety minute audio track of Jim Jarmusch answering fan questions about the film, and nearly every second of it is insightful, even if its accompanying image of a blurry, bird-filled screencap from the film makes it feel a bit like a weird YouTube video or webinar. Jarmusch also acknowledges the tenuous connection between the (fictional) novel Night Nurse, seen in the film, and the Marvel comic of the same name.

Forest Whitaker and the wonderful Isaach de Bankolé join the extras in a half-hour, Skyped discussion with Michael Boyce Gillespie. Surprising no one, Whitaker and de Bankolé are virtually unchanged, and cool as hell. (One wonders if Skyped supplements for Criterion will simply become the norm from here on out; they must be, in many ways, easier and cheaper to produce.)

Casting director Ellen Lewis is interviewed as well, and in another segment, the founder of the U.S.' Shaolin Temple, Shifu Shi Yan Ming. The latter, though brief, is a fun reflection on the inevitable system of connections that have grown up between Shaolin and the pop culture that has popularized it in the West. Master Shi Yan Ming's comments on the prevailing philosophies of Jarmusch, as seen in his films, ring true. (He's also the guy who opens up that memorable can of whup-ass on a would-be mugger, briefly, halfway through Ghost Dog.)

There are a bevy of archival featurettes from earlier releases of Ghost Dog, as well as deleted scenes and outtakes, and a fifteen-minute video essay exploring the music of the film with RZA. It's an exhaustive, authoritative collection throughout.

Finding this film again this week notched it up my list of all-time favourites from Jarmusch. (It is also, I'd note, a somewhat-unheralded yet-another-masterpiece from its year, the much-discussed 1999.) It rewards rewatching with a sophisticated reading, but is charming enough to be a good entry film for anyone not familiar with Jarmusch's work. I may watch it again even before this review hits your feed.

Do you feel this content is inappropriate or infringes upon your rights? Click here to report it, or see our DMCA policy.
Forest WhitakerIsaach de BankoleJim Jarmusch

More about Ghost Dog: Way of the Samurai