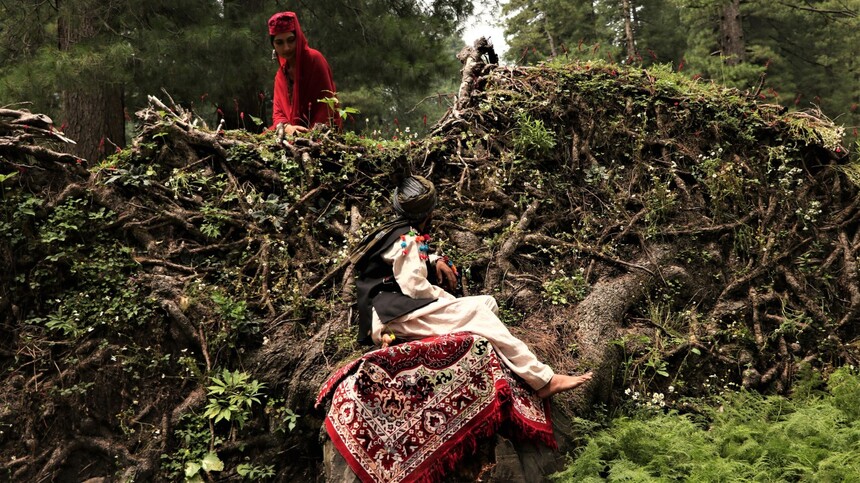 In the vast and gorgeous region of Kashmir (which most outsiders might only associate with its contestation between India and Pakistan), nomadic tribes still live difficult but not unpleasant lives, herding their animals beneath the beauty and drama of the Himalayas. Though their existence is under constant threat of the increasing and generally useless bureaucracy and scrutiny of civil servants and police. Magic still exists in these forests and mountains; Pushpendra Singh’s luscious tale The Shephardess and the Seven Songs, inspired by poetry by 14th century mystic Lalleshwari and an old folktale, infuses this magic to the modern world as one particular woman struggles for independence of body, mind, and spirit.

It seems that Laila (Navjot Randhawa) has no choice but to marry Tanvir (Sadakkit Bijran), after he proves his worth to her tribe by lifting a very heavy stone. But Laila doesn’t really want to marry anyone; she’s obsessed with Lalleshwari, who left an unhappy marriage to follow a spiritual quest. But Laila has no such option. Now part of her husband’s tribe, her physical beauty is all anyone can see, and this makes her the lustful target of several men, including the chief police inspector, and the local ranger Mushtaq (Shahnawaz Bhat), whose crush quickly turns to obsession. For Laila, much of this is background noise, as she chafes under restrictions that force her into a life she doesn’t want.

Divided into seven songs that follow Laila’s journey, as she assess her situation, and plays a possibly dangerous game with the men around her. But why shouldn’t she? To her husband, she is an object, a prize her won whose sole value is as a mother and worker. To the men who lust after her, she is also a prize, and one that is rightfully theirs, simply because they want her. She beats up the inspector (which of course means she must be possessed by the devil), and she teases Mushtaq with inviting him to join her in the night but always somehow bringing Tanvir with her. Laila wants the joys of sex, but on her own terms, a desire made impossible by her circumstances. She longs for knowledge beyond her reach, and as she moves with the tribe, so she feels these songs of regret, attraction, and disappointment.

Each chapter is both a fable in and of itself, and part of the larger story, one that has gone on for women for centuries: at what point can they follow their own path, if they are given the tools even to see it? Laila does not want for the basic necessities of life, per se, but neither does she have much choice. Singh presents a people both stuck in their ways and customs, and yet at the same time, those customs do protect them, a protection that is chiseled at by the modern world and its pointless bureaucracy.

Despite its modern setting, Singh does present a fairy tale, on in which animals and nature play a part, as witness and bit players in Laila’s fable. The animals protect her; she both is a painting against and a blend into lush trees around her; her red hat a slash of blood and anger she constantly carries. The film unfolds almost like a theatre shows, traveling like the nomads from place to place, picking up its story like crumbs along the route, each a new piece of the puzzle. As Laila reaches the final song and discovers and embraces (literally) her destiny, renouncing that which has held her back, and becoming a different part of the magic surrounding her.

Feeling like a fireside tale told over a few winter nights, The Shephardess and the Seven Songs weaves its magic like the slow, colourful thread of the region; a tapestry of many stories in one, a journey through a people’s shifting world that they try (in vain) to hold steady, and one woman’s journey to be something greater than she dreamed.